In the working-class neighborhood of Bulaq al-Dakror, a group of men gathered 28 July to prevent what they called a “fitna,” or discord, in Egypt.

“I’m creating an antibiotic for the Egyptian people. I’m trying to protect my society,” one protester, Saad, declared. Another held up a sign instructing Iran to “round up its dogs.”

Protest organizer Walid Ismail of the Facebook group “the Coalition of Muslims for the Defense of the Prophets’ Companions and Descendants” angrily held up screenshots of Facebook comments by the subjects of his wrath, Egyptian Shias.

Ismail read out the comments — a barrage of curses and insults against the companions of the Prophet Mohamed, his wife Aisha and Sunnis in general.

The group filed a police complaint against three Shias who they alleged insulted the Prophet’s companions online, on TV and, most recently, in a mosque in Bulaq al-Dakror.

The public prosecution heard the complainants’ testimony Sunday and, according to media reports, “identified” the individuals.

In a separate case 28 July, a Kafr al-Zayat criminal court in the Delta region handed down a one-year sentence, reduced from three years, to a man found guilty of “desecration of a place of worship.” Exactly what Mohamed Asfour allegedly did is unclear, even to his lawyers, but if rumors are to be believed, problems began after he converted to Shiism, prompting the animosity of his neighbors and his wife, who demanded a divorce.

An incident between Asfour and some of his foes allegedly happened in the village mosque in Abul Ghar, and police were called. Some say Asfour was caught praying on a stone — a Shia practice that follows Prophet Mohamed’s practice of praying directly on earth, without using a prayer rug.

Saad referred to the Shia “surge” on Egypt as a “national issue.” Shias, he insisted, “want to change the [Egyptian] people’s identity.”

The irony is that Egyptian identity has been shaped by Shia influences since the 10th century. The tradition of Ramadan lanterns that has spread throughout the Arab world, for instance, began when Egyptians welcomed the Shia Fatimids with lanterns.

Egyptian Sunnis visit important shrines in Cairo such as Al-Hussein and Sayeda Zeinab, and celebrate the deceased in a manner that overlaps with both Shia and Sufi practices. Followers of conservative Wahhabi Islam who view these practices as aberrations often rebuke them for doing so.

Egypt’s religious identity is now up for grabs, with the resurgence of hardline Salafi groups and a rising Muslim Brotherhood. More than an expression of spiritual conviction, this fight is a thinly masked power struggle — a product of the new realities after the 25 January revolution and the renewed battle for regional influence following the changes wrought by revolutions and political mobility across the Arab world.

The reaction to Lebanese Shia cleric Ali al-Korany’s visit to Egypt illustrates the political dimensions of the issue and the sensationalist way media are covering it.

Korany, a messianic imam based in Qom, Iran, came to Egypt in May. The Egyptian press responded with hysterical headlines about “the Shia surge” in Egypt, Iran’s plans to influence the country through its Egyptian Shia proxy, and Korany’s opening of the “first Husseineya in Egypt.”

The media is now particularly obsessed with Husseineyas, loosely translated as community centers where people gather to meet, hold celebrations and practice Shia rituals such as mourning ceremonies.

While there are no public Husseineyas in Egypt, Shia refugees from Iraq who came to Egypt in the 1990s and following the 2003 invasion established informal ones. Egyptian Shias, such as 58-year-old Emad Qandil, also open their homes to their co-religionists.

One day in May while Qandil was at work, he received a call from a journalist from Al-Watan, who requested an interview.

“I asked them where they were. They said, ‘In your house,’” Qandil said.

Ismail, the Facebook group organizer, had taken journalist Mona Madkour to Qandil’s house in Ragdeya village near Tanta, and they were given access to it by Qandil’s unsuspecting 13-year-old son.

Madkour wrote in her article that Al-Watan “was able to break through the barrier of secrecy imposed by Egyptian Shia on the location of the first Husseineya to recently open in Egypt.”

The article incorrectly says Husseineyas are “sacred places that can only be entered by Shia” while ignoring the fact that the walled front porch Qandil allegedly uses as a Husseineya is the entrance to his home.

Following the publication of the article, Qandil said Salafis in the village began agitating against Qandil, who received a warning of plans to attack the alleged Husseineya in his house.

“Nothing happened because I have good relations with everyone in the village,” Qandil said.

Like all the Egyptian Shia Egypt Independent spoke with, Qandil was adamant that Islamist attacks on Shia are given the green light by Egypt’s security bodies, notorious prior to the revolution for their monitoring by religious groups.

“Security bodies let them attack Shia from pulpits because Saudi Arabia wants them to — and Saudi Arabia pays,” he said.

Throughout history, a changing state position

It wasn’t always like this, said Egyptian Shia thinker Saleh al-Wardany, whose iconoclastic approach to religious matters gets both Sunnis and Shias hackled up.

Wardany, originally a Sunni Egyptian from Assiut, converted to Shi’ism in the 1980s. Detained on several occasions as part of the regular crackdowns on Egyptian Shia that took place at the height of anti-Iranian sentiment in the 1980s, the writer has a store of anecdotes from his time in Egyptian jails.

He recounted the three years he spent with members of the Islamic Jihad group detained after President Anwar Sadat’s assassination — one of whom he said spent 12 years studying antiquities, refusing to graduate because of his conviction that antiquities are haram.

“Iran has ruined our lives,” Wardany said. “State security and others make the mistake of thinking that everything has a connection with Iran. … They hate any outsider to have contact with Egyptians because they consider citizens simple, kind people who, if they rise up, must be under the influence of a foreign hand. And if there isn’t a foreign hand, they’ll invent one.”

Wardany said the idea that Shi’ism is imported or alien to Egypt is preposterous, and traced three generations of Egyptian Shias.

The first generation was contemporaneous with Ali, the Prophet’s cousin, who first stirred the dispute over who should follow Prophet Mohamed in leading Muslims after the latter’s companions, who were not blood relatives, took over. Wardany suggested that this generation ceased to exist after years of Sunni rule.

The second was Iranians who immigrated to Egypt in the 19th century and retained their Shia faith. Former Egyptian President Gamal Abdel Nasser’s wife was herself a descendent from this group.

Finally, there are converts, many of whom were drawn to the faith after the Iranian revolution and the media campaign against Iran under Sadat. Many are former members of Islamist groups such as Islamic Jihad and the Brotherhood.

Disenchanted with the jihadist movement’s failure, these men found an alternative in Shia Islam and the new Islamic state being chiseled out by Ayatollah Khomeini.

Sadat’s hostility toward Iran — the result of Egypt’s ties with Saudi Arabia and his concern that the Iranian revolution would be exported — was a reversal of Nasser’s support for Shia clerics who opposed the shah, and whom Nasser viewed as revolutionaries against corruption.

A political, not religious, struggle

Shia activist Mohamed Ghoneim said hostility against Shias is political rather than religious and revolves around Saudi Arabia and Iran’s competing ambitions.

Like many Shias Egypt Independent spoke to, Ghoneim is staunchly secular and supported ex-Prime Minister Ahmed Shafiq in the presidential election runoff because he opposes religious political parties. He saw the revolution as an installment in the Sunni-Shia regional power struggle designed to offset rising Shia influence in the region by facilitating Sunni Islamists’ ascent to power.

Emile Hokayem, senior fellow for regional security at the International Institute for Strategic Studies, outlined this theory in a column published in The National.

“The story reads this way: Iran won the first rounds, when it helped Shia parties grab Iraq from Sunni clutches, groomed Hizbullah into a powerful force in Lebanon, and consolidated its alliance with the Alawi House of Assad in Syria. This drive has now been stopped and is being reversed, starting in Syria,” Hokayem wrote.

“Egypt’s Shia are currently paying the price for what Shia in other countries are doing. Egyptian Shia as a whole have no effect on national security, and we know that they could gather us all up in police trucks and silence us in a day. But the objective of what is happening with Egypt’s Shia is to send a message abroad,” he said.

Wardany was disdainful of Egyptian Shias who allegedly received funding from Iran, saying, “Iran has poisoned the situation of Shia in Egypt by paying individuals who are either insignificant or not actually Shia.”

He said Egyptian Shias must assert a self-contained and autonomous identity not linked to an external entity. He opposed visits by Shia figures such as Korany not only because they “are used by security bodies for their own objectives,” but because Egyptian Shias have their own culture. 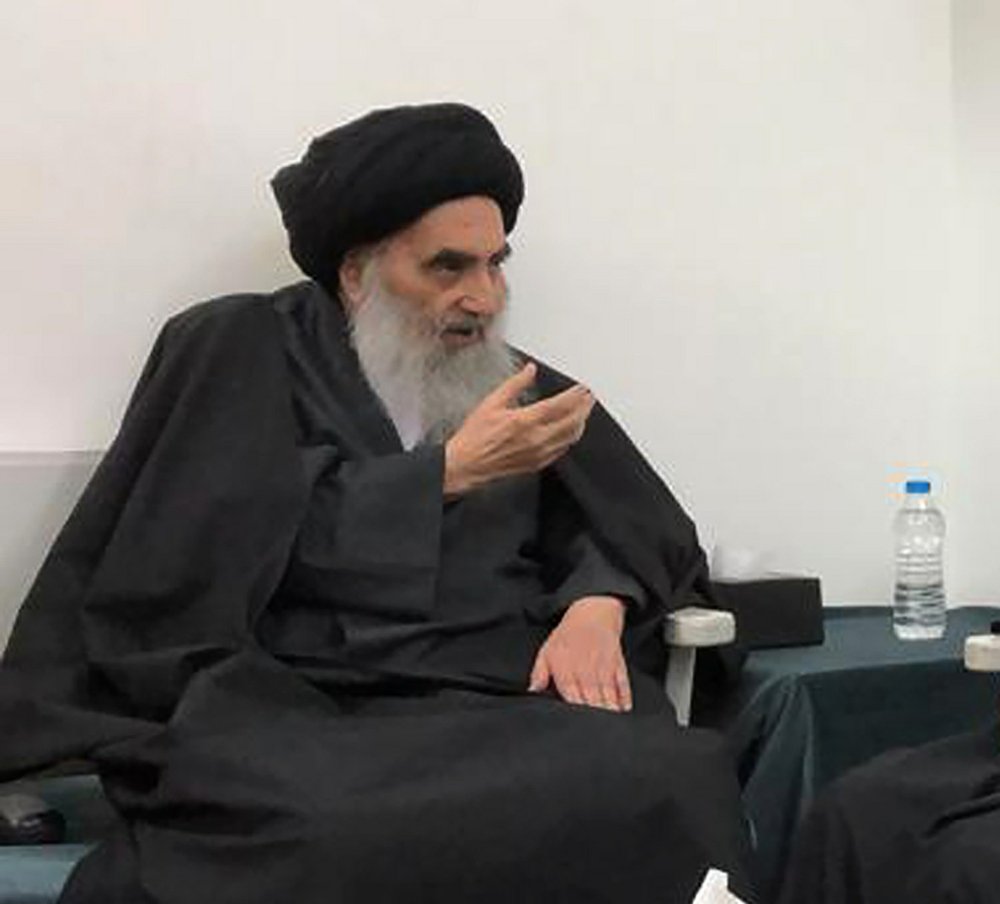