The Egyptian embassy in Canberra, Australia received the fourth and final part of the stone panel of “Sheshn Nefertem”, which was illegally stolen and smuggled from Egypt. Egypt recovered three parts from Switzerland in 2017.

The fourth part was exhibited at the Macquarie Museum, said the director of the museum, Martin Bommas, who showed willingness to return the fourth part to Egypt immediately after he learned that the painting was stolen and smuggled illegally, according to Shaaban Abdel Gawad, General Supervisor of Recovered Antiquities Department at the Ministry of Antiquities.

The museum handed over the artifact to the Egyptian embassy in Canberra after the Egyptian ministries of antiquities and foreign affairs submitted documents proving Egypt’s ownership of the artifact, Abdel Gawad said.

An archaeological mission of the University of Rome found the four parts of the stone artifact during an excavation at the Cemetery of al-Asassif on the western bank of Luxor between 1976 and 1988.

During an inventory at the Qurna museum on the western bank of Luxor in 1995, officials discovered the four parts were missing.

Abdel Gawad added that the whole stone panel is due to be restored after the arrival of the fourth and final piece so that all the parts can be assembled together and displayed in full. 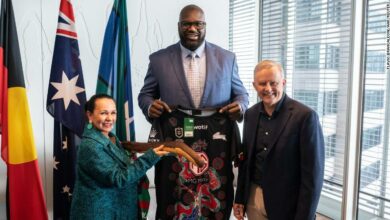 Egypt receives $1.3 bln for ‘Ramses the Great and the Gold of Pharaohs’ exhibition in San Francisco

Ethiopian Airlines flight sleeps on its way to Khartoum