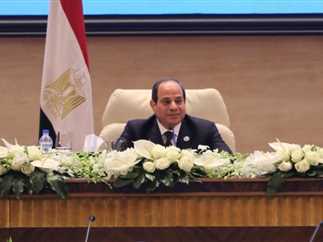 If not for economic reforms, Egypt would have been ruined, he said during the first conference of the A Decent Life initiative during the 7th National Youth Conference at the new Administrative Capital.

According to Sisi, the economic situation in Egypt has improved since 2012.

A Decent Life aims to maximize Egypt’s assets and envision the best solutions to aggravated problems such as power cuts, sanitation issues and insufficient drinking water, with the aim of improving economic performance, he added.

“We need to work and be patient so we can change our reality,” he said.

A Decent Life targets residents of slums in accordance with Sisi’s instructions, Prime Minister Mostafa Madbouli said, pointing out that millions of citizens still need the support of the initiative.

Sanitation services in rural areas have improved between 10 and 35 percent since 2014, Madbouli said.

Beside the government sponsored initiatives of Takaful, Karama, and A Decent Life, civil society organizations and private institutions have also launched other initiatives that contribute to improving services.

Hala Al-Saeed, Minister of Planning, said that civil society efforts must be combined with government efforts to achieve the best outcome.

Factors reducing poverty rates are many, the most important of which are improved education levels, increasing health levels and bolstered social protection programs, Saeed mentioned, pointing out that overpopulation increases poverty rates.

The representative of the French company Schneider Electric, specialized in digital transformation and energy, said that the company contributed to the initiative A Decent Life by providing job opportunities, implementing solar energy projects in remote villages and digging to underground water using solar energy.

A Decent Life is an initiative launched by Sisi in January with the aim of providing better living conditions for the poor in 2019. The initiative depends on joint efforts between the government and civil society organizations.