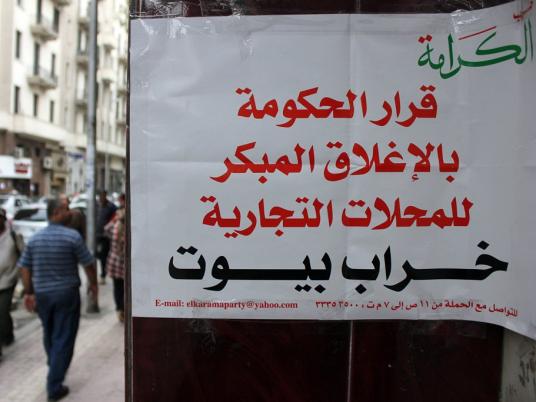 by Local Development Minister Ahmed Zaki Abdeen to postpone indefinitely the law that would close shops at 10pm put a halt to a growing controversy over the government's lights-out policy.

Multiple political parties, civic movements, business organizations, shop owners and citizens had have spoken out against the measure.

Despite the postponement of the law, the Free Front for Peaceful Change has called for a march to protest against the principle of the lights-out policy law on Monday afternoon.

Experts say the law, and its last-minute postponement, point to the lack of economic and governance understanding of those in power.

“Postponing the law was the worst decision," said Cairo University Economics Professor Ahmed Ghoneim. “It proves the weakness of the government."

Ghoneim, who said he agrees with the general idea of the law, says the government was clearly not prepared enough to execute such a policy.

According to him, restoring security, upgrading the electricity network and putting an end to corruption are mandatory prerequisites to the implementation of the law.

Others criticize the law's reasoning and its lack of popular support.

“This is not a way of doing politics,” said Samer Attalah, economy professor at AUC. “This law concerns a very important aspect of the life of the Egyptians. People need to be consulted in the decision process.”

Attalah believes that the law, if implemented, would have done more harm than good.

The government had set forth several arguments in support of the measure.

In the midst of important electricity shortages and financial issues, officials said the measure would save electricity. Trade and Industry Minister Hatem Saleh announced up to 6 billion LE could be saved.

Ghoneim does not buy into this argument.

“First, the law needs to be implemented," he said. "And nothing says this will be the case. And even if it is, shops will keep their lights on for security reasons and people will consume more electricity at home."

Air Conditioning, used in homes and businesses, is a major source of consumption of electricity.

Attalah said the government needs to think of other solutions.

“If it really wants to save electricity, why does the government not target the main electricity consumers such as the malls or the big hotels?” he said.

According to him, the electricity consumption of small cafés and restaurants represent a minimal part of the national consumption.

Ghoneim pointed out to an un-planned consequence of forcing shop owners to close early. The shortening of shopping hours, he said, will generate more traffic. And more traffic means more energy consumption.

Another argument for the law was that it would help to bring many informal shops, cafés and restaurants into the taxable formal sector. Establishments looking to open later than the fixed hours would have to obtain an official license.

Attalah thinks it will not be the case. He says the license would too expensive for many owners. Under the law, he said establishments frequented by tourists would likely be favored, meaning a majority of the Egyptian businesses would be remain outside of the formal sector, either closing shop early or operating illegally.

Worse, both economists thought the law could open another window for corruption.

“Owners who want to keep their business open to maintain their sales and who cannot afford the license have no other choice than offering money to the inspectors,” said Ghoneim.

Corruption and tax evasion are already widely cited to be problems in obtaining business and building licenses.

Strong state institutions should be necessary prerequisites to such a law, according to Attalah. Inspectors need to receive higher wages and internal control must be reinforced to minimize corruption.

Otherwise, there is little chance citizens would abide by it.

“If the law forbidding the use of mobile phones while driving is not respected, why would this one be?” he said.

Defenders of the law have said that it could encourage Egyptians to go home earlier, which could result in them being more productive at work.

Attalah believes these expectations are unrealistic.

He suggests implementing closing time changes more gradually, starting at midnight or 1am.  Ghoneim suggested there should be longer hours on the weekends.

Opponents to the law maintain it would decrease consumer spending and employment growth at a time where the economy is already ailing. Ghoneim said any decrease in activity would be minimal.

“This law would affect the working time of night shifters more than their jobs themselves," Attalah said. "But these people are craving for extra hours to gain some extra money.”

The law, he said, would significantly affect their purchasing power.

“These cafés represent the sole leisure for a vast majority of Egyptians who cannot afford to go to clubs or in parks," said Attalah. "This law deals with a central aspect of their everyday life and may have a negative psychological impact on the society."

Egyptian Federation of Chambers of Commerce Chairman Ahmed Al-Wakil recently complained the ministerial decree was impinging on his organization's mandate and that opening hours should be decided by governorates.

Attalah agrees that the decision should be made by local officials.

Of all their criticisms, both economists agreed that the haste and lack of research by the government was worrisome.

“This law was not prepared, it shows the new regime is not functioning as expected,” said Ghoneim.

Attalah said it shows an out-dated arrogance not appropriate in contemporary Egyptian politics.

“It proves they do not understand the new identity of Egypt," said Attalah. "People will not accept any decision, even a good one, if they are not consulted. The time when decisions were taken in closed offices is over.”