Venezuela’s political crisis shifts from barricades to the ballot box on Sunday with gubernatorial elections that could hand the demoralized opposition a major victory against President Nicolas Maduro’s government.

The ruling Socialist Party currently controls 20 of 23 state governorships. But polls show the opposition Democratic Unity coalition poised to upend that, given voter anger at hunger and shortages stemming from an economic meltdown.

Having failed to remove Maduro in protests earlier this year that led to 125 deaths and thousands of arrests, the opposition hopes a strong showing can be parlayed into victory in next year’s presidential election.

The government, however, is confident of stemming losses.

It has been making liberal use of state resources in its candidates’ campaigns and is appealing to Venezuelans’ exhaustion with political turmoil to vote against the opposition’s “candidates of violence.”

The pro-government election board also has thrown up hurdles for the opposition that could impact final results.

Those include the relocation of 200 vote centers on security grounds – mostly away from pro-opposition areas – and a refusal to update the ballot to remove superfluous names of opposition politicians who lost in primaries.

Additionally, a plethora of opposition leaders and activists, including major figures Henrique Capriles and Leopoldo Lopez, are barred from office or detained on accusations of coup-plotting, corruption and other charges.

“The more obstacles they put up, the stronger we become,” said coalition election coordinator Liliana Hernandez, urging supporters to turn out despite disillusionment.

The government says Sunday’s votes, from remote Amazon and Andean communities to heavily populated Caribbean coastal areas, are proof Venezuela is no dictatorship contrary to increased foreign criticism this year.

“When you vote, you will be sending a message to the imperialists,” the Socialist Party’s powerful No. 2 Diosdado Cabello said at a campaign rally this week, blasting the United States which has imposed some sanctions on Venezuela.

“We must vote for the legacy of Hugo Chavez,” Cabello added, referring to the populist firebrand and Maduro predecessor who ruled between 1999-2013 before dying from cancer.

In contrast to the constant evoking of Chavez, the unpopular Maduro has been largely absent from his candidates’ rallies.

Even if the government loses a majority of governorships, Maduro has repeatedly said none of the newly-elected officials will be allowed to take office unless they pledge allegiance to a new legislative superbody elected controversially in July.

The opposition boycotted that vote and refused to recognize the entirely pro-government Constituent Assembly, which supersedes all institutions including the opposition-controlled congress.

“If they don’t swear, they don’t take office, full stop,” Maduro said in a speech this week.

“Then they can go and cry to Washington!”

Some opposition supporters, particularly youths in a self-styled ‘Resistance’ movement at the front of pitched street battles earlier this year, have accused their leaders of selling out and legitimizing a dictator by taking part in Sunday’s vote.

But most appear to have swallowed their qualms.

“Too many people were dying, with few results,” said student Manuel Melo, 20, who lost a kidney from the impact of a water cannon during one protest. “I agree with the elections.”

Should the government suffer big reverses, it can mitigate the practical effect by reducing funding and responsibilities for governors, as it has in the past when local posts have gone to the opposition.

After the election, the opposition will seek to throw the focus straight back to its main demands: guarantees of free and fair conditions for the 2018 presidential vote, freedom for jailed activists, foreign humanitarian aid, and authority for congress.

The government has said it hopes Sunday’s vote will help revive a stalled mediation bid with the opposition in the Dominican Republic. Any perceived dirty tricks by the government could risk more US sanctions or new European ones. 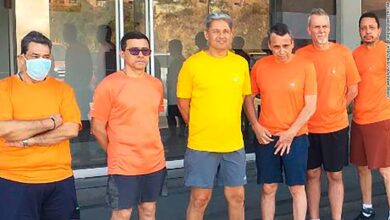 Two Americans, including one member of the ‘CITGO6,’ released from prison in Venezuela