Facebook Twitter LinkedIn
Greeks voted on Sunday in a referendum that could determine their future in Europe's common currency, with banks shuttered, the treasury empty and a population desperate, angry and so deeply split that the outcome was too close to call.
The referendum is officially a Yes or No vote on a bailout offer from creditors, but a 'Yes' could bring down the government of Prime Minister Alexis Tsipras, while European leaders say a 'No' could force a chaotic exit from the euro.
The country of 11 million people is being asked whether to accept the offer which left-wing leader Tsipras rejected eight days ago. Elected in January on a promise to end years of crippling austerity, he calls the offer a “humiliation”.
He is urging a resounding ‘No’, saying it would give him a strengthened mandate to return to negotiations and demand a better deal, including a writedown on Greece’s massive debt. 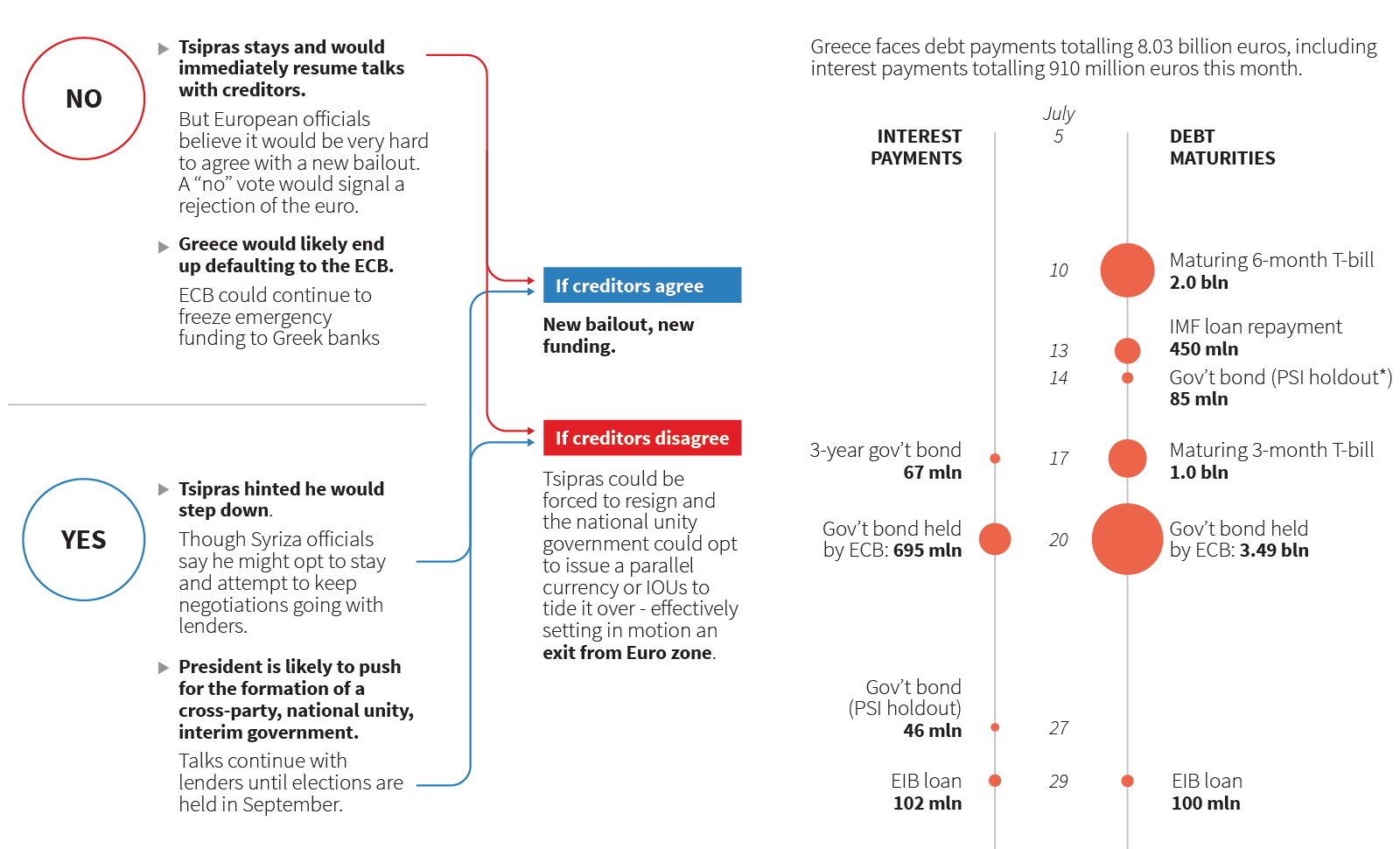 What could happen in a "yes" or "no" vote scenario after Sunday's referendum (click to expand)
His European partners, however, say rejection would set Greece on a path out of the euro, with potentially far-reaching consequences for the global economy and Europe’s grand project of an unbreakable union.
"I voted 'No' to the 'Yes' that our European partners insist I choose," said Eleni Deligainni, 43, in Athens. "I have been jobless for nearly four years and was telling myself to be patient … but we've had enough deprivation and unemployment."
Angry and exhausted after five years of pension cuts, falling living standards and rising taxes, Greeks now face closed banks, rationed ATM withdrawals and the prospect of the country literally running out of cash.
Pensioners besieging bank gates to claim their retirement benefits, only to leave empty-handed and in tears, have become a symbol of the nation's dramatic fall over the past decade, from the heady days of the 2004 Athens Olympics to the ignominy of bankruptcy and bailout.
Tsipras, a 40-year-old former student activist, has framed the referendum as a matter of national dignity and the future course of Europe.
“As of tomorrow we will have opened a new road for all the peoples of Europe,” he said after voting in Athens, “a road that leads back to the founding values of democracy and solidarity in Europe.”
A ‘No’ vote, he said, “will send a message of determination, not only to stay in Europe but to live with dignity in Europe.”
Not everyone agreed.
“You call this dignity, to stand in line at teller machines for a few euros?” asked pensioner Yannis Kontis, 76, after voting in the capital. “I voted 'Yes' so we can stay with Europe.”
Polls close at 7 pm (1600 GMT), with the first official projection of the result expected at 9 p.m.
Most opinion polls have the ‘Yes’ vote narrowly in front. But all have been within the margin of error.
‘Cannot end like this’ 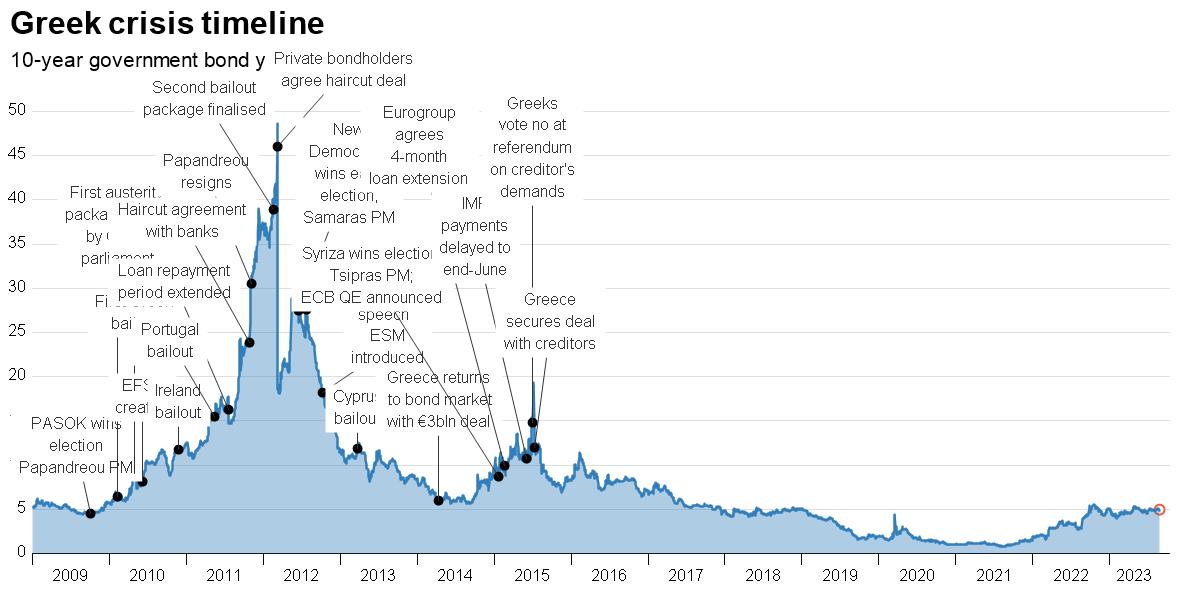 Greece 10-year government bond yield – percent (click to expand)
Called at eight days’ notice, the referendum offers Greece a ‘Yes’ or ‘No’ vote on a proposal that is no longer on the table, which would have required cuts to pensions and hikes in taxes that Tsipras says would be ruinous.
Given the chaos of the past week, in which Greece became the first developed economy to default on a loan with the International Monetary Fund, creditors say a new deal will have to be drafted, probably involving harsher terms.
Anxious Greeks rallying for a 'Yes' vote say Greece has been handed a raw deal but that the alternative, a collapse of the banks and a return of the old drachma currency, would be far worse.
The ‘No’ camp says Greece cannot afford more of the austerity that has left one in four without a job and society fraying at the edges.
Finance Minister Yanis Varoufakis, whose forceful denunciations of a deal that would bring more austerity alienated many of his euro zone colleagues, was confronted on the street after voting in Athens.
“Come with me to see the crowds of people waiting at Alpha Bank,” one man said to him.
In reply, Varoufakis repeated a pledge to resign if the ‘Yes’ vote wins. Another man asked: “Mr Varoufakis, what value will the money have? What will it be worth in the next few days? What will we be able to buy with it?”
Tsipras too has hinted that he would step down if Greeks vote to accept the bailout terms, triggering a new chapter of uncertainty as political parties try to cobble together a national unity government to keep talks with lenders going until elections are held.
The creditors say a ‘No’ vote will represent rejection of the rules that bind the euro zone nations, and may dash hopes of a negotiated deal to keep Greece within the euro.
“If they (Greeks) say ‘No’, they will have to introduce another currency after the referendum because the euro is not available as a means of payment," Martin Schulz, the president of the European Parliament, said in remarks broadcast on Germany’s Deutschlandfunk radio on Sunday.
"And how are they going to pay salaries? How are they going to pay pensions?”
Still, some European countries have held out the prospect that Greece could continue to negotiate even if it votes 'No'.
Italy's prime minister, Matteo Renzi, said it was "obvious" negotiations would have to resume as of Monday, telling the Rome newspaper Il Messaggero that Greece "cannot end up like this."
But it's equally obvious, he said, that "it's impossible to save Greece without the commitment of the Greek government: reforming pensions, fighting tax evasion, the new labour market all depend on them."
French Economy Minister Emmanuel Macron also said there must be more talks, whatever the outcome: "Whatever the vote, we must, starting tomorrow, respond with political discussions to create a framework."
On Monday, all eyes will be on the European Central Bank, which will review its emergency liquidity line that is keeping Greek banks afloat. The ECB could freeze the liquidity or cut it off altogether if Greeks vote ‘No’, or if Athens subsequently defaults on a bond redemption to the ECB on July 20.
An inconclusive result may sow further confusion, with the potential for violence.
"The nightmare result would be 51-49 percent in either direction," a senior German official said. "And the chances of this are not insignificant."
Tags
Greeks referendum

In Odessa, nannies and computer programmers step to the front line