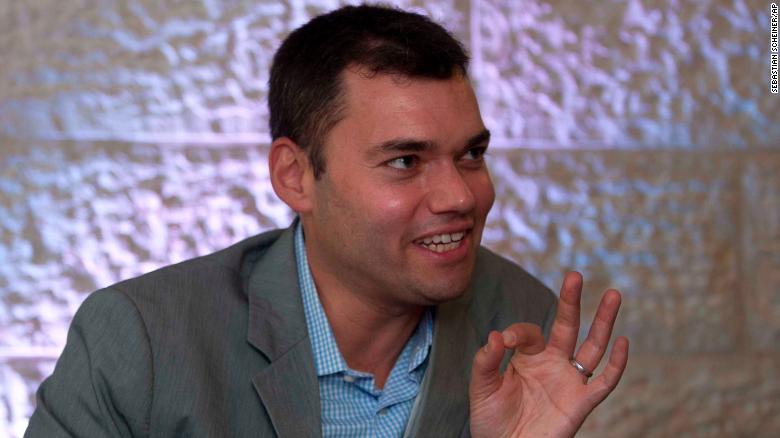 (CNN) – Peter Beinart wasn’t the first one stopped at Ben Gurion Airport, but the progressive American Jew and CNN political commentator is one of a growing list of big names who say they were detained while trying to enter Israel and quizzed on their political leanings.

In an article in The Forward, a monthly American Jewish magazine and online news outlet, Beinart wrote that he was at the airport’s passport check with his family on Sunday when he was asked to step aside for extra screening.

Writing of his interrogator, Beinart, who is also a professor of journalism and political science at the City University of New York, concluded, “He established no consistent or objective standard for my detention. His standard was whether I planned to cause trouble — trouble meaning whatever he and his superiors wanted it to mean.” 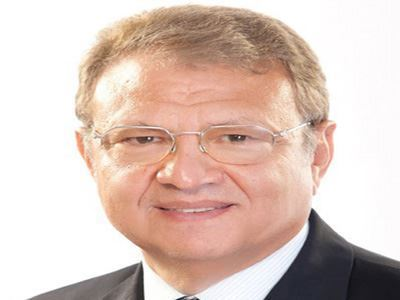 One week earlier, Simone Zimmerman, a former adviser to Bernie Sanders and co-founder of If Not Now, which opposes Israel’s occupation of the Palestinian territories, tweeted about her own experience at Israel’s border crossing with Sinai.

“We are being questioned solely about our political opinions and activities vis a vis Palestinians,” Zimmerman wrote after spending a weekend in Sinai. She says was detained by Israeli authorities for four hours, during which she was asked why she worked with Palestinians and not Jews. Zimmerman, an American Jew, currently lives in Israel, doing work for a human rights organization on a work visa.

“The scariest part is the horrifying realization of how badly the Israeli government wants to scare Jews away from Palestinians,” Zimmerman said. “They are using all tactics to make the cost of knowing & working with Palestinians too risky that we don’t dare to do it at all.”

The Israel Security Agency (ISA) denied questioning her about her political beliefs.

Israeli Prime Minister Benjamin Netanyahu called Beinart’s detention an “administrative mistake” and told Israel’s security forces to “inquire how this happened” in a statement released by his office on Monday.

“Israel is an open society which welcomes all — critics and supporters alike. Israel is the only country in the Middle East where people voice their opinions freely and robustly,” he said.

Zimmerman received no such statement acknowledging her detention.

Neither did Reza Aslan, a former CNN contributor, religious scholar and author who, inspired by Beinart’s story, wrote on Twitter about his own detention at the border crossing with Jordan two weeks ago.

Aslan said the first question he was asked was: “You think because you’re a public person I can’t do whatever I want with you?”

“I was floored. This is how interrogations begin in police states,” Aslan wrote. Aslan says he was told to write down the names of Palestinians and journalists he knows.

Aslan says he was repeatedly threatened with the same warning: “If you don’t cooperate it will be a long time before you see your kids again.” 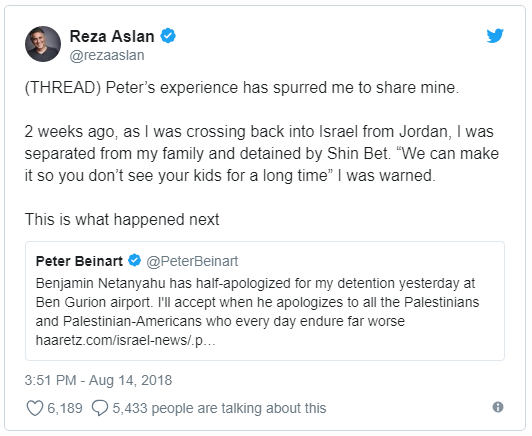 In a statement, the ISA said Aslan was detained because his behavior aroused suspicion. After a “short” investigation, the ISA said, he was released. The ISA denied posing any political questions or threatening Aslan. “It was found that [the threats] had no basis whatsoever and they have no base in reality,” the ISA said in a statement, adding that ISA actions are done “according to the law.”

On social media, Aslan, Zimmerman and Beinart went on to share stories of others being detained.

Israeli Member of Knesset Nachman Shai, from the opposition Labor party, has demanded an investigation into what he called “blacklists” and the basis for the detentions. In a letter to the State Comptroller’s Office and the Attorney General, Shai wrote, “I have no idea how these lists were formulated or who is on them. This is reminiscent of the darkest totalitarian regimes.”

“I want to know who made those lists and according to which criteria and what is behind them,” Shai told CNN. “There are lists with Interpol and terrorist lists, but who builds these lists? How did Peter Beinhart get into the list? If he called somewhere for a boycott on the settlements, does it mean that he is not allowed to come to Israel? That’s crazy.”

A spokeswoman for the ISA denied the existence of a blacklist. “When you are coming to Israel there is a security check that happens like it does in every country,” said the spokeswoman, “and during the security check there are indeed criteria, there is intelligence which exists, and there is some kind of process which allows citizens to come into the state of Israel.”

The Association for Civil Rights in Israel (ACRI), a human rights organization, wrote a letter of complaint about the border detentions to the Attorney General’s office, arguing the detentions by the Shin Bet, also known as the Israel Security Agency, are not related to security.

“Shin Bet appears to have abused the border control officers at the airport, and its own presence at the site, for purposes that have nothing to do with preventing attacks on Israeli aviation or with supervising the security arrangements at the site,” wrote a lawyer for ACRI.

In a response, the Attorney General’s office said it would inquire with the ISA about the detentions.

At the time, Minister Gilad Erdan said: “The anti-Israel boycott campaign seeks not to promote peace but to undermine Israel’s national security and existence. The state of Israel will prevent groups working to undermine its security and core interests from entering Israel.”