UNITED NATIONS (Reuters) – Libya is on the brink of a civil war that could “lead to the permanent division of the country,” a top U.N. official warned the Security Council on Tuesday as he urged the world body to stop countries that were fueling the conflict with weapons.

But he referenced recent arms deliveries to both parties. Libya has been subject to a U.N. arms embargo since 2011, but the government is allowed to import weapons and related material with the approval of a U.N. Security Council committee.

“Without a robust enforcement mechanism, the arms embargo into Libya will become a cynical joke. Some nations are fueling this bloody conflict; the United Nations should put an end to it,” Salame told the Security Council.

Any action by the U.N. Security Council is unlikely as it has been deadlocked over how to deal with the latest violence.

The most recent flare-up in the conflict in Libya – which has been gripped by anarchy since Muammar Gaddafi was toppled in 2011 – began in early April, when Haftar’s LNA advanced on the capital Tripoli. The LNA is now bogged down in southern suburbs by fighters loyal to Prime Minister Fayez al-Serraj’s GNA.

GNA-allied forces received a shipment of armored vehicles and arms on Saturday. Pictures and videos posted on their Facebook pages showed what appeared to be dozens of Turkish-made BMC Kirpi armored vehicles in Tripoli’s port.

Salame described the delivery as a “blatant and televised breach of the arms embargo,” adding that the LNA had been receiving “ongoing deliveries of banned modern weaponry.”

Since 2014, the United Arab Emirates and Egypt have provided Haftar’s LNA with military equipment such as aircraft and helicopters, according to U.N. sanctions monitors. They reported earlier this month they were investigating the likely use of an armed drone by the LNA or a supporting “third party” in a recent attack on GNA-affiliated forces.

“Many countries are providing weapons to all parties in the conflict without exception,” Salame told the Security Council.

The UAE and Egypt see Haftar’s forces as a bulwark against Islamists in North Africa.

However, Salame warned the focus of Haftar’s forces on Tripoli had created a security vacuum in the south that was being exploited by Islamic State and al Qaeda militants.

“Libyan forces that had in the past courageously defended their country against these terrorist groups are now busy fighting each other,” he said. 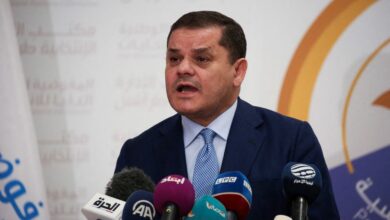