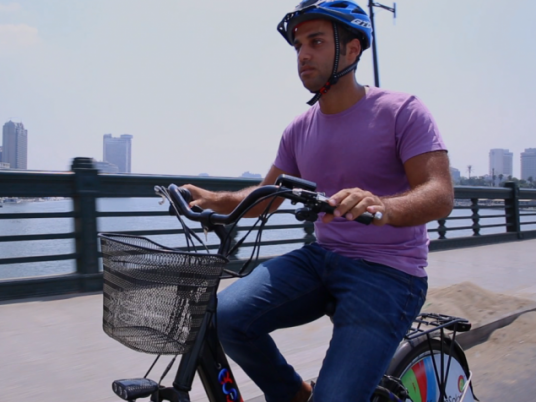 In the midst of Cairo’s unbearable traffic and heat, a young man with KarmSolar, a solar technology and integration company, rides around on a bike, a mode of transportation that is both fast and environmentally friendly. The bikes are provided by KarmSolar to all their employees and are part of their efforts to provide renewable energy discourse in Egypt.

Planet Earth has been around for 5 billion years, and before civilization the planet enjoyed a natural balance that was then overthrown by human’s compulsive need to build and consume. So says Karim El Bana, an employee of KarimSolar, specializing in business development.

People became addicted to travelling long distances and burning fuel to do so, which has resulted in a phenomenon that everyone in the world is familiar with: global warming.

“Bicycles are not only great for exercise, they also help decrease carbon emissions from cars, emissions that cause a great deal of pollution,” says El Bana.

“What we want to do at KarmSolar is send people a message: you need to use bikes more often,” he says.

KarmSolar offers bikes to all their employees to run work related errands. The company’s efforts to save the environment are not limited to offering bikes to their employees. Their main line of work is in solar energy.

“At KarmSolar, we work towards providing solar power to people who desperately need it, especially in the desert areas. One of the things that promotes sustainable energy is bikes. That’s why we promote it as an activity.”

El-Bana continues, “People think that Egypt is a very polluted country generally, but that’s not necessarily true. Egypt does not house a great deal of industry, which is a double-edged sword. On the one hand, we are not as developed as countries in Europe, for example, who are more industrialized. But our natural spaces are still preserved to a large extent.”

Cairo’s pollution is really what people think about when they say Egypt is polluted. And in this regard, bicycles are the answer, he argues, as most of Cairo’s pollution comes from the overwhelming number of cars that it contains.

KarmSolar has been Egypt’s largest private off-grid solar energy integrator for a while now, with a lot of experience in developing its award-winning high-capacity solar pumping stations, including the region’s largest off-grid Hybrid Pumping & Irrigation System.