Egypt is a massive living organism — a web of ticking clocks, each set to a slightly different millisecond. With approximately 80 million in the country, 18 million of whom are woven into the streets and buildings of Cairo, the traffic of the city may crawl but many would say it is only by the will of God that it continues to flow at all. People are everywhere — driving, jumping off buses, walking, bicycling … ticking minute by minute through the days and nights of the city. Doctors, valets, belly dancers and beggars … Cairo keeps 18 million cogs in one of the world’s busiest wheels. This series takes a magnifying glass to one person, a representative of a job that keeps the city ticking — an eye-level shot that takes you through a day in the life of a cog in the wheel of Cairo. — Nevine El Shabrawy 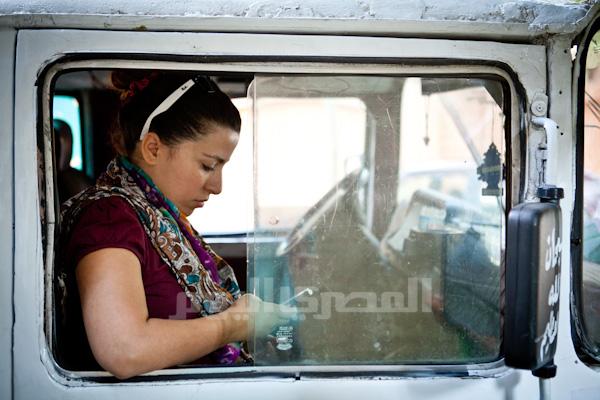 Hania Mansour is 30 years old and studies law at Cairo University, but in the last 10 days, she's been a fervent campaigner for Hamdeen Sabbahi. 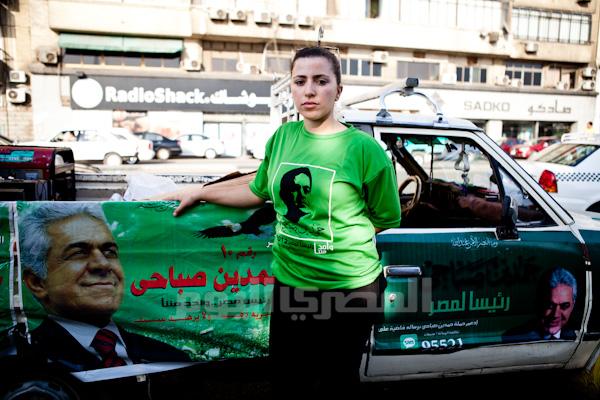 Ten days ago, Hania arrived at Sabbahi’s headquarters on the small Al-Petroleum Street in Mohandiseen and decided to volunteer as a street campaigner.

Hania is also a member of the April 6 Youth Movement. She belonged to the movement before the revolution as a blogger, and then joined the group in Tahrir, taking place in various marches and events. Her link to Hamdeen Sabbahi is also related to her membership in the April 6. "Hamdeen Sabbahi is one of us. During the revolution he was in Tahrir and in the field. He was on the frontline with the revolutionaries, like Mohammed ElBaradei, and he’s fighting for what we want. I decided to support him because I like his ideology and the way he acts." 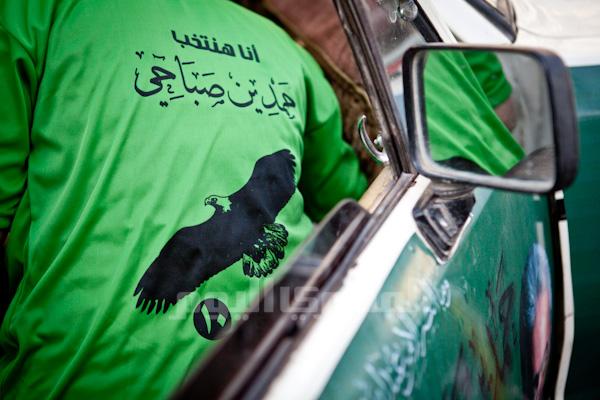 Although Hania joined the campaign just over two weeks ago, she seems to be one of the leaders. Over the past weekend she and other volunteers organized big events in Cairo. “We’re going to drive around Cairo in cars and a microbus, playing music and handing out fliers, posters and t-shirts to promote Hamdeen and hopefully gain supporters.”

Between numerous phone calls, Hania ran around headquarters to get everything ready for the tour. Beyond her role on the streets, she also helps the media team answer journalists’ questions about the campaign. 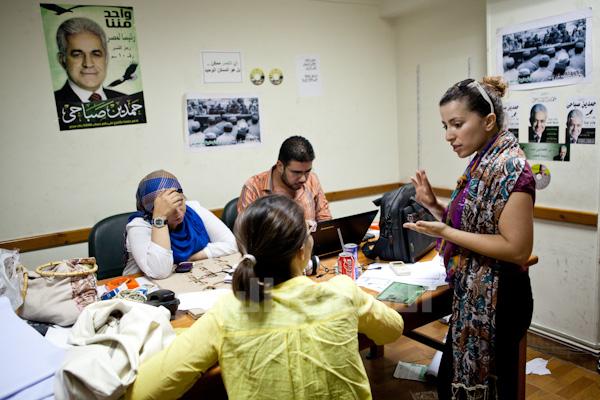 Hania arrived at the headquarters at noon on Thursday to get everything ready for the tour around Cairo. However, Hania could not participate in the tour that day as she planned to join the April 6 Youth Movement’s march for a member who died in Abbasseya three weeks ago. Her involvement in the movement is a great influence on the campaign she has chosen to support.

“With the April 6 Youth Movement, we decided to boycott the parliamentary elections. In the presidential election, we first planned to boycott Hazem Salah Abu Ismail and vote for [Abdel Moneim] Abouel Fotouh. But when Ismail was disqualified, we decided that we could choose whoever we wanted to vote for, aside from Amr Moussa and Ahmed Shafiq, the remnants of the Mubarak regime.”

Before deciding to vote for Sabbahi, Hania collected opinions from other members of the movements to see if this would line up with their ideologies. Most of the group’s members are now supporting Sabbahi or and Khaled Ali, a leftist attorney. 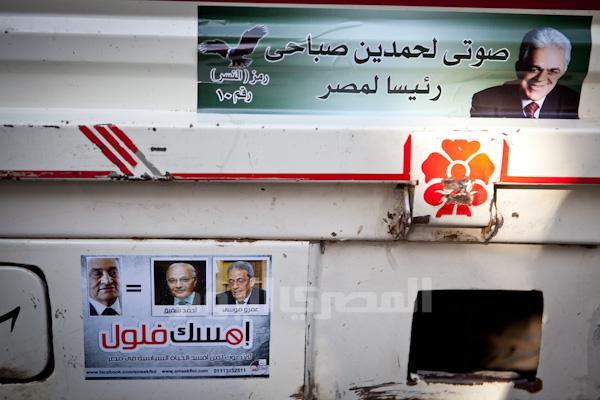 Back at headquarters the next day, Hania was still super active. She organized the microbus and the music for the truck, gathered the team and put posters on cars in order to leave as soon as possible. However, everything was not under her control and instead of leaving headquarters at 1 pm on Saturday, the convoy left for Helwan at 4 pm. 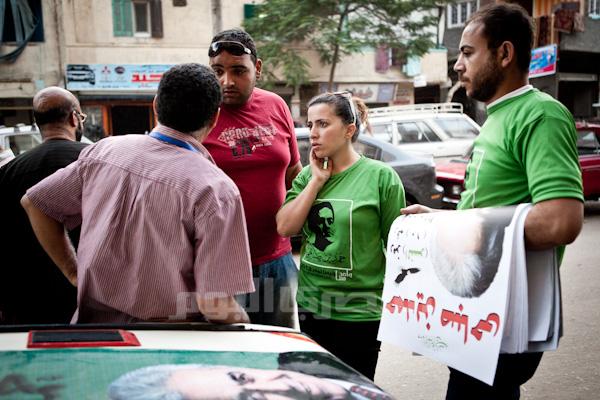 The bus stopped first in front of the Maspero building to meet another car and put Sabbahi’s posters on it. Then it was time to pick up other campaigners, refuel the cars, and fix the sound for the music on the lead car. Hania and her team arrived in Helwan to meet other volunteers around 6 pm and started distributing flyers in the streets.

They eventually reached another part of Helwan and began to distribute fliers in shops and houses. “After distributing the fliers door by door, other campaigners from Helwan will join us and walk beside the cars to distribute posters. After that, we will go somewhere to watch a documentary about Sabbahi,” she explained. 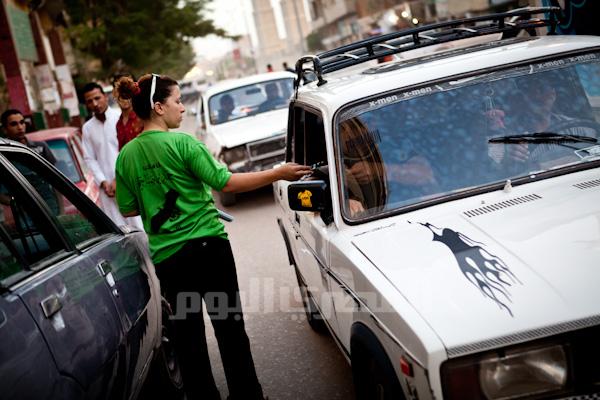 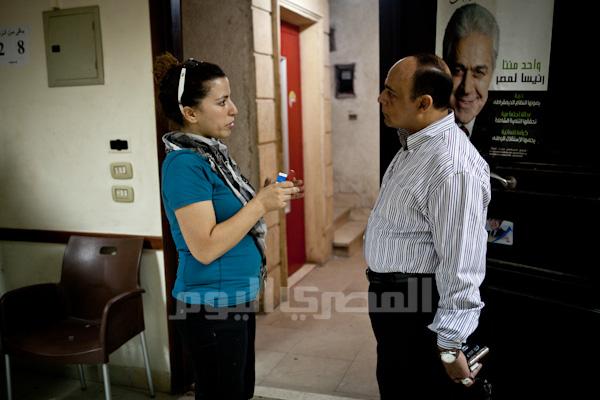 After a short stop to get some food, the campaigners continued their walk and ride around Helwan, singing, “My vote is for Hamdeen Sabbahi” as background music. The evening was long, ending with the projection of a 30-minute documentary about Sabbahi before returning to headquarters. On Sunday, Hania and the team would go on a tour again, the final event until the beginning of the election on Wednesday.

Although Hania has never had the chance to talk to Sabbahi, she believes that he will change Egypt in the way that she and her compatriots for the April 6 Movement are hoping for. 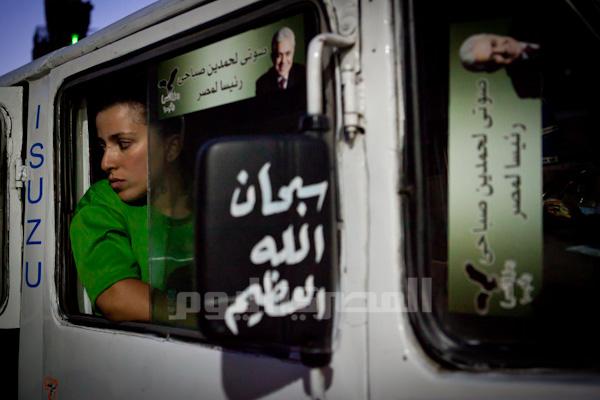 The ultimate necessity of presidential candidates