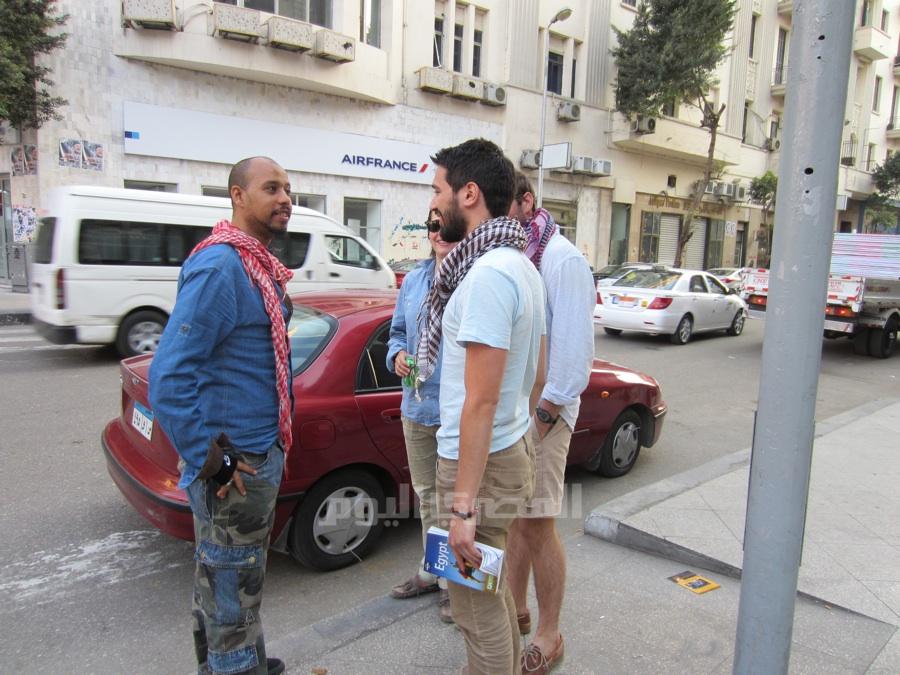 Egypt is a massive living organism — a web of ticking clocks, each set to a slightly different millisecond. With approximately 80 million in the country, 18 million of whom are woven into the streets and buildings of Cairo, the traffic of the city may crawl but many would say it is only by the will of God that it continues to flow at all. People are everywhere — driving, jumping off buses, walking, bicycling… ticking minute by minute through the days and nights of the city. Doctors, valets, belly dancers and beggars… Cairo keeps 18 million cogs in one of the world’s busiest wheels. This series takes a magnifying glass to one person, a representative of a job that keeps the city ticking — an eye-level shot that takes you through a day in the life of a cog in the wheel of Cairo.


As he enters Tahrir Square from the north, Tiger spots two young women standing near Tahrir Table, a new Swedish restaurant that’s opened on the northeast side of the square. Easy to pick out from their blonde hair, he suspects they are American. When Tiger introduces himself, the women stare at the ground and don’t acknowledge him. He asks where they are from, and one responds that she doesn’t know.

After a few more attempts, he becomes frustrated. “Why are you sad?” he teasingly asks. He shouts at them to take his email address, which contains the words “top-secret” and “baby.”

“It’s baby with an ‘i,’” Tiger explains as he walks away. “I like to tell girls my email. Girls, they like that sense of humor.”

Tiger speculates as to why he was rejected. “Maybe they woke up early. I put myself in their situation. If you continue, you will be rude; my religion says not to be rude.”

Yet Tiger knows the women don’t talk to him for the same reason as nearly every other foreigner he approaches: His line of work has a bad reputation. Many would call someone like Tiger a trickster, a hustler, a shill or a scam artist. But judging by Tiger’s typical workday, he can be more accurately described as a freelance tour guide.

Interactions like the one in Tahrir are part of Tiger’s daily routine. He begins around noon in front of Groppi, the famous cafe facing Talaat Harb Square, the central hub for tourists staying in downtown Cairo. Throughout the day, Tiger will scour the square and its environs, seeking out foreign tourists and trying to convince them to go on a trip with him as their guide. This is his best way to make money. If the tourists don’t want a trip, he will offer to bring them to a nearby hotel or perfume shop, from which he’ll take a commission.

This morning, Tiger is leaning back against one of the pillars in front of Groppi, drinking a coffee and reading a newspaper.

“This is my office,” he says, his eyes expanding with his large smile.

Ready to begin his day, Tiger talks about his role as a leader and the importance of his work.

“My spirit is like this,” he says, making a heart with his index fingers and thumbs. “Inside this heart is the whole world. From my visions I believe Egypt and America have to lead the world.”

These visions, Tiger says, help him live a “happy life.” He sees them when he is sleeping, but insists they are not dreams. To give an example, he mentions a past vision which revealed to him “the secret of the whole world.” But despite persistent questioning, he won’t reveal the secret, as he says it’s too difficult for others to understand.

Joined by his cousin and partner, Wael, Tiger begins his morning round of the square. (Both ask that their full names not be used for this article, as they worry it could negatively affect their work.) It quickly becomes clear that he is not the only freelance tour guide there. His greetings with the others are friendly, but they are competitors over a relatively small, barren territory.

These freelancers all speak good English, and like Tiger, are constantly on the alert for new business. Once one has begun a dialogue with a tourist, that tourist is by unspoken agreement now off-limits to the others.

Later in the night, Tiger approaches an older woman to offer his help, accidentally failing to notice that another freelance tour guide is already assisting her. The man screams at him.

Even if Tiger, or any other freelancer, begins a dialogue with a tourist, he is far from guaranteed to make any money. He needs to spend time with the person, establish some element of trust and finally convince the tourist to spend. If he doesn’t choose his mark wisely, he could invest hours and come away with nothing.

“I can look at a tourist from far away, and when my eyes catch him I decide if he’s a good customer,” Tiger says. “I see colors and then know if I should go.”

These colors form a kind of aura around a potential customer that only Tiger can see. But there are too few tourists in Cairo nowadays for Tiger to exclusively rely on these “colors,” no matter how reliable he may say they are.

He relies on a variety of strategies to catch attention of tourists as they walk by: waving at them from across the street, asking where they are from, attempting to speak in their home language (with Spanish, this produces disastrous results), and sometimes even complimenting their attire. In one instance, after complimenting a young woman’s green pants, Tiger turns pensive.

By the time Tiger and Wael run into Hiroaki Sato, a Japanese tourist, it’s around four in the afternoon. Hiro, as he goes by, is more promising, if only because he responds when they introduce themselves.

“I have two Egyptian-Japanese cousins,” Tiger tells Hiro. He explains that his name on Mixi, a Japanese social network, is “Yakouda.” (How did he get the name Tiger, by the way? “From the zoo,” Wael explains. Tiger returns: “Because when I wear a hat, I look like Tiger Woods.”)

Tiger convinces Hiro to sit down at an ahwa, where he slowly unfolds his pitch. He tells Hiro they can go to the Giza Pyramids to see a beautiful sunset. The trip will cost LE300. Neither Hiro nor Tiger’s English is fluent, so the conversation is stilted. As Tiger throws out a number of ideas, Hiro chews and nods occasionally. After making his final pitch for the pyramids, Tiger emphasizes: “It’s up to you, you don’t have to go.”

Hiro pauses for nearly half a minute.

“Well,” he says, adding another pause. “I think I really should go, but today, I won’t go.”

Tiger now must shift into Plan B — convincing Hiro to buy something at one of the perfume shops that are ubiquitous in downtown. Tiger almost exclusively brings his customers to Scarabe, a papyrus and perfume shop near the square.

Paintings of ancient kings, queens, the temples at Abu Simbel and other pharaonic images cover the walls of the shop. The prices range between LE120 and LE360. One painting, titled “The Hieroglyphic Alphabet,” has Arabic letters instead.

Mohamed Bola, an employee of the shop and a friend of Tiger’s, knows many potential buyers will suspect his paintings, which he says are original works on authentic papyrus, are fake. He prepares for this by demonstrating how he personally makes the papyrus paper and holding the paintings under a light in the dark until they glow, which he says proves the material is genuine, not the banana leaves used by some sellers. A plaque on the wall reads “Ministry of Tourism,” which Bola points to as further proof of his shop’s legitimacy.

But Hiro doesn’t really want anything. When he throws up his hands and declares he is leaving, Tiger intervenes. After minutes of haggling, the three eventually settle on LE130 for two paintings.

“I have too many posters now,” Hiro murmurs as he exits the shop with the rolled-up papyruses and walks back to his hotel.

“He's a good guy, but in our business he’s a little bit rough,” Tiger says of Hiro afterward. “His personality is not very friendly. He probably walked with us because you [this journalist] are a foreigner.”

Tiger and Wael emphasize that they would not have asked Hiro for money had he not bought the papyruses.

“Whether they buy or don’t buy, we are always showing our kindliness,” Tiger says.

Tiger and Wael split a 50 percent commission with Bola, so each nets LE32.50 for about two hours of work. For the rest of the day, they won’t make any more money.

After early evening prayers have concluded, Tiger unveils what he says will be his last vision for today.

Wael is not as positive. When Tiger first introduced his cousin, he said Wael had been a heavy drinker with a bad reputation in the neighborhood. Wael had said nothing at the time.

“To be in the street all day is not a good job,” Wael says later, while Tiger is in prayer.

Wael says he used to use heroin regularly about three years ago, but willed himself to stop. More recently, he says, religion has helped him escape from drugs and drinking. However, he says he still smokes hash after dusk prayers.

“Tourists are not polite,” Wael says when asked how he feels about the daily rejection. His interactions with them are awkward, as he has only recently begun working with Tiger. “Some people don’t answer at all. Some people just go away,” he adds.

Tiger says tourists feel safer when they book ahead, rather than simply finding someone on the street. “Hotels tell them to be careful from the street; don’t talk to people,” he claims.

At one point earlier in the day, Tiger tells Hiro that the Cairo Inn Hotel, which overlooks Talaat Harb, is “my business.” (He later admits this is misleading, though he continues to say it.) But he never hides the fact that he is trying to provide a service and that it will cost money.

“Some people say we hustle them or rip them off,” Tiger says. “We offer them possibilities and then they can decide.”

By 8 pm they have all but called it a night.

A week and a half later, Tiger says he and Wael are freelancers no more. Wael has begun working at a cafeteria, and Tiger has taken a position at the Cairo Downtown Hotel, which takes up the fourth floor of a cavernous downtown building near Tahrir Square.

Things certainly seem to be looking up for Tiger. He says he’s recently received replies to emails he sent to Barack Obama, Vice President Joe Biden and First Lady Michelle Obama. After a few minutes of searching his archive, he finds the subject line of a message from “Barack Obama,” amid a mailbox full of emails from the Obama reelection campaign. He won’t open the email, though, insisting that its contents are strictly between him and the president.

While Tiger appears content in his new job, he says he is not completely done working on the street. Although he won’t reveal what it is, he says he has one more important thing to do for his country.

“Did you forget?” he asks. He’s squinting through another finger-and-thumb heart.

A week after that, Tiger quits his hotel job. He is back on the street.