You know what they say about children: they should be seen and not heard. It's the same for a referee or umpire who wants to be respected — do the job properly and you'll be anonymous, a surefire sign of success.
The same could probably be said of the people — almost exclusively men — who govern world sport. But their egos got in the way a long time ago, and we've spent the last year learning about their excesses and largesse.
Dozens of football's most influential figures have been named and shamed, arrested and extradited. FIFA is in a seemingly terminal crisis, with its president Sepp Blatter banished from the empire he created.
And the IAAF — the International Athletics Association Federation — isn't faring much better. Its former president Lamine Diack is under criminal investigation for bribery, while Russian athletes have been suspended over a "state-sponsored" doping program.
I love sport: I played a lot, and I've devoted my career to talking about it, but it's too easy to be cynical these days.
Who else is cheating, or at least bending the rules? How serious is match-fixing? Why is the 2022 World Cup going to be played in Qatar?
This year was the worst, and when ISIS extremists targeted two of the biggest soccer teams in the world game at the Stade de France in Paris last month, sport itself was under attack.
But in the days that followed, amid the shock and the grieving, sport emerged as a beacon of hope.
It was in that moment, when England and France's players stood shoulder to shoulder prior to a friendly match, when the partisan home fans at Wembley joined in to sing La Marseillaise, that sport showed us the way. It was defiant, it was united and it was beautiful. 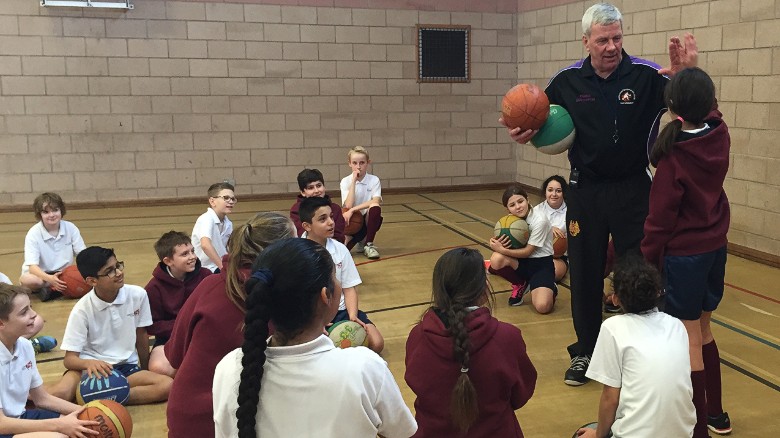 Basketball coach Bob Martin talks to children about the sport.
The power of sport might sound like a bit of a cliche — but if you can see past the million-dollar contracts, the selfish egos and the corrupt officials, you'll find an abundance of inspirational stories.
For example, take John Amaechi. The first Englishman to play in the NBA describes his teenage self-image, when he was growing up in north-west England, as that of "a monster."
He was a giant, he was black; amongst his community, he was very much an outsider. He had no interest in sport until he wandered into a basketball gym at the age of 17 and, in the blink of an eye, his life was transformed.
John and I worked on a special edition of World Sport, which airs for the first time on December 25, and he illustrated the numerous opportunities for sport to make a positive difference in the world.
He never forgot the people who helped him and the principles he learned, so much so that he turned down the chance to win multiple NBA titles on a 17-million dollar contract with the LA Lakers. Instead, he stayed with the Orlando Magic, the only team who'd shown an interest in him the previous season.
You might not become a celebrity by playing sport, but you can become a somebody. Stepping over the touchline or the boundary puts you into another world where race, religion and sexual preference become irrelevant.
In the wake of the Paris terror attacks, the Belgian football captain Vincent Kompany lamented the political failures in his hometown, Molenbeek, but recognized the value sport can have, saying: "You've got all the colors and all the cultures in one team — this is what I like about football." 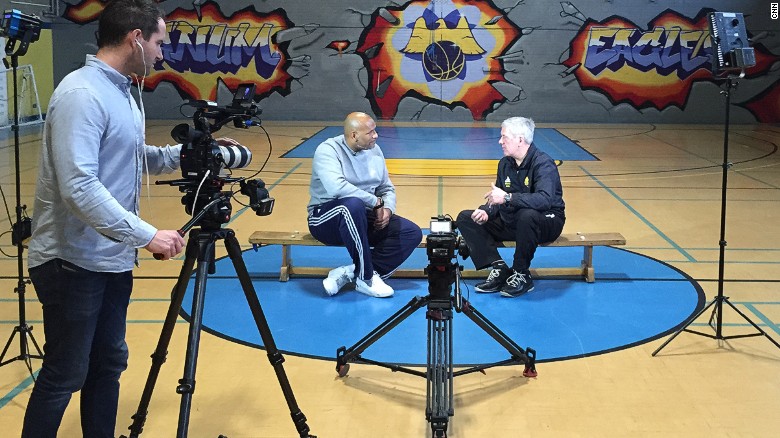 John Amaechi (left) and Bob Martin during filming of "The Power of Sport."
He added that the real world has to take heed, explaining: "You need to force people to get out of their comfort zone and meet each other, be together, and be on the same side."
The world of sport offers us all so many opportunities, but it needs to be protected. Amaechi argues that sport needs custodians, people who are prepared to mop up the spills every now and again and work to prevent any further accidents in the future.
He's not just talking about presidents — he's talking about all of us: starting, of course, from the very top, and moving down through the sponsors and the broadcasters to the players, the coaches and the fans. If we work together, we all have more power than we know.
Sport is worth saving, but it's up to us.