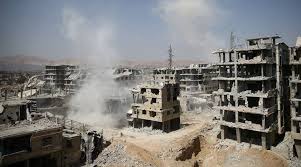 Syrian government forces pressed their offensive in the province of Hama on Friday in a weekslong attack aimed at clearing central Syria of Islamic State group fighters, opposition activists and state media said.

The violence came as a deal was announced in the Kazakh capital of Astana on de-escalation in the nearby, mostly rebel-held province of Idlib.

Syrian troops have been on the offensive against IS in central Syria for weeks under the cover of Russian airstrikes. In August, troops were able to besiege a wide area controlled by the extremists that has been shrinking ever since.

One of the main battles has been taking place near the central town of Okeirbat, which government forces captured in mid-August. Earlier this month, IS fighters regained control of the town only to lose it again on Thursday after a crushing attack that involved intense airstrikes, according to the Britain-based Syrian Observatory for Human Rights.

Okeirbat was the largest town IS held in the central province of Hama. The area is important because it is close to villages loyal to President Bashar Assad and earlier this week the extremists shelled the government stronghold of Salamiyeh that is home to members of the minority Ismaili sect, a branch of Shiite Islam.

By losing the central region, IS will be mostly left in the eastern province of Deir el-Zour as well as a third of the northern city of Raqqa, once the group’s de facto capital.

The Britain-based Syrian Observatory for Human Rights said the fighting is concentrated in the Okeirbat area. The Observatory said Friday that more than two weeks of fighting has left hundreds dead on both sides.

The government-controlled Syrian Central Military Media reported the clashes saying IS positions are being targeted with artillery and rockets.

IS said in a statement posted online that it repelled a government attack near the village of Sheikh Hilal, claiming to have killed 11 soldiers.

Mohammed Ibrahim Samra, governor of Deir el-Zour province, said the city has been completely liberated from IS. The Syrian army took the key heights around the area, he said.

IS positions are five kilometers (3 miles) from the city, the governor said. He added that basic services have been restored and a hospital re-opened.

Maj. Gen. Igor Konashenkov, Russian Defense Ministry spokesman, told reporters on a trip organized by the ministry that there are still IS fighters on the right bank of the Euphrates River. Most of them have fled to the left bank.

The developments in Syria came as the Turkish Foreign Ministry said that Turkey, Russia and Iran have announced the establishment of a “de-escalation” zone in Syria’s northern province of Idlib.

A ministry statement said Friday the decision was reached by the three countries’ delegations during a meeting in Kazakhstan’s capital Astana.

The ministry said observers from the three nations would be deployed at “control and observation” points within the boundaries of the zone.

The statement said: “The observer forces’ main task will be to prevent conflicts between the regime and the opposition and to monitor possible violations of the cease fire.”