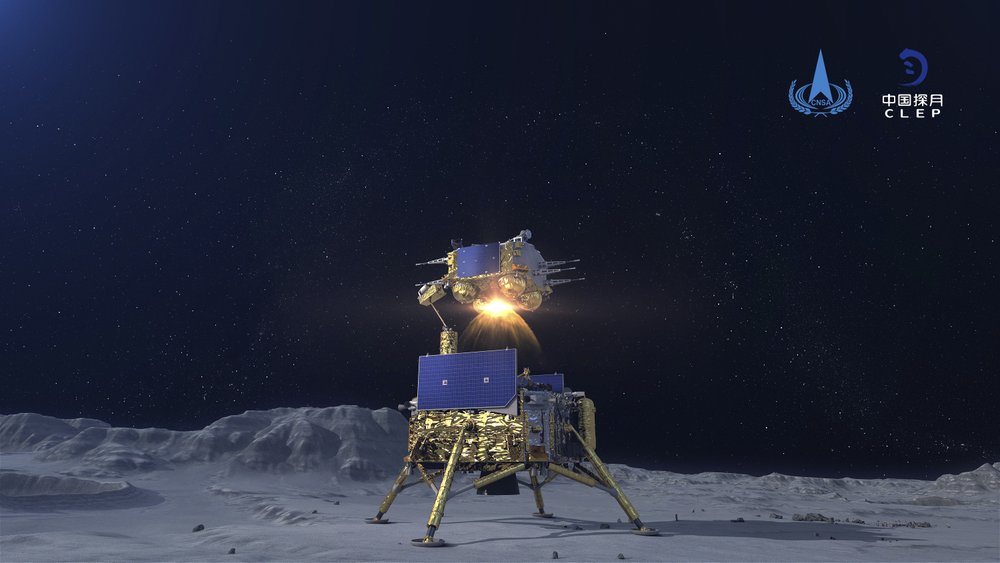 BEIJING (AP) — A Chinese probe was orbiting the moon on Monday in preparation for the returning of samples of the lunar surface to Earth for the first time in almost 45 years.

The ascent module of the Chang’e 5 spacecraft transferred a container with 2 kilograms (4.4 pounds) of samples after docking with the robot spacecraft on Sunday and was afterward cut free.

The orbiter and reentry vehicle will circle the moon for another week awaiting a narrow time window to make the roughly three-day, 383,000-kilometer (238,000-mile) journey back to Earth. It will first “bounce” off the Earth’s atmosphere to slow its speed before the reentry vehicle separates and floats down on parachutes to land on the vast steppes of Inner Mongolia, where China’s Shenzhou crewed spaceships have also made their landings.

If the mission succeeds, it will make China the third country after the United States and former Soviet Union to bring moon rocks to Earth. They will be the first fresh samples of the lunar surface obtained by scientists since the Soviet Union’s Luna 24 probe in 1976.

The Chang’e ascent stage blasted off from the moon’s surface on Friday, leaving behind the lander module flying the Chinese flag, according to the China National Space Agency, which also released a photo taken by the orbiter showing it approaching for its rendezvous with the ascender, a sliver of the Earth seen in the background.

That marked the first time China had succeeded in lifting off a spacecraft from a celestial body, while no country had previously achieved the tricky feat of executing a robotic docking in lunar orbit. Controllers on Earth had to deal with distance and time lag while precisely maneuvering a clamp into position with almost no room for error.

The 23-day mission has been front page news in state media for days, paired with reports that China has officially lifted all of its citizens out of the most grinding form of poverty. Along with being a propaganda coup for the ruling Communist Party, the dual stories illustrate the vast economic and technological advances China has made since it became just the third country in history to launch a person into space in 2003.

By way of cautious incremental steps, China is now in the midst of a series of ambitious missions that include a probe en route to Mars and the development of a reusable space plane about which little information has been provided.

The Chang’e lunar program, named after the ancient Chinese moon goddess, has also been operating the Chang’e 4 probe on the moon’s less explored far side for the past two years, while the Chang’e 3 rover launched seven years ago continues to send back data.

Future plans call for returning a human to the moon five decades after American astronauts, along with a possible permanent moon base, although no timeline has been offered. China is also building a permanent space station to begin operating as early as 2022.

US opposition has prevented China’s secretive, military-backed program from participating in the International Space Station, although the CNSA has been expanding its ties with other programs, including the European Space Agency, which has helped guide Chang’e 5 on its mission.

Chang’e 5 touched down Dec. 1 on the Sea of Storms on the moon’s near side close to a formation called the Mons Rumker, an area believed to have been the site of ancient volcanic activity.

The rocks and other debris were obtained both by drilling into the moon’s crust and by scooping directly off the surface. They are thought to possibly be billions of years younger than those brought back earlier and may offer insights into the moon’s history as well as that of other bodies in our solar system.

The lunar exploration program has set up dedicated labs to analyze the samples for age and composition. China is also expected to share some part of them with other countries, as was done with the hundreds of kilograms (pounds) of rocks, sand, dust and other samples obtained by the US and the former Soviet Union.

Image: In this China National Space Administration (CNSA) photo released by Xinhua News Agency, a simulated image of the ascender of Chang’e-5 spacecraft blasting off from the lunar surface at the Beijing Aerospace Control Center (BACC) in Beijing on Dec. 3, 2020. The Chinese lunar probe lifted off from the moon Thursday night with a cargo of lunar samples on the first stage of its return to Earth, state media reported. (China National Space Administration/Xinhua via AP)

China spacecraft lands on moon to bring rocks back to Earth

China prepping for mission to bring back material from moon

United Arab Emirates to launch spacecraft to moon in 2024