China on Sunday expanded drastic travel restrictions to contain a viral contagion that has killed 56 people and infected nearly 2,000, as the United States and France prepared to evacuate their citizens from a quarantined city at the outbreak’s epicenter.

China has locked down the hard-hit province of Hubei in the country’s center in an unprecedented operation affecting tens of millions of people to slow the spread of a respiratory illness that President Xi Jinping said posed a “grave” threat.

Outside the epicenter, three cities, including Beijing, and an eastern province announced bans on long-distance buses from entering or leaving their borders.

Originating in Hubei’s capital of Wuhan, the virus has spread throughout China and around the world, with cases confirmed in around a dozen countries as distant as France, Australia and the United States.

The State Department said on Sunday it was arranging a flight to repatriate staff at its Wuhan consulate and other American citizens trapped in the city.

The flight departs Wuhan on Tuesday for San Francisco, it said in an email to Americans in China, while warning of “extremely limited” capacity for private citizens.

France’s government and the French carmaker PSA — which has a sizable presence in Wuhan — also said they were formulating plans to evacuate staff and relatives, who would be taken to a city in a neighboring province for a quarantine period.

Sri Lanka said its Beijing embassy was considering action regarding its nationals in Wuhan.

China would normally be celebrating the Lunar New Year holiday this week, but Wuhan’s eerie quarantine calm deepened on Sunday as new restrictions banned most road traffic in the metropolis of 11 million.

“Do not believe in rumors. Do not spread rumors. If you feel unwell, go to the hospital in time,” the message said.

“Wuhan is a city that dares to face difficulties and keeps overcoming them,” the female voice added, mentioning the deadly 2002-03 SARS epidemic and 1998 Yangtze River flooding.

Israt Zahan, a Bangladeshi doctoral candidate living in Wuhan said she and other students were staying in their homes as it was “too risky” to go outside.

“The bustling city looks like a ghost town from my window. The shops are all shut down. I am rationing the food at my home. It will last for two days. Then I don’t know what I would do,” she told AFP by phone.

Despite anxious scenes at crowded hospitals in recent days, there were no signs of panic in the city.

But defenses were bolstered elsewhere in the country.

Beijing suspended long-distance bus services into and out of the capital beginning Sunday. Similar suspensions are planned for the entire eastern province of Shandong — home to 100 million people — plus the northern cities of Tianjin and Xi’an.

The southern city of Shantou had announced a ban on vehicles entering its jurisdiction after detecting two cases, but authorities later reversed the decision.

Overseas Chinese tour groups will be suspended from Monday while domestic trips have already been halted since Friday.

In the semi-autonomous southern city of Hong Kong, Disneyland announced Sunday it had closed as a precaution following the government’s declaration of an emergency to combat the crisis. Shanghai’s Disneyland park had already closed Saturday.

The nationwide death toll rose to 56 after 15 new deaths, most of them in Hubei.

Shanghai on Sunday reported its first death — an 88-year-old man who had pre-existing health problems.

It was the first death reported in an internationally connected major Chinese city outside of Wuhan, where the outbreak is believed to have originated in a market where animals like rats, snakes and hedgehogs were sold as food.

The government says most deaths involved the elderly or people already weakened by pre-existing health conditions.

Fearing a repeat of SARS, China has dramatically scaled back celebrations and travel associated with the New Year holiday, which began Friday, while tourist sites like Beijing’s Forbidden City and a section of the Great Wall have closed as a precaution.

Xi said at a Communist Party leadership meeting on the crisis that China was “faced with the grave situation of an accelerating spread” of the virus, calling for stepped-up prevention.

Measures have been ordered nationwide to detect and isolate people carrying the virus on planes, trains and buses.

In Wuhan, China’s military has dispatched 450 medics, many with experience combating infectious diseases, to help treat patients in the city, many of whom reported hours-long waits at overwhelmed hospitals.

Wuhan is racing to build two makeshift virus-focused field hospitals within a fortnight to ease the pressure. The first could be ready in just over a week.

Image: AFP / Hector RETAMAL The Chinese military has deployed hundreds of medics to Wuhan, the epicenter of the viral outbreak 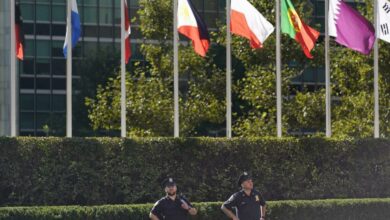 World leaders return to UN and face many escalating crises