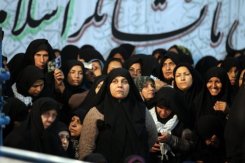 Iran is a very urbanized society with a largely educated, young Muslim population that ranks as the Middle East's second-biggest, its latest census figures, published on Sunday, show.

The snapshot, issued on the website of the presidency's planning and strategic supervision department (www.amar.org.ir), also corrected some misconceptions about the country, notably by reporting fewer than expected Jews and Internet users.

The census, whose data was collected in 2011 and presented in resume last week by the department's officials, gave Iran's total population as 75.2 million, 99.4 percent of whom are Muslim.

That was larger than any other country in the region except for Egypt (81 million, according to the World Bank).

An overwhelming proportion of the population — 71 percent — lived in urban areas, and Tehran and its satellite towns are home to 12.2 million inhabitants.

The literacy rate for those aged between 10 and 49 was 93 percent.

Most of the population is young, with 55 percent aged under 30.

The proportion of young Iranians use to be even higher, but a rapidly slowing birth rate — an average 1.29 children per couple, compared to 1.62 in the last census in 2006 — has resulted in a decrease in recent years.

The supreme leader, Ayatollah Ali Khamenei, has recently sought to reverse a previous policy favoring birth control in a bid to boost the population to between 150 million and 200 million.

Even though Iran — a Shia theocracy — is almost completely Muslim, other faiths are present.

There are 8,756 Jews in the country, according to the census. That was fewer than the 20,000 figure previously estimated.

Education is an important value in Iran, as seen by a big jump in the number of people pursuing higher studies at university or in religious institutions (10.5 million, up from 6.9 million in 2006).

Men and women are split almost equally 50-50 in this category, underlining the growing number of educated Iranian women.

Iran has the biggest group of Internet users in the Middle East — although the figure of 11.2 million declaring themselves connected was far smaller than the estimate of 36 million advanced by the telecommunications ministry.