Social media videos geolocated to the Russian-occupied town of Popasna show that a base used by the Wagner military contractors was hit by artillery or rocket fire at the weekend.

The Wagner group of private military contractors has played an active role in the fighting in Donbas, often deployed as infantry to advance on towns from which Ukrainian forces have withdrawn. The paramilitary group is sponsored by Russia.

Serhiy Hayday, the Ukrainian official who is head of the Luhansk region military administration, said on his Telegram channel Monday that “the Armed Forces of Ukraine once more successfully worked on the enemy headquarters.”

“This time it was yesterday in Popasna, where the headquarters of PMC ‘Wagner’ was smashed with a well-aimed hit,” Hayday said.

“The number of dead is being clarified,” he added.

Over the weekend, pro-Russian Telegram accounts associated with the Wagner group showed extensive damage to a building in Popasna and said there had been casualties. 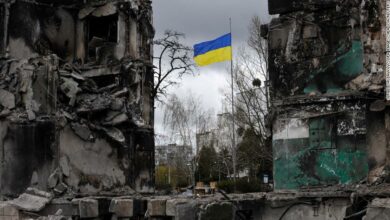 President Zelensky says 6,000 square kilometers of Ukraine liberated since the beginning of September