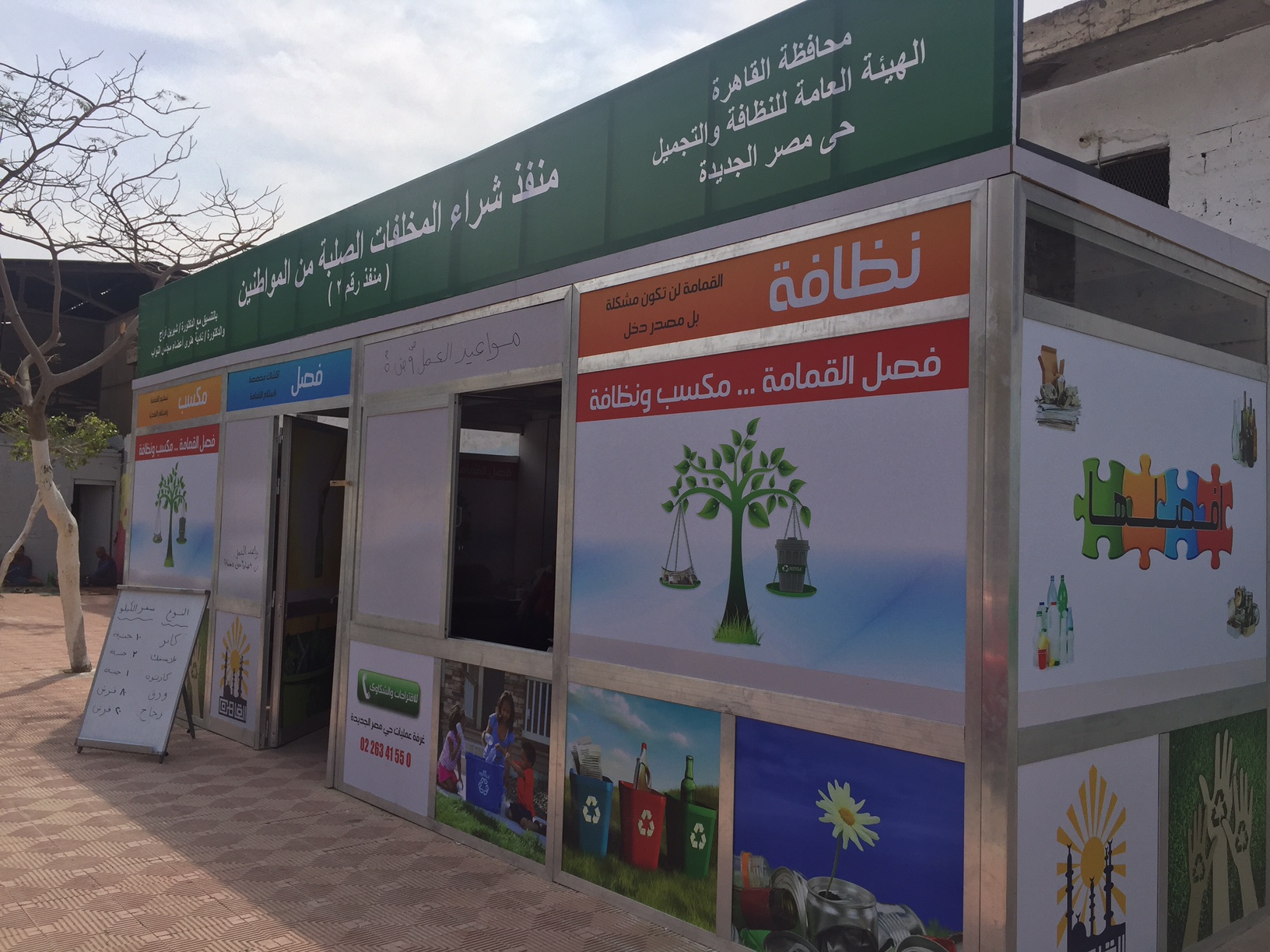 Cairenes now have the chance to earn some extra cash in exchange for selling their recyclable garbage to two state-owned kiosks around Heliopolis district.

In an effort from the state to encourage Cairo residents to keep streets clean and reduce the amount of trash produced in the city, the kiosks began buying cans, glass, paper, cardboard and plastic from the public last week.

Cairo governor Atef Abdel-Hameed said that, with this initiative’s implementation, he hopes to benefit people by purchasing their trash, leading in the long run to keeping the capital’s streets clean. 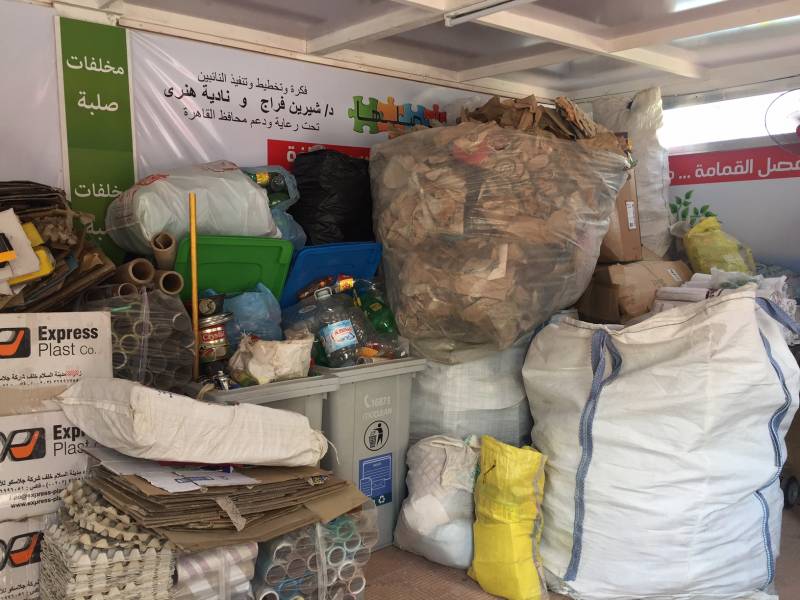 “We will encourage citizens to value garbage by sorting it at home and give them a chance to evaluate which trash should go to the kiosks for sale, to be reused,” Cairo governor said in a statement on March 7.

Since the launch of the initiative last week, the turnout has been an average of 200 people per day, per kiosk — with men, women, and even little kids coming in to sell their trash. Kiosk managers expect the numbers to increase to 500 per day over the next couple of months.

“Many kids are excited about the new initiative. They wait until after school and come along with their parents to sell cans and plastic in order to earn some extra cash,” said Ibrahim Hassan, who runs the kiosk on Aswan street.

Parliamentarians Nadia Henery and Sherine Farrag are leading the recycling initiative, under the supervision of Cairo governor Abdel-Hameed. They plan to evaluate the work of the kiosks over the coming months with the aim of installing similar kiosks across Cairo, as the initiative is currently narrowed down to Heliopolis.

“Our aim is to motivate people on the importance of recycling and to give them an opportunity to be responsible for the cleanliness of their own country,” Nadia Henery, Member of Parliament for Heliopolis neighborhood told Egypt Independent.

Prices for each recyclable item are posted on a white sign right in front of the kiosks. They buy empty aluminum cans for LE10 per kilogram, plastic for LE3 per kilogram, cardboards for LE1 per kilogram and paper and glass for LE0.80 and LE 0.20 per kilogram, respectively. 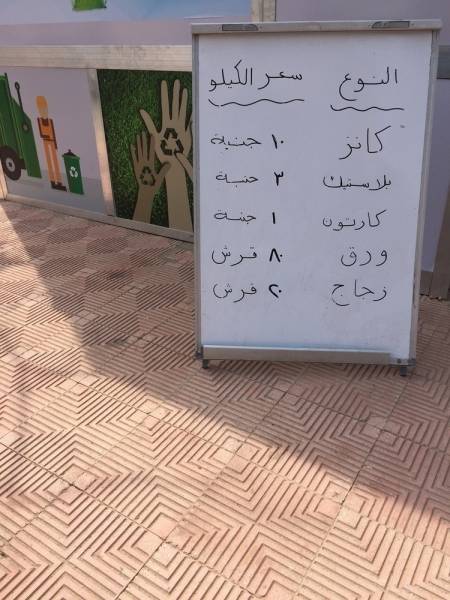 The kiosks then compress and sell the materials to the appropiate factories for reuse.

“The prices may seem low, but people need the extra money anyways. Imagine getting an extra LE30 or LE40 for a pile of trash that was going to be thrown away anyways, it’s encouraging,” said Ibrahim.

Ibrahim added that many households also came in and sold jars and glass containers that were accumulating for a long time without being put to use; now they were able to earn extra money out of them.

As Egypt’s inflation rate has soared over 30 percent after the country floated its currency last November, Mayar Mohamed sees this initiative as a great way to make some extra cash to provide for her family.

“The money is encouraging my kids, and even me, to collect plastics and cans around the house, so we can come and sell them later in the week,” 35-year old Mayar said.

Although authorities hope that later on people will continue recycling without the monetary incentive, Ibrahim believes that money is the main reason why people will upkeep the sorting and reuse. Yehia el-Rawy shares the same sentiments.

"The money factor is essential for such a project to continue in a country like Egypt. No doubt, some people’s main concern is the cleanliness of the streets and a healthy environment; but people wouldn’t be motivated to contribute to the project as they are now, if there were no money offered,” el-Rawy said, as he was given twenty pounds in exchange for some soft drink cans and empty shampoo bottles.

There have been various initiatives to encourage people to sort their garbage at home, but to no avail.

According to the World Bank, Cairo produces more than 15,000 tons of solid waste each day, with only 60 percent managed by the formal and informal sectors combined. The remaining 40 percent is left on the streets.

Due to the absent recycling culture and poor waste management strategies, Cairenes find children and adults snooping in trash bins, plucking out recyclables such as cans or plastic bottles, further adding to the street garbage hitch.

Asked whether this new initiative would lead to the Zabbaleen community going out of business, Ibrahim said “not at all.”

The Zabbaleen neighborhood is home to an independent community of around 6,000 people, from garbage collectors and recyclers, to sorters and traders, whose sole source of income is from working with waste.

“It’s not a loss to them whatsoever, they can still collect the garbage and come to us and we will purchase it from them. Their source of income is still the same. We are urging them to collaborate and work with us more, so this project can be even more successful, Ibrahim said.