In the heady days immediately following Mubarak’s ouster last winter, Amira Hanafi and her colleagues at the Artellewa art space, like many people in Egypt, were in a particularly idealistic mood. In that rose-tinted moment, they began thinking about a project that would bring together artists from across the revolting Arab world to collaborate and connect with one another through art.

Many things have happened between now and then, but the Arab Collaboration Project finally kicked off in March, a year after its inception, and the exhibition that emerged from the project, “Carry On,” is currently on view at Artellewa. “Carry On” features the work of six artists from across the Arab world, who worked side by side for ten weeks, engaging in discussions and creating art in close proximity with one another. It is an exhibition more ambitious in scale than the typical micro-shows that take place in the space’s street-level storefront, filling not only the small storefront gallery, but also a second garage space and a fourth floor apartment, extending to a banner on the street. Coming as it does out of a collaborative process, it is notable that each artist essentially commands his or her own separate space.

Part of the initial idea for the group residency was that the artists would directly collaborate, but as Hanafi, the project manager found, such a process is difficult to impose and initiate as an institution. And more than instigating projects created through collaboration, Hanafi hoped the project would forge connections between cultural operators throughout the region, and facilitate collaboration in a broader, more systemic sense.

“I think the art world in general in the Arab world is not always so focused on itself, it is focused on a global art market. That was another objective of the project, to try to build a network of artists,” says Hanafi.

And this is perhaps where the project had its lasting impact.

Hanafi continues, “In the end the most valuable thing that happened was that those six people lived together for ten weeks, and there was a lot of tension in the group, and I think we all learned quite a lot from the project.”

Although the exhibition may loom large in terms of size, it is in certain ways only a by-product of what occurred over the ten weeks of the group residency. This is important to remember, because the exhibition itself is somewhat disappointing. Some works are directly political to the point of becoming didactic, and others take the street and immediate surroundings as a subject in a way that is at this point predictable in the context of an artist residency in Cairo.

Palestinian artist Ibrahim Jawabreh describes his work “Storage,” a collection of photographs exhibited next to his film, “The Revolution is not a Slogan,” as “an artwork that stores cadavers of those who have been killed in the Arab revolutions, to reuse them in the next revolution.”

This idea itself is already so clear in words, that it would be difficult to represent it in an interesting way visually. Jawabreh’s tight, black and white photographs of bodies are a familiar visual trope unconnected to the idea of revolution. But the artist also includes an image of alarm clocks, which will presumably wake up the contorted limbs when the time for the next revolution comes. The result is an obvious, yet simultaneously incoherent combination of symbols. In both the series of photographs and in his film, Jawabreh’s clear interest in direct political engagement means that he relies heavily on symbolic imagery that is unsubtle, and at the same time confused.

Egyptian writer and blogger Ahmed Zidan’s collaboration with Lebanese artist and curator Rola Khayyat in the sound and image installation “13 A.M.” is well executed and works well formally, but takes as its subject the neighborhood itself in a quite straightforward way, simply recreating Ard al-Lewa within Artellewa.

Khayyat and Zidan capture the blurring of public and private space that occurs in Ard al-Lewa and other informal Cairo neighborhoods in photographs that are lively and full of color, reflecting the cacophonous tableau of the neighborhood. This cacophony is magnified by an accompanying sound piece of clattering street noise.

But whereas Yara Mekawei’s sound piece from a previous Artellewa exhibition, “Shubra Line,” mixed the clash and chatter of the metro with the sounds of the surrounding street, creating an intriguingly harmonious dissonance of sound and place, this work simply recreates a space in its own space. 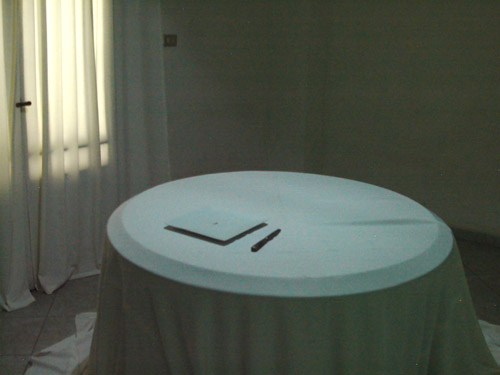 Less expected was Syrian artist Iman Hasbani’s installation “On the Table,” in which Hasbani arranged a table covered in a white tablecloth in a white room in the fourth floor apartment of the Artellewa building. On the table, she placed one butter knife and a white plate stained with a drop of something dry, crusty and reddish-brown. The scene is lit with a flashing strobe, creating a space that is mundane yet supremely uncomfortable, and peaceful, but with a heavy implication of pain. It is provocative, but abstractly so, implying the soft encroachment of violence on even the most pristine and quiet space.

Other works include Yemeni photographer Jameel Subay’s unfortunately forgettable photo-montage images of people and the street, and a simple but poetic banner hung across the street by Aliaa al-Gready, an artist based in Alexandria who is also the artistic consultant for the Gudran Association for Art in Development.

Despite distinct moments of beauty and provocation, the works in this exhibition do not together present any new idea of what Arab art is, or what happens when Arab artists join together to collaborate — nor does it question the premise of such designations. But it should be noted that some of the participants actually do not consider themselves visual artists, and were positioned as a part of the collaboration more generally as culture producers, thinkers or organizers.

“I think the exhibition as it is now sort of traces of what was left behind at the end of the project, and not so much a representation of what we spent ten weeks doing,” says Hanafi.

These traces, in the end, may be less interesting than the conversations that they emerged from, and less consequential than the relationships that were forged in the process of their making.

“Carry On” is on display at Artellewa until 26 June. 10 Mohamed Ali al-Eseary St., Ard al-Lewa, Giza

An end to neo-Islamism in the Middle East?