The day begins before dawn for most camels. In fact, many of them barely sleep. The journey from Daraw camel market in Aswan is long and bumpy. Camel elbows and camel knees tangled in the truck beds jab into camel bellies and camel sides.

Some camels cannot bear the journey, and are so ill by the time they arrive at the Birqash camel market 35 km northwest of Cairo that their day ends before the sun rises, and they are slaughtered. Their carcasses are left to the flies, a sobering reminder for the rest of the camels of the “survival of the fittest.” Survival that is, until they meet their own inevitable end. 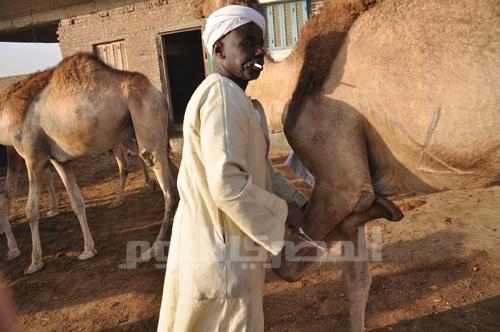 A male camel can weigh about 400 kg, and the meat sells at about LE45 per kilogram, a price cheaper than beef. The preferred cuts of meat are the brisket, ribs and loins, though the fatty hump is considered a delicacy.

Elizabeth Shoghi, a Swedish chef and nutritionist working as a consultant in Egypt, says, “Camel tastes of wilderness. The flavor is very robust, it dominates everything else on the dish.” Shoghi recommends camel carpaccio with some red wine or a balsamic reduction served with arugula.

Butchers selling camel meat are not found everywhere in Cairo. Even just outside the Birqash camel market, the butcher was only selling beef. However, many of the camel butchers are located in Imbaba where the old camel market used to be, until its relocation to Birqash in 1995. 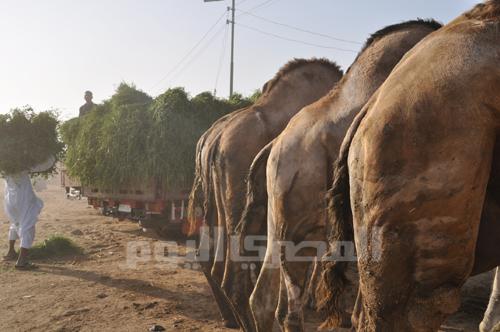 But this is the end of a camel’s da, let’s return to the camel market.

The camel-laden trucks rumble into Birqash kicking up clouds of dust. The camels are unloaded and each camel trader takes care of his camels as he sees fit. The lucky camels are kept in walled courtyards and are free to roam about. The not-so-lucky camels have their legs tied at the knees to keep them from wandering.

This method only impedes them slightly, because the camels have mastered the art of galloping on three legs. From time to time, a group of camels bolt off from their herd in an awkward three-legged gallop-hop with one or more young camel traders running after them, brandishing sticks.

One group of camels is serenely eating alfalfa out of an old metal bathtub. Hajj Marbrouk, their congenial Nubian trader, explained why they were not tied up. “They are happy because they are eating, and these are Somali and Sudanese camels, they are much quieter.” 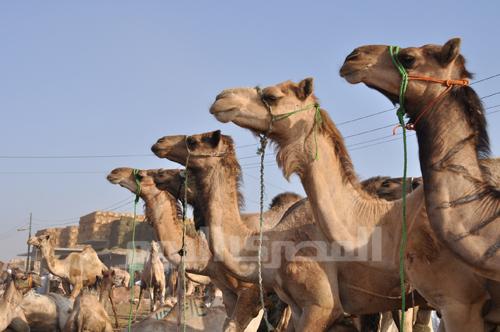 Indeed, the difference between the Somali and Sudanese camels and the Egyptian camels is evident immediately. The Egyptian camels are much larger and taller, and their humps are more defined with a small tuft of fur on the top.

The Somali and Sudanese camels have to walk 40 days through the desert from their breeding and grazing grounds in Somalia and northern Sudan to reach the Daraw camel market in Aswan. Camel traders like Hajj Mabrouk buy the camels in Daraw and bring them by truck to Birqash, a journey that takes one day and one night.

The camels are given alfalfa and peanut stalks to munch on while they wait for customers to arrive. As the sun rises, the butchers fill the market. There is not a man in sight who is not wearing a galabeya. 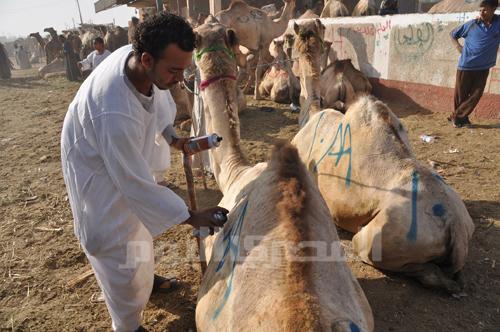 The butchers stand in a large throng and the camels are paraded out in front of them. One camel is brought out at a time. The traders surround the camel and brandish sticks at it, beating it from every direction in order to keep it in place long enough for the butchers to get a good look. The camel protests loudly by yelling and prancing about. Sometimes the camel will fall to the ground and refuse to get up. When this happens, the traders resort to beating it more in order to get it up.

It all seems like great sport for the traders. At one location, the traders chant and sing as they wave their sticks. Their faces glow with the good humor of a man who is doing business. The butchers look bored and unimpressed. They have their poker faces on, ready to haggle prices with the camel traders.

As for the camels, they look confused and frantic. Finally, when a camel is chosen or the butchers have seen enough, one decisive blow is administered on the camel’s backside and it is allowed to gallop off, out of the crowd of onlookers. 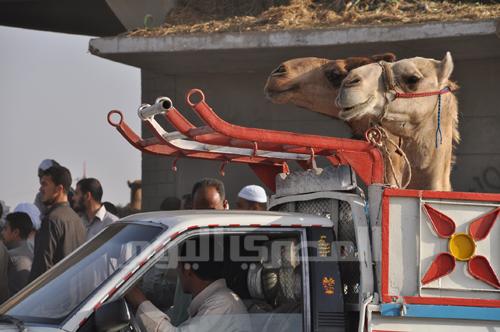 When a camel is chosen, some haggling and bargaining ensues. Occasionally this will get quite passionate, while the camel sits quietly by, for once getting a rest from the drama. This time, the camel is the one with the unimpressed look on its face. Once the sale is made, the camel is spray painted with the initials of the buyer’s name to seal the deal.

All sales are either made in cash or on credit. If the buyer is a butcher, he has eight days to slaughter the camel, sell the meat and return to Birqash with the money. Camel traders receive cash on the day they sell their camels. A small 8-year-old camel sells for about LE5,000, a large camel for about LE11,000.

Once the camels are sold, they are loaded back into trucks to be taken to their final destinations for the day, and for life. 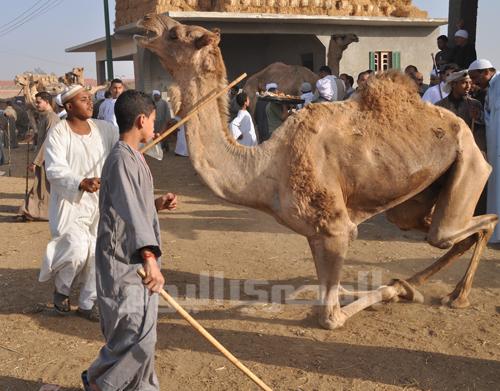 The loading process is quite arduous for everyone involved. The camels have to be loaded into pickup trucks. Getting a long-legged animal to hop onto the bed of a pickup is not quite as easy as it sounds. Some animals are dragged, some are pushed, some are pulled and some are lifted. All of this happens while the camel protests with loud groans.

But once the camels are successfully tucked into the bed of the pickup truck, they sit quietly, and only have to endure one last journey. The rest of the time in the camel’s day will be spent standing around because of inevitable delays, trying to escape, breathing in dust, and stuck in traffic, all of these, familiar activities that fill our human days in Cairo. 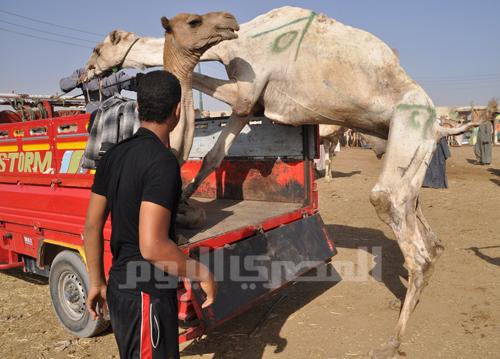