Hundreds of Cairo University students and professors protested on Sunday to call for the dismissal of university administrators and college deans, saying that the National Democratic Party (NDP) policies which they implement curtail campus freedoms.

Dozens of students and faculty members rallied before Faculty of Mass Communication, holding up banners against Dean Sami Abdel Aziz, an NDP member, who had criticized the 25 January revolution.

Protesters shouted slogans such as “Down with the dean!”

Students also marched before the Faculty of Science on Sunday against their dean and demanding the sacking of the university's president.

Protesters said Dean Mohamed Saleh referred a number of assistant teachers for investigation because they challenged his policies.

Moreover, hundreds of students protested before the university administrative building calling for president's dismissal. They also condemned state security personnel presence on the campus despite declarations that police and state security elements had been removed.

A number of physical therapy students and faculty members, meanwhile, said they will not attend or give lectures until the dean is dismissed, asserting that he had said he would resign but has not. 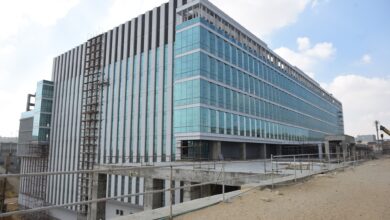