Far below the gridlocked streets of Egypt's capital, a virtual second city thrives.

The Cairo Metro system sprawls across the city, delivering an estimated 3.6 million passengers per day over three different lines and approximately 78 kilometers (49 miles) of train track, both above ground and below the city center. 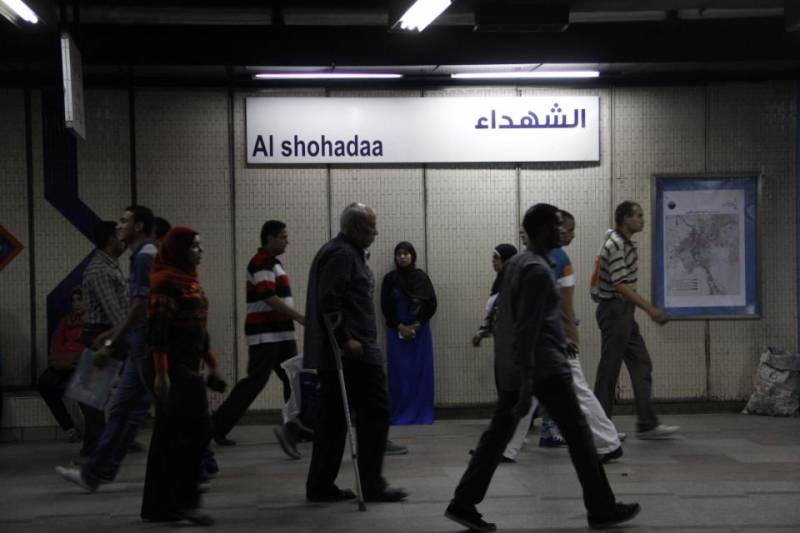 In this Sept. 13, 2014 photo, Egyptians make their way at the Shohadaa (Martrys) metro station, in Cairo, Egypt. Before the 2011 Egyptian revolution the station was named for former President Hosni Mubarak. In a city known, as much as anything, for its dysfunction, the Cairo Metro stands as a singular achievement. It’s reliable, well-maintained and relatively clean.

In a city known, as much as anything, for its dysfunction, the Cairo Metro stands as a singular achievement. It's reliable, well-maintained and relatively clean. And it may be the only place in Egypt where no-smoking rules are actually enforced. At 1 Egyptian pound (13 cents) per ticket, the Metro is a bargain even in a country like Egypt where nearly half the population of 90 million lives near or below the poverty line.

"It's like the life train," said Leila Abdel Basset, a 24-year-old journalist who has taken the Metro to work every weekday for the past three years. "It's crowded in some stations, and empty in others, but it always gets me to my station."

Veteran Metro riders know all the tricks and unwritten rules. For starters, men have to be careful not to accidentally step onto one of the women-only cars; those who forget could receive a hostile reaction from the women onboard.

Savvy passengers know to avoid the morning and evening rush hours, when the cars can become packed to maximum density with commuting civil servants and rowdy students. Others carefully choose their cars to avoid those that stop closest to the station turnstiles and are likely to be the most crowded. 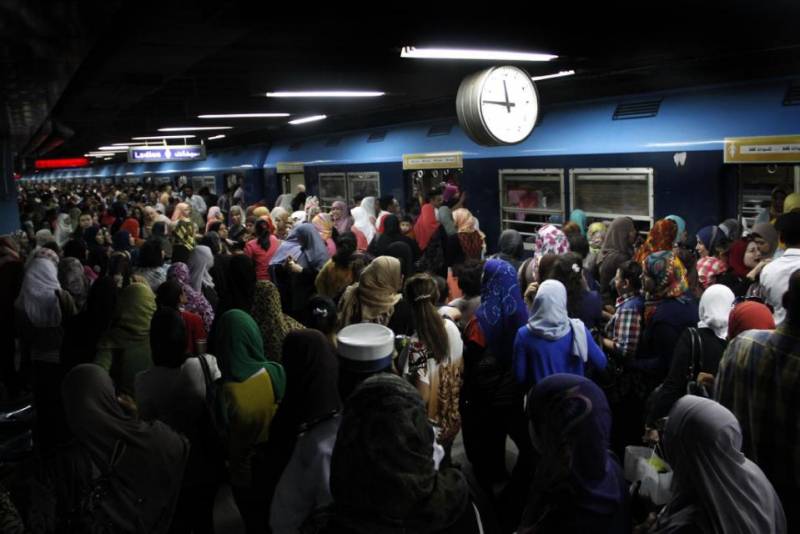 In this Sept. 13, 2014 photo, Egyptian women board a car at the Shohadaa, (Martyrs) metro station in Cairo, Egypt.

But not everything runs smoothly down below. The cars are not air-conditioned, which can make conditions truly miserable on a crowded summer day. At peak times, each station can devolve into a violent wrestling match, with passengers aggressively crowding in from the platform and preventing riders from exiting.

But at the same time, a sense of community also exists. Riders commonly and freely give up their seats to elderly passengers or women with children. During Ramadan, the holy month when observant Muslims abstain from all food and drink from dawn to dusk, volunteers pass out cups of water on the train cars at sunset. 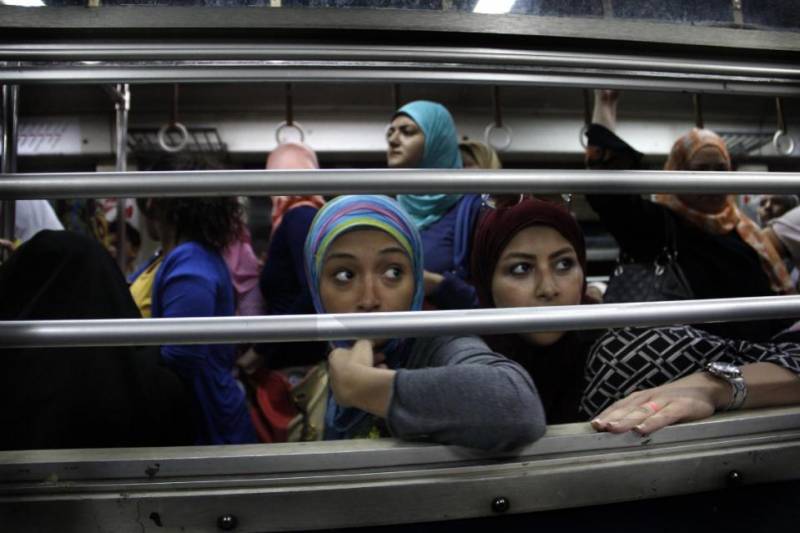 In this Sept. 13, 2014 photo, Egyptian women look from an all-female car at the Shohadaa (Martyrs) metro station in Cairo, Egypt.

The dependability of the Metro became crucial during the 2011 uprising that ousted Hosni Mubarak from power. The massive Sadat station extends underneath Tahrir Square — the heart of the revolution and the site of dozens of protests and violent clashes in the years since. Even when the streets surrounding Tahrir were blocked by cement walls and barbed wire, and tear gas from the clashes above filled the platform, the Metro still ran.

"The Metro was the tunnel to the revolution, it was the best transportation," said daily rider Lobna Tarek, a 26-year-old photographer. 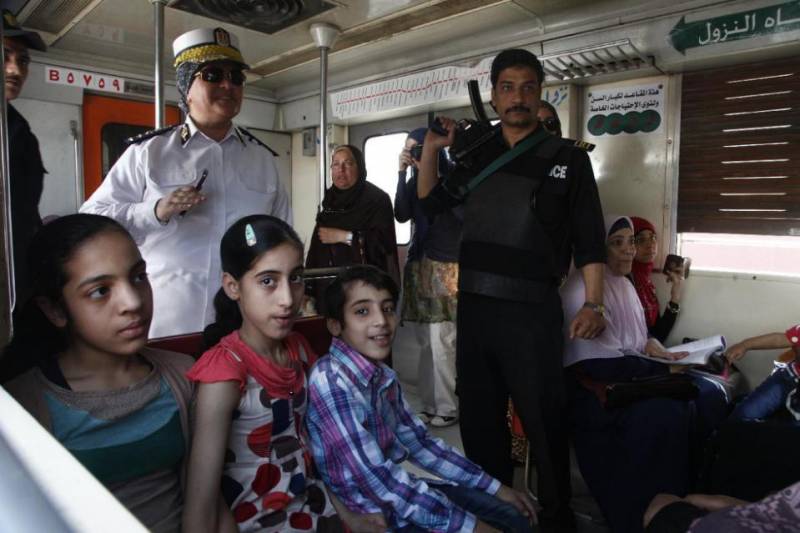 In this May 2, 2015 photo, Police Col. Nagwa Darwish addresses riders on one of the female-only cars on the Cairo Metro, at the New El Marg station in Cairo, Egypt.

But the Metro's immunity to Egyptian politics ended following the army's July 2013 ouster of Islamist President Mohammed Morsi after massive protests against his rule. In August 2013, when authorities violently cleared out a pair of public sit-ins by Morsi supporters, Sadat station was closed and hasn't re-opened since. Tahrir was a major hub for passengers switching between lines — most of whom have now had an extra 40 minutes added to their daily commutes

Since Morsi's ouster, a simmering insurgency launched partially by his loyalists has occasionally targeted Metro stations. The insurgents, so far, have used stun grenades designed to sow panic without causing serious casualties.

But despite everything, the trains keep running. 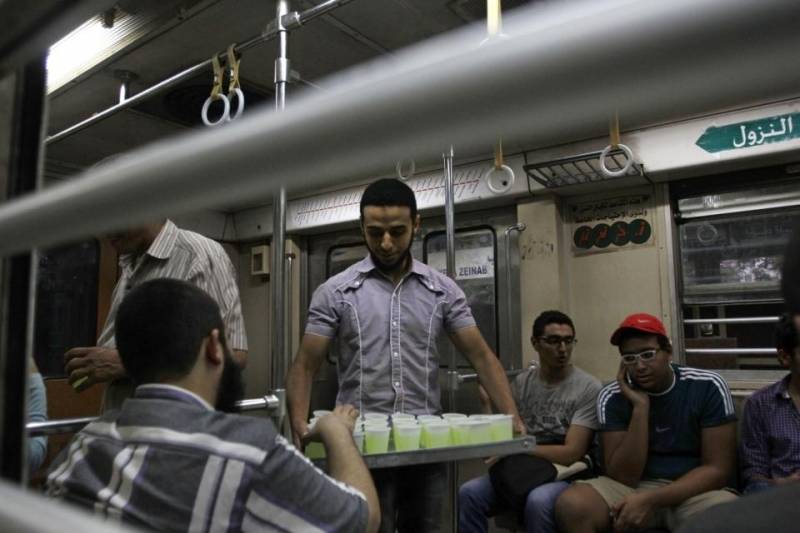 In this July 17, 2014 photo, a man distributes drinks to passengers to break their fast during the holy month of Ramadan, when observant Muslims abstain from all food and drink from dawn to dusk, at the Sayeda Zeinab metro station in Cairo, Egypt.
Tags
Cairo subway thrives beneath the chaos