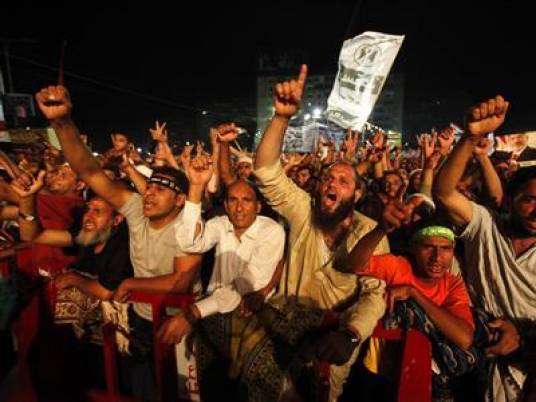 Minister of Transitional Justice and National Reconciliation Mohamed Amin al-Mahdy told Egypt Independent on Monday that Islamist forces, particularly the Muslim Brotherhood, are not abiding by the rules of democracy for a fruitful dialogue to be held, leading to genuine reconciliation.
“The Brotherhood raises arms not the banner of wisdom,” Mahdy said, denouncing the group for inciting bloodshed. “Even if it is not using arms directly, it incites the use of them.”
“They do not belong to this nation because they do not acknowledge the will of the people,” he said. “That will is going to triumph in the end.”
In a conference titled “The Track of the Constitution” at the Development Office of the United Nations, the Minister of Social Solidarity Ahmed al-Borai said that human dignity can only be achieved through social justice.
He said Egypt has not known the principle of equal opportunity in the past decade. “Social justice is based on equal distribution of income among all, not just a particular group,” he said.
With regard to the Committee of 50 not having been elected, Borai said democracy does not only mean elections. “It is the full participation of all spectrums of people,” he said. “This has already been achieved in the committee.”
On steps taken for transitional justice, the minister said the minimum and maximum wages were set, fees for university dormitories were abolished, and pensions were increased by 10 percent.
“There will be more laws for NGOs, people with special needs, social insurance, slums and the poorest 1000 villages,” he said.