The eminent but anonymous British street artist known as Banksy has posted a mini-documentary on his banksy.co.uk site showing squalid conditions in Gaza six months after the end of the war between the enclave's Islamist Hamas rulers and Israel.

The two-minute documentary was posted on Thursday and like many of Banksy's murals and other art is politically charged and whimsical at the same time. It starts off with a view of clouds from an airplane window while text on the screen says "Make this the year you discover a new destination".

That destination is Gaza, which the film, using mostly text rather than narration, says is "watched over by friendly neighbors" – meaning Israel which patrols the sea and land borders apart from a closed crossing with Egypt. The result is Gaza can only be entered through one of the tunnels shown.

The film also shows Israeli soldiers on patrol, giving the impression they are in Gaza. The troops actually are operating at the Qalandia checkpoint in the West Bank, well known for its mural of Yasser Arafat, which appears in the Banksy video.

Much of the short film focuses on the harsh conditions of life in Gaza – bombed-out buildings, rubble-strewn vacant lots and workmen trying to make repairs.

A subtitle says no cement has been permitted into Gaza since the conflict ended. However, small amounts of cement are now entering the territory under an agreement struck by the United Nations allowing in reconstruction materials under tight restrictions.

"Development opportunities are everywhere" and there is "plenty of scope for refurbishment", the film's subtitles say, noting that 18,000 homes in Gaza were destroyed in the conflict. The small, densely populated territory came under Israeli air strikes and shelling during the fighting.

Towards the end the camera focuses on a mural of a playful-looking kitten, presumably painted by Banksy, with a man looking at it and saying in Arabic that at least the cat found something to play with, because the children in Gaza have nothing. 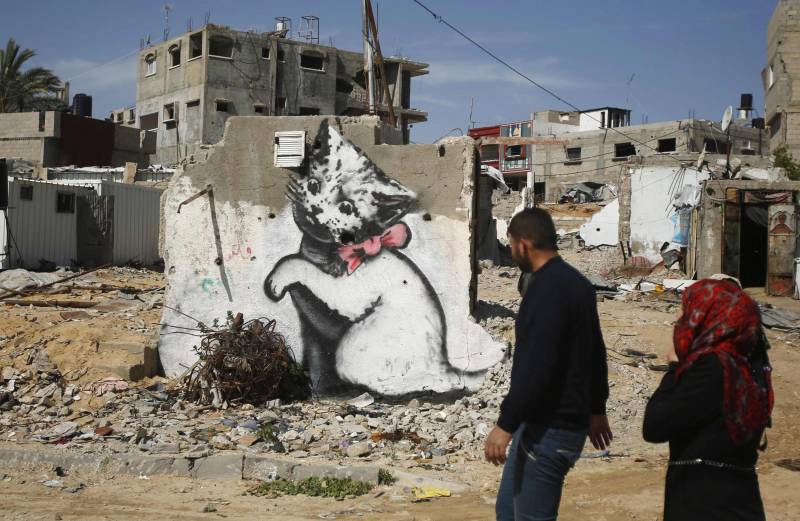 Palestinians walk past a mural of a playful-looking kitten, presumably painted by British street artist Banksy, on the remains of a house that witnesses said was destroyed by Israeli shelling during a 50-day war last summer, in Biet Hanoun town in the northern Gaza Strip

Elsewhere on his website, Banksy says that during the filming a local man had asked him what the meaning was of the kitten. "I explained (that) I wanted to highlight the destruction in Gaza by posting photos on my website — but on the Internet people only look at pictures of kittens."

The film ends with a message painted on a wall: "If we wash our hands of the conflict between the powerful and the powerless we side with the powerful — we don't remain neutral."

Banksy is mostly known for his street art that often commands prices of hundreds of thousands of dollars, but also has produced several films, including the feature-length "Exit Through the Gift Shop" in 2010. 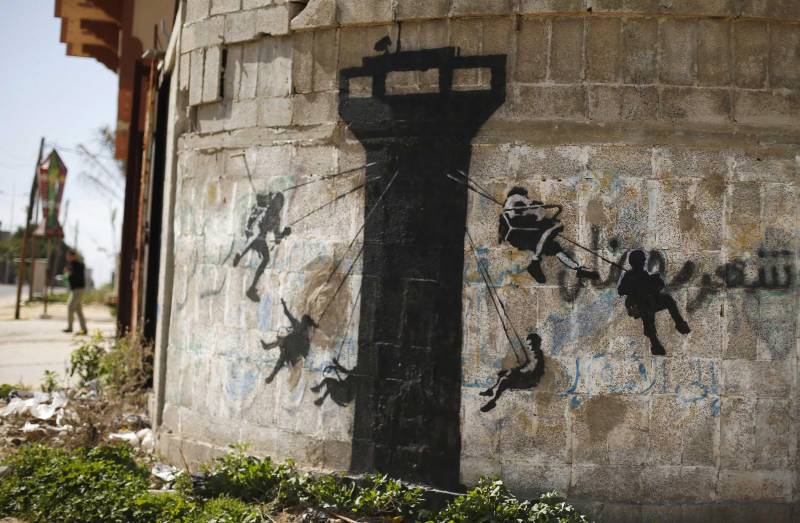 A mural, presumably painted by British street artist Banksy, is seen on a wall in Biet Hanoun town in the northern Gaza Strip.

Why Hamas stayed out of the latest Gaza conflict