Artwork produced in Cairo, regardless of who is making it — visiting artist or lifelong resident — tends often to center on the city itself, an overwhelming presence that imposes on the lives of its residents in myriad and profound ways.

Two new documentaries, “Boulaq: Among the Ruins of an Unfinished Revolution,” directed by Davide Morandini and Fabio Lucchini, and “On the Road to … Downtown,” directed by Sherif al-Bendary, express the deep interconnectedness of the physical city to the lives lived within it. The two works, though distinct in many ways, are marked by carefully constructed visual observations only loosely structured into a narrative. They focus instead on the atmosphere of the neighborhoods they examine, and the daily rhythm of the neighborhoods’ inhabitants.

“Boulaq” is a short film, only 26 minutes long, filmed in the neighborhood of Boulaq Abul Ela, adjacent to downtown. Director Morandini told Egypt Independent, “My first day in Boulaq was my first day in Cairo, I was staying downtown and I bumped into this strange neighborhood. I was struck by this strong difference between the Hilton, the downtown buildings and this area.”

Morandini later returned to Cairo in February 2011 and began working as a journalist. He saw in Boulaq a story at the center of the revolutionary narrative, yet outside the scope of the many camera lenses pointed on Cairo, and chose to make it the subject of his first film. The residents of the central neighborhood, in demand by companies interested in developing the city, have been subject to arbitrary evictions and home demolitions for years; and grievances at the heart of the 25 January revolution — for a police force and government that answers to the rule of law, for example — are of immediate importance to daily life and basic security.

In the film, one resident tells the camera, “We wanted to defend our housing rights. … We want our homes to be places of dignity. … They demolish houses for the interest of investment companies.”

The film is simply constructed. It presents the viewer with a situation: a close-knit neighborhood full of people, betrayed and marginalized by their government, who live in constant fear of losing their homes and being resettled in the desert development of Nahda. Residents describe their hardship and their attachment to the neighborhood. But more than anything, the story is told through carefully assembled images that show the lively, if decrepit, environment of Boulaq, nestled just behind the hotels and government buildings that line the Nile — looming symbols of money and power encroaching on a precarious existence. In contrast to this warm, threatened neighborhood, Nahda is a moon colony so disconnected from the city itself that resettlement there seems akin to Soviet-style internal exile.

“On the Road to … Downtown” is made from a much more intimate perspective, and carries much less of an overt political message. If “Boulaq” seeks to capture the plight of a neighborhood, “Downtown” seeks to capture a neighborhood’s soul. But “Downtown” was nonetheless also created as a portrait of a place undergoing swift and constant change, tied in no small part to the growing social stratifications and polarizations that are now playing out, as various groups fight to shape Egypt’s future, on the street and in the halls of Parliament. 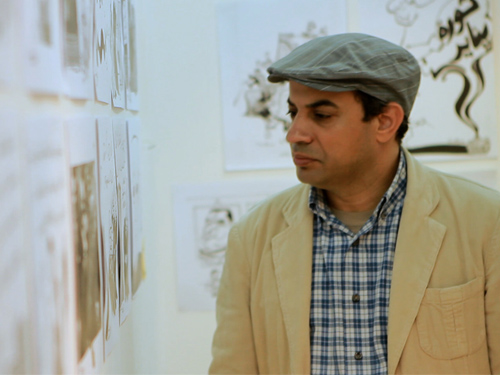 Bendary first began talking about making the film in September 2010. He told Egypt Independent, “We felt then that there was some kind of change happening downtown — generally in Egypt — but especially downtown.”

Similar to in Boulaq, he saw investment by large corporations coming with ambitious plans for restructuring the area. This potential development stood alongside an ever-growing art scene and constantly expanding informal entrepreneurship that have been gradually transforming the landscape of the area for the past decade.

Bendary had planned to begin shooting on 29 January 2011, and, of course, was forced to postpone. But his vision for the film had not shifted significantly when he finally began to shoot last spring, perhaps because exactly what he had always sought to capture was a neighborhood in flux.

“Even after the revolution, we still simply wanted to capture the moment in that place as it is,” Bendary explains.

The film is structured around six individuals and their distinct relationships with downtown. Abdou al-Baramawi is an artist and writer who moves from coffee shop to art gallery to coffee shop, grinning and chatting throughout the day. Architect and urban planner Omar Nagati lovingly reconstructs a cardboard maquette of the area, demonstrating his intimate knowledge of the streets and how they fit together. Talaat Harb sock merchant Hussein Fahmy adds a less romanticized perspective on downtown, watching quietly as his more aggressive T-shirt-selling colleagues stage shouting matches to attract customers on one of the most chaotic streets in the city.

“Downtown” clearly conveys immense affection for its subject, and though it is not exactly a nostalgic film, interviews with Maryse Helal, who owns Estoril restaurant and grew up in the apartment now occupied by the Townhouse Gallery, are steeped in yearning for a city of the past that has almost completely disappeared. Helal shares her decades of memories, showing a photograph of herself taken by the legendary portraitist Van Leo, and bringing back thoughts of a time when downtown was more cosmopolitan, and the beauty of the area’s architecture was neither faded nor confused. Helal says in the film, “Even when [downtown] lost its beauty, at first it was still coherent. Now the buildings are not built properly and everyone paints his balcony purple.” She adds somewhat mournfully, “But I still like it very much the way it is.”

Considering the vast shifts that have occurred since Helal’s childhood, Bendary emphasized a sense of urgency in capturing the ever-evolving neighborhood before it again transforms into something new and unrecognizable.

“It is like the last moments of a sunset,” says Bendary, “when change occurs very fast. So we wanted to document and capture the spirit of this place.”

While the impulse to make “Downtown” come from a place of intimate familiarity and a sensitivity to the life cycle of a place that only comes with years of lived observance, “Boulaq” is filtered through the eyes of visitors struck by the dramatic juxtaposition of poverty and power, and the vulnerability of a vibrant neighborhood. Both films succeed in presenting the imprint of the city — unyielding yet responsive, where the landscape both shapes and is shaped by powerful and shifting social and political dynamics — on the lives of its residents.

“Boulaq: Among the Ruins of an Unfinished Revolution” will screen Tuesday at 5 pm in Oriental Hall at the American University in Cairo’s downtown campus.

“On the Road to … Downtown” will screen Tuesday, 3 April at the French Cultural Center, 1 Madrasset al-Huquq al-Frinseya, Mounira. Check the CFCC website for details.

Tags boulaq Boulaq: Among the Ruins of an Unfinished Revolution Davide Morandini downtown Fabio Lucchini On the road to… Downtown Sherif al-Bendary