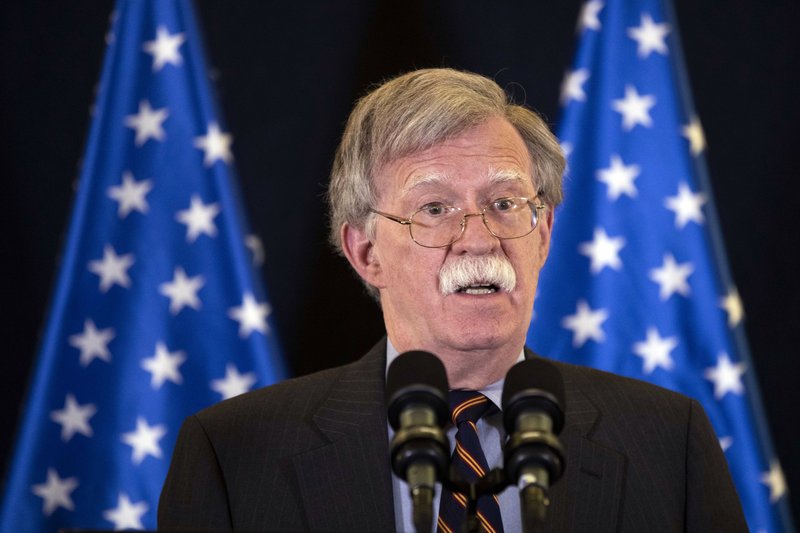 John Bolton said a “lot of progress” has been made, but he refused to say what the plan entailed or when it may be publicized. The Trump administration recently began staffing its Mideast policy team ahead of the plan’s expected release.

Trump officials have long promised the most comprehensive package ever put forward toward resolving the Israeli-Palestinian conflict. The Palestinians have indicated they consider it a non-starter given Trump’s bias toward Israel and his unilateral recognition of Jerusalem as its capital.

At a West Virginia rally on Tuesday, Trump said Israel will pay a “price” for that move and the Palestinians will “get something very good” in return.

Bolton would not address the Trump comments or say what the Palestinians could expect.

“Work continues,” he said at a press conference in Jerusalem. “There are a lot of consultations and there is no decision on a timetable for when the full details of the plan will be announced.”

Bolton said the Palestinians have “been used as agents by radical leaders over the years for their own political purposes” and that when the plan was rolled out they would discover that the Trump administration wants to give them a chance for a decent life.

Most of Bolton’s three-day visit to Israel, however, was focused on Iran.

Bolton has been a strident critic of the nuclear deal signed between world powers and Iran, which the United States backed out of earlier this year. He has pushed for greater pressure on Tehran to get it to halt its support for regional militant groups and its development of ballistic missiles.

Israel was also deeply opposed to the nuclear accord, which lifted international sanctions on Iran in return for restrictions on its nuclear program.

He reiterated that he hoped to work with Russia on getting Iran’s forces out of Syria and issued a stern warning to President Bashar Assad’s government ahead of an expected assault on the rebel-held Idlib province.

“We are obviously concerned about the possibility that Assad may use chemical weapons again,” he said. “Just so there’s no confusion here: if the Syrian regime uses chemical weapons we will respond very strongly and they really ought to think about this a long time before they come into any decision, because there is no ambiguity in the US position on this point.”