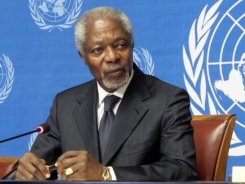 Annan argued in an interview published in the Times newspaper that Blair could have changed Bush's mind because of the special relationship between the two nations and the two leaders.

Annan said he often had contemplated what might have happened if "Blair had said 'George, this is where we part company. You're on your own,'" following the failure to secure a second UN resolution.

"I really think it could have stopped the war," added the Nobel peace laureate.

Annan was UN secretary general at the time of the crisis.

A first Security Council resolution, which offered Iraq a final opportunity to comply with its disarmament obligations passed unanimously in November 2002.

But a second resolution proposed by the US, Britain, and Spain in 2003 that called for action to be taken against Saddam Hussein's regime was withdrawn when it became clear it would be vetoed.

The US decided that the resolution was not needed before military action could lawfully take place, and the invasion commenced on 20 March.

The invasion triggered eight years of sectarian conflict in Iraq, resulting in more than 100,000 civilian deaths.

Annan rejected suggestions that his resignation, or that of then-US Secretary of State Colin Powell, would have altered the course of history.

Annan also dismissed Archbishop Desmond Tutu's call for Bush and Blair to be put on trial at the International Criminal Court. Both had been democratically elected, he said, and were only acting in their national interests.

Annan was the UN Arab League envoy to Syria from February until August, but resigned after his peace plan failed to prevent further fighting between rebels and forces loyal to President Bashar al-Assad.

The diplomat told the Times that Assad had to go, arguing that the leader had lost all legitimacy.

Annan gave the interview to mark the launch of his memoirs: "Interventions –– a Life in War and Peace."