The notorious black cloud has hovered over Mansoura for the past two days, reducing visibility and impairing breathing, even as environmental groups filed hundreds of reports against farmers burning rice husks, which is said to cause the haze.

"The smoke from burning rice husks is choking the entire city," said Mohamed Mostafa Keshk, a member of the Mansoura city council. "The roads of Meet Ghamr-Mansoura and Talkha-Sherbeen are thick with smoke." Keshk accused the Egyptian Environment Affairs Agency (EEAA) of negligence. The EEAA has supposedly reached agreements with private companies to recycle agricultural waste.

According to Mansoura locals, visibility on highways has been severely reduced due to the black cloud. "Many accidents happened, especially on the Mansoura-Sembellaween road which saw four accidents alone," said Mohamed Abdel Hady Shouman, a driver.

The University Pediatric Hospital received approximately 80 children between two and seven years of age who suffered from breathing problems. One of the doctors at the hospital, who spoke on condition of anonymity, said that 80 per cent of all children admitted to the hospital over the last two days suffered from breathing and chest problems and asthmatic fits, resulting from the stifling smoke.

Abu Bakr el-Shahawy, head of the EEAA, said that the black cloud was caused by meteorological changes rather than burning rice husks. "Acts of burning rice waste this year are much lower than in previous years," he said, pointing out that in cooperation with the Water Surface Police and the Environment Police, 507 reports had been filed against violators.

The situation was no better in Damietta, where the dark smog hung over much of the governorate. Hardest hit were Kafr Saad, el-Zaraa, and Farskour, causing low visibility and breathing trouble for citizens and drivers on Damietta-Mansoura el-Gharby road.

Mazhar Noaman, general manager of environmental affairs in the governorate, said that campaigns were bring launched to identify violators and follow up with appropriate legal action. In the coming stage, campaigns will be launched round-the-clock, with more campaigns at dawn. It is said that farmers prefer to burn their waste early in the day to avoid being caught. 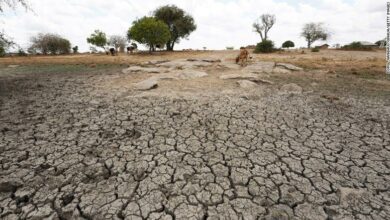 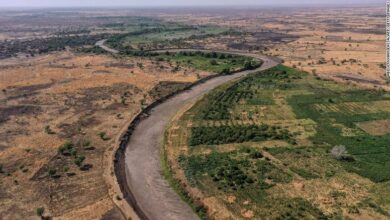 More than 40% of Earth’s land surface must be conserved to stop the biodiversity crisis, report warns