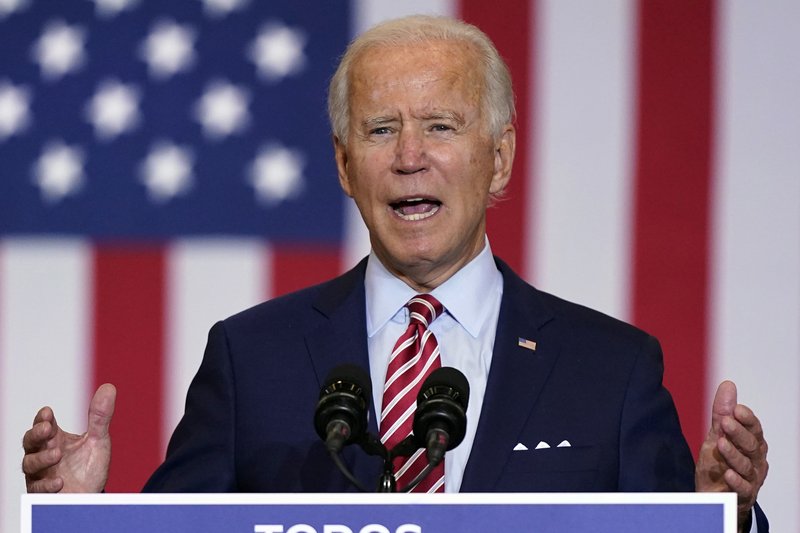 WASHINGTON (AP) — Democrat Joe Biden leaves little doubt that if elected he would try to scale back President Donald Trump’s buildup in nuclear weapons spending. And although the former vice president has not fully detailed his nuclear priorities, he says he would make the US less reliant on the world’s deadliest weapons.

The two candidates’ views on nuclear weapons policy and strategy carry unusual significance in this election because the United States is at a turning point in deciding the future of its weapons arsenal and because of growing debate about the threat posed by Chinese and Russian nuclear advances.

China, whose relatively small nuclear force is growing in sophistication, is cited by the Pentagon’s top nuclear commander as a leading reason why the United States should go all out on nuclear modernization.

“We are going into a very different world,” Adm. Charles Richard, the head of US Strategic Command, said Sept. 14. “We are on a trajectory, for the first time in our nation’s history, to face two peer nuclear-capable competitors.” He was referring to Russia, which has long been a nuclear peer, and China, whose leaders Richard says have put a strategic nuclear buildup “next on their to-do list.”

Days later, Richard said China could become a peer “by the end of the decade, if not sooner.” But other estimates suggest a slower pace. The Pentagon recently said Beijing may double its nuclear stockpile over the next 10 years, which would still leave it far behind the US

Trump entered the White House in 2017 with little to say on the subject of nuclear weapons, but his administration produced a policy document a year later that the Pentagon portrayed as largely tracking the path of the Obama administration. Trump did, however, add two weapon types and beef up the budget for a years-long overhaul of the nuclear arsenal — an overhaul that Biden sees as excessive.

“Our nuclear now is in the best shape it’s been in decades,” the president said this month, although the military says the arsenal’s main components are so old they are long past due for replacement. He has boasted in broad, sometimes cryptic, terms of US nuclear advances, telling journalist Bob Woodward in 2019 that he had built a secret nuclear weapon that neither Russian nor China knew about.

If reelected, Trump would be expected to stay on his path of modernizing the nuclear arsenal, which has bipartisan support in Congress despite growing budget pressures. Less clear is how Trump would approach nuclear arms control, including the problem of North Korea’s unconstrained arsenal. His administration has walked away from one arms control deal with Russia and balked at extending an Obama-era strategic nuclear treaty with Russia that Biden says he would keep in place.

“If future budgets reverse the choices we’ve made, and pour additional money into a nuclear buildup, it hearkens back to the Cold War and will do nothing to increase the day-to-day security of the United States or our allies,” Biden said in a Jan. 11, 2017, speech at the Carnegie Endowment for International Peace.

James Acton, a nuclear expert at the Carnegie Endowment, says Biden’s instincts on nuclear weapons are more liberal than those of much of the Democratic Party’s defense establishment. But that doesn’t necessarily mean he would fundamentally change US nuclear policy.

“In practice, there are often pressures to continue the status quo,” Acton said in an interview.

Biden embraces the notion that nuclear weapons should play a smaller role in defense strategy and that the ultimate goal should be a nuclear-free world. He has not spelled out how he would pursue this, but he has dropped clues.

He has said, for example, that he opposes the Trump administration’s decision to develop and deploy two types of missiles armed with less-powerful “low-yield” nuclear warheads. One is a sea-launched cruise missile that is some years from being fielded; the other is a long-range ballistic missile that the Navy began deploying aboard submarines nearly a year ago.

“Bad idea,” Biden said in July 2019. Having these makes the US “more inclined to use them,” he added.

During the campaign, Biden also has embraced what nuclear strategists call a “no first use” policy. In simplest terms, that means not initiating a nuclear war — not being the first to pull the trigger, so that in a nuclear crisis, the US president might opt to unleash a retaliatory strike but not a preemptive one. Longstanding US policy has been to reserve the option of striking first, arguing that this makes war less likely.

Obama considered but rejected a shift to “no first use.”

The Biden campaign has made few pronouncements on US nuclear weapons policy or strategy and it declined to make an adviser available for an interview. The campaign website says Biden believes “the sole purpose of the US nuclear arsenal should be deterring — and if necessary, retaliating against — a nuclear attack. As president, he will work to put that belief into practice, in consultation with our allies and military.”

In a questionnaire last year by the Council for a Living World in which Biden and other candidates were asked whether the US should review its policy reserving the option of using nuclear weapons first, Biden said yes but did not elaborate. He also agreed that modernizing the US arsenal could be done for less than the currently projected $1.2 trillion.

Some have speculated that Biden would consider dropping the plan to build a new nuclear intercontinental ballistic missile force, replacing the Minuteman III fleet fielded in 1970. That project is expected to cost at least $85 billion.

Loren Thompson, a military analyst at the Lexington Institute, believes Biden would stick to the missile program.

“This outcome will result partly from the fact that Joe Biden is a common-sense centrist who respects the views of experts,” Thompson wrote recently. “He will find few if any experts in the nation’s nuclear establishment who think phasing out ICBMs would make us safer.”

Image: Democratic presidential candidate former Vice President Joe Biden speaks during a Hispanic Heritage Month event, Tuesday, Sept. 15, 2020, at Osceola Heritage Park in Kissimmee, Fla. Democrat Joe Biden has left little doubt that if elected he would try to scale back President Donald Trump’s buildup in nuclear weapons spending. And although he has not fully detailed his nuclear policy priorities, Biden says he would push for less reliance on the world’s deadliest weapons. (AP Photo/Patrick Semansky)