US President Joe Biden will speak with China’s Xi Jinping Friday about “managing the competition between our two countries as well as Russia’s war against Ukraine and other issues of mutual concern,” White House press secretary Jen Psaki said in a statement Thursday.

“This is part of our ongoing efforts to maintain open lines of communication between the United States and the PRC,” Psaki said.

More context: A Western official and a US diplomat told CNN earlier this week that the US has information suggesting China has expressed some openness to providing Russia with requested military and financial assistance as part of its war on Ukraine.

It is not yet clear whether China intends to provide Russia with that assistance, US officials familiar with the intelligence tell CNN. But during an intense, seven-hour meeting in Rome, a top aide to Biden warned his Chinese counterpart of “potential implications and consequences” for China should support for Russia be forthcoming, a senior administration official said.

Biden and Xi’s last known conversation took place in November during a three-and-a-half hour virtual summit. The highly anticipated summit yielded no major breakthroughs — though none were expected ahead of time — and officials dismissed the notion the summit was intended to ease what has become an increasingly tense relationship. 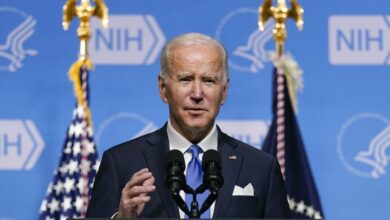 Biden to urge Americans to get vaccinated as Christmas nears