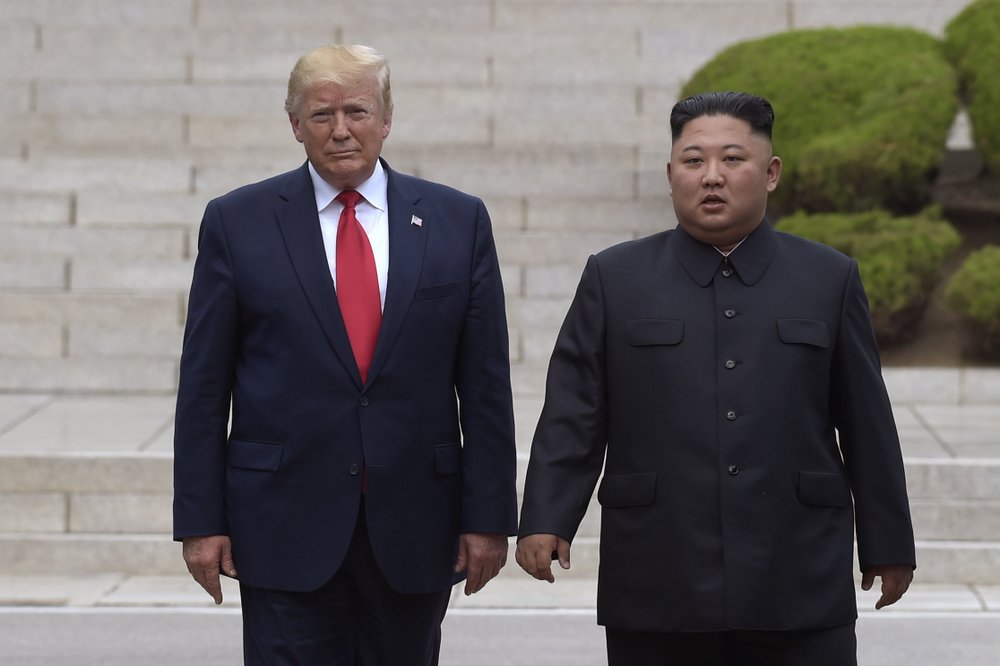 with North Korean dictator Kim Jong Un, President Donald Trump boldly declared a breakthrough. “There is no longer a Nuclear Threat from North Korea,” he tweeted.

Yet two years later, despite two more face-to-face meetings and many exchanges of warm words between the leaders, North Korea continues to build up its nuclear program and test missiles. And even if Trump still hopes for an agreement, his administration isn’t betting on it happening before the November election.

The last significant contact between the two sides was outside of Stockholm last October. North Korea declared the dialogue a failure in a statement written before talks even began, administration officials say. Communication has been limited to the lower-level “New York channel” at the United Nations.

North Korea’s recent belligerence against South Korea has only stoked more tension. The North has lashed out at South Korea for not breaking from Washington to restart inter-Korean economic projects that have been held back by US-led sanctions. Pyongyang blew up a multistory liaison office in the border town of Kaesong, a place where the North and South could talk and improve relations. The North also threatened military retaliation against the South, but then backed off.

Trump administration officials are hard pressed to find signals of interest from Pyongyang in resuming talks. But they are anticipating the possibility of an “October surprise” before the Nov. 3 election. They aren’t sure if this would be an olive branch from Kim to resume talks or fireworks in the form of an atomic test or missile launch. The officials spoke on condition of anonymity to discuss the administration’s thinking on a sensitive diplomatic matter.

The officials note, however, that despite the North’s harsh rhetoric, Kim has not taken any irreversible steps, potentially leaving the door open, if only slightly, to renewed discussions. Experts aren’t ruling out the possibility of a small agreement that Kim and Trump could sign, which could burnish Kim’s image at home and give Trump a foreign policy win before the election.

“There was some discussion among the Korea watchers where President Trump and Kim Jong Un will go for a last-minute, eleventh-hour deal — an October surprise — where North Korea agrees to partly freeze its weapons of mass destruction programs for partial sanctions relief,” said Sue Mi Terry, a fellow at the Center for Strategic and International Studies who formerly worked at the CIA and National Security Council.

She noted Kim said this year that he would freeze or reduce the nuclear program if his conditions are met. “I’m wondering if he’s trying to go for the last possible minute deal with President Trump,” she said.

The two leaders last met a year ago during Trump’s made-for-television stroll across the Demilitarized Zone to become the first sitting U.S. president to step foot in the North.

After the first summit, in Singapore in 2018, Trump tweeted, “There is no longer a Nuclear Threat from North Korea. Meeting with Kim Jong Un was an interesting and very positive experience. North Korea has great potential for the future!”

Trump has repeatedly gushed about his relationship with Kim, the third leader in a dynasty reviled by Republicans and Democrats alike for human rights abuses and belligerent conduct. Trump told a rally in 2018 that Kim “wrote me beautiful letters and they’re great letters. We fell in love.”

“After three made-for-TV summits, we still don’t have a single concrete commitment from North Korea. Not one missile or nuclear weapon has been destroyed, not one inspector is on the ground,” Biden wrote in response to a question posed by the Council on Foreign Relations.

“If anything, the situation has gotten worse. North Korea has more capability today than when Trump began his ‘love affair’ with Kim Jong Un, a murderous tyrant who, thanks to Trump, is no longer an isolated pariah on the world stage,” Biden said.

Trump says it’s still early in the US-North Korea diplomatic process and insists he hasn’t caved during his bromance with Kim and has maintained sanctions on Pyongyang. The U.S. negotiating stance hasn’t changed from its longtime posture of demanding full, verifiable denuclearization.

Trump has said that the lack of war with North Korea is essentially a win for the United States.

Intaek Han, research fellow at Jeju Peace Institute, a top foreign policy think tank in South Korea, notes that throughout the latest provocations from the North, there have been no territorial incursions, no lives lost and no indication that things would escalate into a military conflict. He also points out that Trump himself has not been the target of the North’s recent hostile rhetoric.

Still, some see the risk that Kim, who is hard-pressed to improve his country’s deteriorating economy, could soon take more provocative actions.

“All of this said, it’s not likely that North Korea will resort to a major provocation, such as a nuclear or ICBM (intercontinental ballistic missile) test, in the near future,” he said.

Image: FILE – In this June 30, 2019, file photo President Donald Trump, left, meets with North Korean leader Kim Jong Un at the North Korean side of the border at the village of Panmunjom in Demilitarized Zone. Trump is still waiting for his two years of one-on-one diplomacy with Kim Jong Un to pay off with a deal that eliminates the threat of North Korea’s nuclear weapons. (AP Photo/Susan Walsh, File)

North Korea threatens to beef up military presence around DMZ