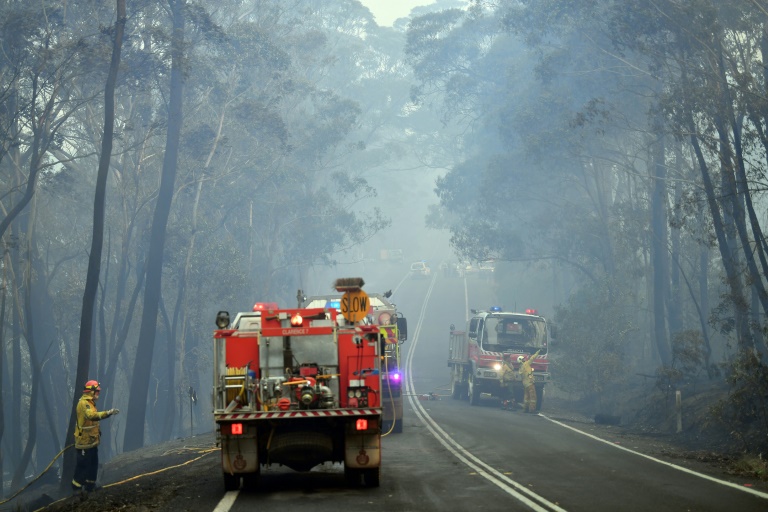 “Rain would be best,” said Moyle, who juggles firefighting shifts of up to 18 hours with running his own maintenance business and managing a family cattle station.

The colossal task of fighting New South Wales’ unprecedented bushfires falls largely to people like Moyle — a band of doctors, farmers and factory workers who at 70,000-strong are the world’s largest volunteer fire service.

For weeks the 57-year-old and his crew have toiled in searing temperatures and thick acrid smoke as they try to curb a “mega-blaze” that has turned a swathe of national park near Sydney to ash.

“As you get older like me it’s hard, it’s very tiring. It takes a toll on everybody here.”

The risks are enormous and the sacrifice is immense. Two volunteer firefighters have died and some have had their homes destroyed while they were out saving other people’s properties.

“I was sitting having a cup of tea yesterday and a little old lady came up to me and sort of gave me a hug and I actually had tears,” he said. “You just need people knowing what you’re doing, we’re just trying to do our best.”

Australia is no stranger to bushfires, but even among veterans there is a sense that this year’s climate change-fuelled blazes are different.

Bushfires have been raging along Australia’s east coast for months, burning three million hectares (7.4 million acres) — equivalent to the size of Belgium — and razed more than 800 homes in worst-hit New South Wales alone.

“It’s an emotional thing, because you’ve got to be on top of the game all the time, or someone will get hurt.”

Stokes worries about the strain on his family, and his wife is concerned about the dangers he faces.

Scientists say Australia’s fire seasons are beginning earlier and burning with more ferocious intensity due to climate change. Much of the country’s east is also gripped by a prolonged drought — that has worsened fire conditions.

Retired NSW Fire and Rescue commissioner Greg Mullins, a leader of ex-fire chiefs advocating for climate action, has predicted the season could stretch into May — months beyond its typical endpoint — and pile more pressure on volunteers.

Since 1896 — when the first volunteer brigade was founded in New South Wales — the service has relied on amateurs because hiring professional staff year-round across a vast landmass would be prohibitively expensive and, for most of the year, unnecessary.

But shrinking rural communities, an ageing population and the prospect of longer and more intense fire seasons are all straining the volunteer model.

“When this sort of tragedy confronts an organization like the RFS, everybody hurts, it hurts everybody to the core and we know that we’ve lost absolutely valued members of our RFS family,” he said.

“We know that these men and women, our volunteers, are remarkable individuals.”

State of emergency as bushfires rage in Australia