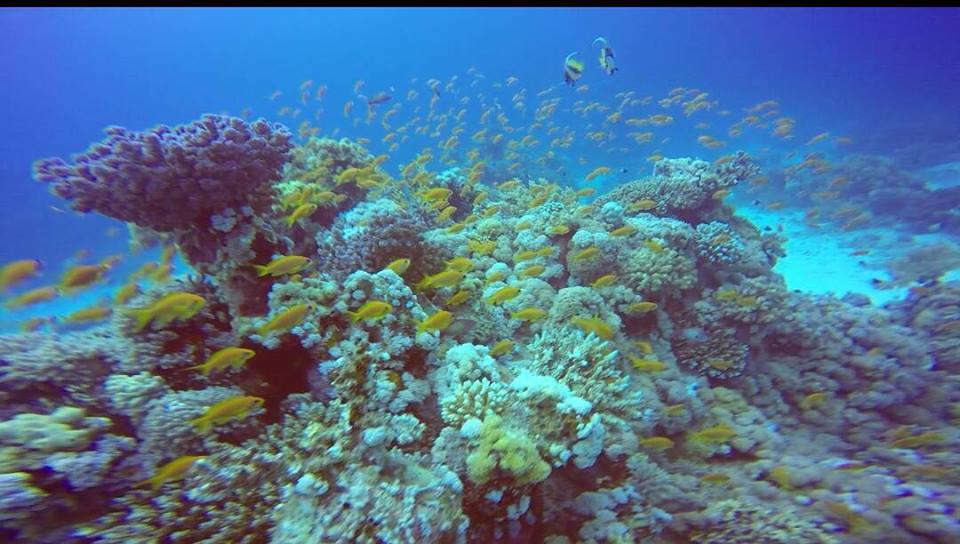 A group of students from the American University in Cairo took to social media last month to raise awareness of the polluting of the Red Sea and the importance of protecting marine life, as part of their graduation project.

Through their environmental campaign, dubbed “Khat Ahmar,” meaning ‘red line’, they aim to inform Egyptians about the negative impact of polluting the Red Sea, and why it’s beneficial to ensure its cleanliness through a series of short videos posted online.

The Integrated Marketing Communications students pronounced their campaign as the first of its kind due to the precedent use of social media to tackle the issue, and the reach out to the widest audience possible.

Their Facebook page gathered a thousand followers in a few months’ time, and has numerous videos and articles that cover a variety of issues — from the hazards of urinating in the sea, to how harmful feeding the fish can be, and how littering can negatively affect marine life for hundreds of years.

“It’s unfortunate how many people are not aware of how their actions can endanger marine wildlife. We aim to incite behavioral change through our short videos and campaign,” Mennatullah Hassan, one of the students working on the campaign said, adding that a simple act like throwing a plastic bottle in the water can take up to 450 years for its remains to completely dissolve, putting fish’s lives in constant danger.

The AUC students partnered up with Hurghada Environmental Protection and Conservation Association (HEPCA), a nongovernmental organization that specializes in the field of marine and land conservation, to determine the areas where people can help protect marine wildlife. The subjects they have tackled include coral reefs, dolphins and sharks, which are major tourist attractions but are usually loomed by misuse and pollution.

“HEPCA was an eye opener to us on how careless diving, visitors’ misbehavior and waste disposal can massively hurt the corals,” Hassan said, adding that once ruined, it could take up to 100 years to grow again. Consequently, they produced a video tackling the issue and underlying those facts.

There are about 250 types of coral reefs worldwide and 8 percent of them are found only in the Red Sea, HEPCA says.

According to the Egyptian Ministry of Tourism, 80 percent of all tourism activity in Egypt is associated with marine life in the Red Sea area. Research suggests that one-meter square of coral reefs generates $US 300 per year and when it is destroyed, it takes between 50-100 years to re-grow.

The campaign also sheds light on the problem of human urine in the sea.

According to HEPCA, there are 400,000 visitors to the Red Sea yearly, locals and foreigners. If each person urinates about 250 milliliters while swimming, the equivalent of a trip to the bathroom, then this is almost as if an entire sewage pipe has been leaked into the sea.

Through their visually appealing and enlightening videos, Khat Ahmar aims to further encourage people to help firsthand in the cleaning up of the Red Sea as volunteers or through donations to initiatives.

Human excreta are greening the environment