An explosion at an ammunition depot in annexed Crimea injured at least two people on Tuesday, the head of the Russian-controlled Crimea administration Sergei Aksyonov said on his Telegram channel.

Aksyonov said the explosion in the village of Maiskoye, near the town of Dzhankoi, was caused by a fire, citing the Russian Ministry of Defense. Detonations were ongoing, he added.

“The evacuation of residents is underway, people are taken out of the five-kilometer zone from the incident to ensure safety. The forces of the Ministry of Emergency Situations, the Ministry of Defense of the Russian Federation, the Russian Guard, emergency services are involved,” Aksyonov said.

What Ukraine says: Kyiv has not claimed any responsibility for the incident, but commenting on the explosions on Twitter, Ukrainian presidential adviser Mykhaylo Podolyak said it was “demilitarization in action.”

“Morning near Dzhankoi began with explosions. A reminder: Crimea of normal country is about the Black Sea, mountains, recreation and tourism, but Crimea occupied by Russians is about warehouses explosions and high risk of death for invaders and thieves,” Podolyak said.

Some context: The explosion Tuesday is the second security incident at a military installation in Crimea in a week. Last Tuesday, a series of explosions rocked a Russian air base at Novofedorivka, on Crimea’s west coast, destroying at least eight Russian military aircraft, satellite imagery reviewed by CNN showed. The explosions also killed one person and injured 14, according to the Crimean Health Ministry.

The Russian Defense Ministry said the incident was caused by the accidental detonation of ammunition. Ukraine would not definitively confirm it was responsible for an attack on the air base.

Alexey Navalny believes the West should sanction 6,000 oligarchs identified by his foundation

Photos: Pope Tawadros receives the widow of slain priest of Alexandria and family 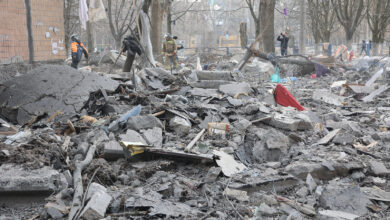 Ukrainian officials say humanitarian convoys were stopped and raided by Russian forces. Here’s what we know