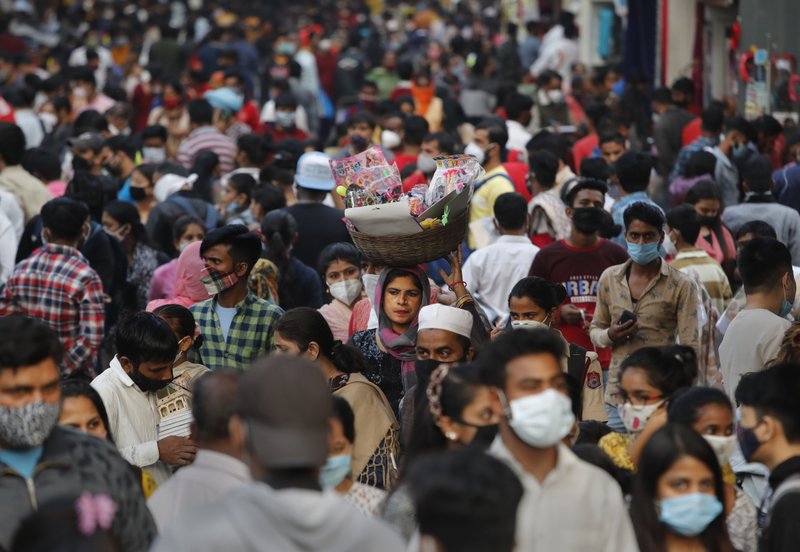 NEW DELHI (AP) — India’s overall tally of new coronavirus cases remained steady on Saturday, but officials were watching a surge of cases in the capital that comes as people socialize during the festival season.

India’s has seen 8.7 million infections since the pandemic began — the second-most in the world — but daily new infections have been on the decline from the middle of September. The county has also seen more than 129,000 virus deaths.

New Delhi has seen a spike in recent weeks, recording more new cases than any other Indian state. The rising numbers coincide with a busy festival season nationwide, with millions celebrating Diwali, the Hindu festival of lights, on Saturday.

COVID-19 beds in government-run hospitals are nearly full and the availability of intensive care unit beds with ventilator support in the city has reached an all-time low, according to the government data. The New Delhi government has said that cases are projected to rise to nearly 12,000 daily by the end of November.

In other developments in the Asia-Pacific region:

— Authorities in Sri Lanka said operations at the country’s main port have been hampered after 60 port workers tested positive for COVID-19 and another 200 workers were quarantined. Colombo port officials said operations have been delayed and nearly a dozen ships are waiting outside the port to enter. A large number of containers have also piled up. Port officials said they are calling ex-port workers to help. Colombo port is considered a key shipping hub in South Asia and the lifeline of Sri Lanka’s economy. The port is located in the heart of Colombo, which has seen a fresh outbreak of the virus since last month. During the last 24 hours, 468 new infections were reported.

— South Korea’s soccer association said four players and a staff member of the men’s national team have tested positive for COVID-19 after arriving in Austria for a friendly match with Mexico. Korea Football Association spokesperson Kim Min-soo said the rest of the team will be re-tested before a decision is made whether to cancel the match with Mexico, which was scheduled for Saturday night in Wiener Neustadt, south of Vienna. The KFA said none of the five who tested positive were showing symptoms and that players and staff were currently quarantining in their rooms. At home, South Korean health authorities reported 203 new cases of COVID-19, the highest daily jump in 73 days.

Image: A woman without a mask walks in a crowded market selling toys in New Delhi, India, Thursday, Nov. 12, 2020. Authorities in New Delhi have banned firecrackers and are appealing to people to celebrate the Hindu festival of lights at home. Coronavirus infections have been rising in the capital and authorities are worried large festival crowds will worsen the virus situation. (AP Photo/Manish Swarup)

The Latest: WHO says COVID-19 spread in Europe accelerating