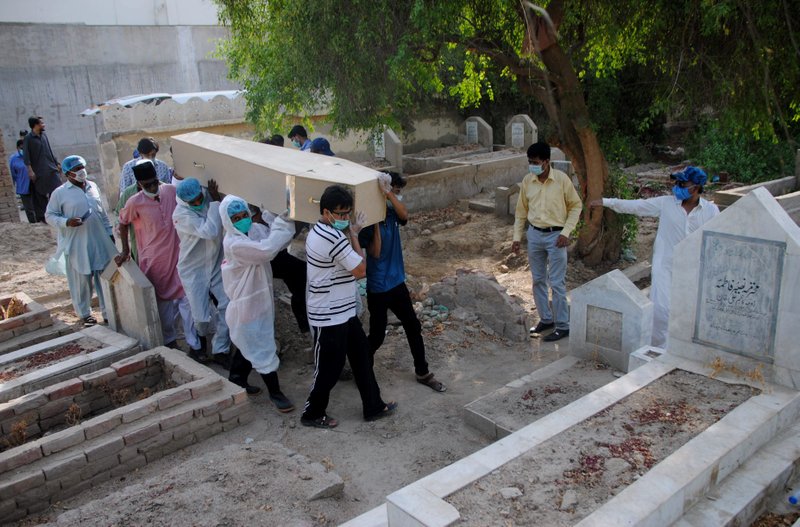 ISLAMABAD (AP) — The coronavirus is spreading in Pakistan at one of the fastest rates in the world, and overwhelmed hospitals are turning away patients. But the government is pushing ahead with opening up the country, trying to salvage a near-collapsed economy where millions have already slid into poverty from pandemic restrictions.

Further complicating the dilemma, as the government pins its main hope for stemming the virus’ rampage on social distancing and masks, many in the public ignore calls to use them.

“I am nervous when I go out because I see our people are still not taking it seriously,” said Diya Rahman, a broadcaster at Radio Pakistan in the capital, Islamabad. Two of her colleagues have died of the virus and more than 20 others have tested positive.

She fears that “until they see their families are dying they won’t understand that we can save ourselves if we adhere to the guidelines, to wear masks.”

Pakistan is a prime example of fragile developing countries that say they’ll just have to live with rising infections and deaths because their economies cannot withstand an open-ended strict lockdown.

But the rapid acceleration in infections in Pakistan this month could be an indicator of what faces other countries in Asia, Africa and Latin America.

The rate of new cases in Pakistan leaped from around 2,000-3,000 a day in late May to as high as 6,800 a day in mid-June. Deaths are nearing 150 a day. So far, more than 180,000 people have been infected in this country of 220 million, and the government on Sunday said that the number could total 1.2 million people in August. Authorities have reported 3,590 deaths.

Pakistan butted heads with the World Health Organization over the spike. Earlier in June, the WHO warned the government in a letter that Pakistan was in the top 10 countries in the speed of the virus’ spread and faced devastating effects from opening prematurely. It urged the government to alternate between two weeks of lockdown and two weeks of opening. The Associated Press acquired a copy of the letter, which was partially reported in the press.

Prime Minister Imran Khan said the refusal to impose a complete lockdown saved the country from economic collapse. In televised speeches, he has taken to pleading with Pakistanis to wear masks, ignore countless conspiracy theories and take the virus seriously.

As cases spiraled, the government last week shut down some districts in Islamabad and other cities where fresh outbreaks have been identified. But otherwise it has largely continued with lifting coronavirus restrictions.

The restrictions were initially imposed in mid-March, but within weeks, they were lifted bit by bit. Now, most businesses are reopened, including markets and malls, as is public transportation. Schools, restaurants and wedding halls remain closed, gyms had to be shut down again, but mosques never closed because of clerics’ refusal. Last week, the border with Iran — blamed as the source of the first infections here — was reopened for trade only.

At the same time, hospital beds are filling up.

Zeeshan Hassan, a local businessman, said his uncle was turned away from three hospitals in the southern city of Multan, an area heavily affected by COVID-19 cases. Administrators said they had neither a bed nor the medicines to treat him, Hassan said. His uncle was finally admitted to a government hospital, where he died within 15 hours.

A few family members dressed in protective equipment were allowed to bury him.

“Now we are all afraid we will get this COVID-19,” said Hassan.

Health professionals are being infected at an alarming rate — more than 3,000 testing positive so far with more reported each day, said Dr. Qaiser Sajjad, secretary-general of the Pakistan Medical Association.

Even before the pandemic, Pakistan lacked enough trained health personnel to administer equipment like ventilators. With fewer than 3,000 acute care beds for a population of 220 million people, Sajjad warned the system was teetering on collapse.

“People are now starting to get scared and the government is now taking it seriously, but I think we are too late because COVID-19 has already spread massively everywhere in the country,” he told the AP.

He said misinformation is rampant, and many Pakistanis believe doctors made up the coronavirus to explain deaths caused by an inept and failing health care system. It also doesn’t help that some government officials have gone on TV to downplay the impact of the new virus, said Sajjad.

“The poor people and ignorant people, they absolutely don’t believe the virus exists. They think it is some conspiracy, all between the government and doctors,” he said.

Pakistan is dealing with serious economic issues. Economic growth has been slowing since 2018 but the pandemic sent it for the first time ever into contraction: this month, the country recorded negative growth of minus 0.38.

“Pakistan is officially in a recession,” said Haroon Sharif, a former economic adviser who still counsels the prime minister on economic issues.

The number of people living in poverty has risen to 40 percent from 30 percent since the pandemic began. Massive job losses could spark unrest, Sharif warned.

Sharif said the Pakistani prime minister’s focus is on helping the poorest, while his Cabinet ministers — many of whom are wealthy industrialists and landowners — focus on the elite. Ignored in government help schemes are middle-income earners and small businesses that employ 15 people or less, said Sharif.

“I know examples of teachers who are selling fruit,” said Sharif.

Image: FILE – In this Jan. 6, 2020 file photo, rescue workers and family members carry the casket of Khursheed Bibi, who died due to coronavirus, for her burial at a cemetery in Hyderabad, Pakistan. Pakistan ranks among countries hardest hit by the coronavirus with infections soaring beyond 18,000, while the government, which has opened up the country hoping to salvage a near collapsed economy, warns a stunning 1.2 million Pakistanis could be infected by the end of August. (AP Photo/Pervez Masih, File)