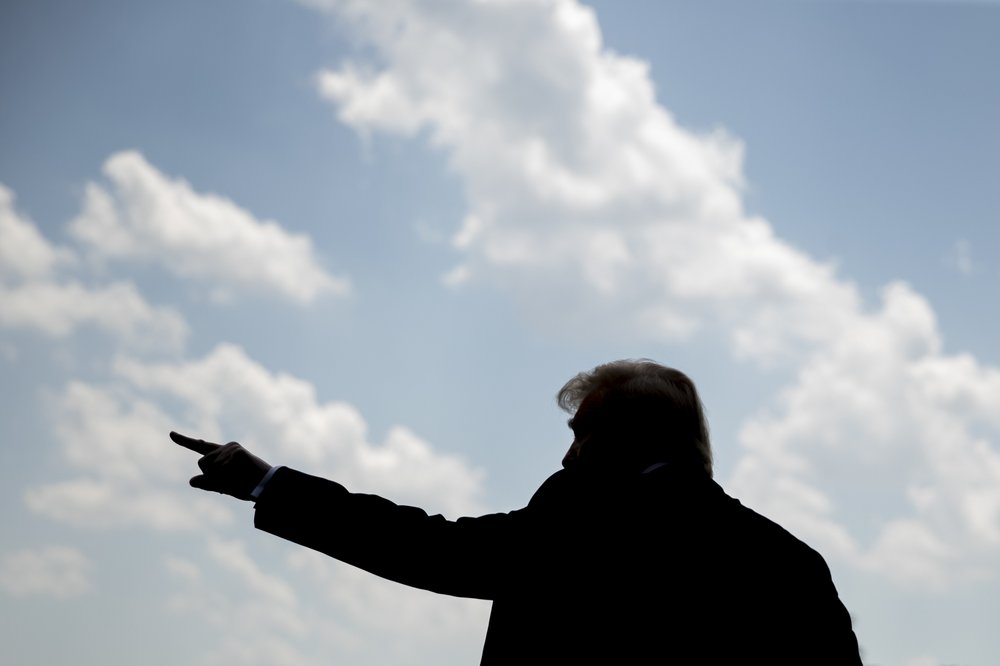 President Donald Trump is painting a dystopian portrait of what Joe Biden’s America might look like, asserting crime and chaos would ravage communities should the former vice president win the White House in November.

Left unsaid: A recent surge in violent crime in several American cities has happened on his watch.

“Irony is way down the list of things that President Trump worries about,” said Robert Spitzer, a political scientist at the State University of New York College at Cortland whose research focuses on gun politics and the American presidency. “He’s turning to the old playbook — appeal to the fears of Americans and then associate those fears with the Democratic Party, specifically Joe Biden.”

Trump’s attempt to cast Biden in that light follows a pattern seen throughout his presidency, where he attempts to shift responsibility, often to President Barack Obama, even more than three years after taking office.

With echoes of Richard Nixon’s law-and-order campaign in 1968, Trump is trying to energize his conservative base while also making an appeal to a small patch of undecided voters by posing the question: Which man will keep you safer?

By leaning hard on select scenes of violence, Trump is banking on that unrest continuing. But the protests could wane. Violent crime around the U.S. has been on a downward trajectory for the better part of the last three decades.

Lanae Erickson, a senior vice president for social policy and politics at the center-left think tank Third Way, said Trump’s attempt to use the Nixon playbook and tap into anxieties about crime is odd given that, unlike Nixon in 1968, Trump is already in the White House.

“Trump is the incumbent, so if bad things are happening right now, they get blamed on him,” Erickson said. “I don’t know how he can persuade voters that it’s Joe Biden’s fault.”

Trump has tried to paint Biden as captive of his party’s most liberal elements who have called to dramatically reshape policing in America.

His campaign has aired advertising in battleground states that shows a woman calling police for help as an intruder breaks into her home and getting a voice recording informing her that, because the police have been defunded, no one is available to take her call.

The president recently tweeted a warning to “Suburban Housewives of America” that “Biden will destroy your neighborhood and your American dream.”

“No one will be SAFE in Joe Biden’s America!” Trump declared.

Chicago, Los Angeles, Philadelphia and New York have seen spikes in violent crime and homicides this year. And Trump has dispatched federal agents or announced plans to send agents to Albuquerque, New Mexico, Chicago, and Kansas City, Missouri, to try to stop the unrest. He’s also sent federal agents to Portland, Oregon, to try to forcibly quell protests around the federal courthouse.

Trump has tried to argue that Biden, at least implicitly, would condone unchecked violence.

But Trump said he wouldn’t do it because of a lack of cooperation from the city’s leadership.

Mayor Lori Lightfoot said that Trump, despite his tough talk, has shown little interest in addressing a central issue driving the violence in the city: About 60% of firearms recovered in crimes committed in Chicago were originally purchased outside Illinois.

“We need you, as President, to take a leadership role in enacting meaningful and common-sense gun legislation, which you so far have refused to do,” Lightfoot, a Democrat, wrote in a letter to Trump last week.

At the center of Trump’s attempts to cast Biden as weak on crime is pushing the unfounded notion that Biden wants to defund the police.

In an interview with “Fox News Sunday” host Chris Wallace, Trump incorrectly cited a charter between Biden and Sen. Bernie Sanders, I-Vt., that was signed as part of the Unity Task Force, an effort to find common ground between the more moderate Biden backers and Sanders’ liberal supporters.

But the task force’s recommendations for the Democratic platform does not mention defunding police. Trump was unable to show Wallace language in the task force document that said as much.

Still, Trump campaign spokesperson Hogan Gidley hammered on the point during a Monday call to update grassroots activists on strategy.

“He has consistently been silent in the midst of communities devolving into lawlessness,” Gidley said of the former vice president. “The only time he does pop up out of his hidy-hole, he says we’re going to defund the police.”

Peter Scharf, a criminologist at Louisiana State University School of Public Health who has advised the New Orleans Police Department’s reform efforts, said Biden’s stance on policing is complicated and one that Trump will look to further muddy.

During the primary, fellow Democrats repeatedly criticized Biden over the bill. His criminal justice proposal reverses some key provisions of the crime bill. He has also apologized for supporting some policies in the 1990s that he now recognizes were harmful, such as sentencing disparities between crack and powder cocaine.

While Biden does not support defunding police departments, the push in some left-leaning big cities to drastically overhaul police budgets could put him in a difficult position, Scharf said. The majority of Seattle’s nonpartisan City Council, for example, has publicly embraced calls to cut the city’s 2021 police budget by half.

That makes it crucial that Biden become more proactive in laying out his vision for reinvention of the modern police force to prevent Trump’s anti-police jabs from sticking, Scharf added.

“You don’t want this to turn into your Willie Horton moment,” said Scharf, referring to George H.W. Bush’s 1988 campaign’s effort to tie Democratic Gov. Michael Dukakis to a convict who raped a woman during a weekend furlough. “If he’s not proactive, Trump could turn this into Biden’s Achilles’ heel.”

Image: FILE – In this July 27, 2020, file photo President Donald Trump waves as he walks towards Marine One on the South Lawn of the White House in Washington. Trump is painting a dystopian portrait of what Joe Biden’s America might look like, asserting crime and chaos would ravage communities should the former vice president win the White House in November. Left unmentioned by Trump is that a recent surge in violent crime recently endured in several big American cities has come under his watch. (AP Photo/Andrew Harnik, File)

Trump plays on fears in play for the suburbs

Trump not ready to commit to election results if he loses