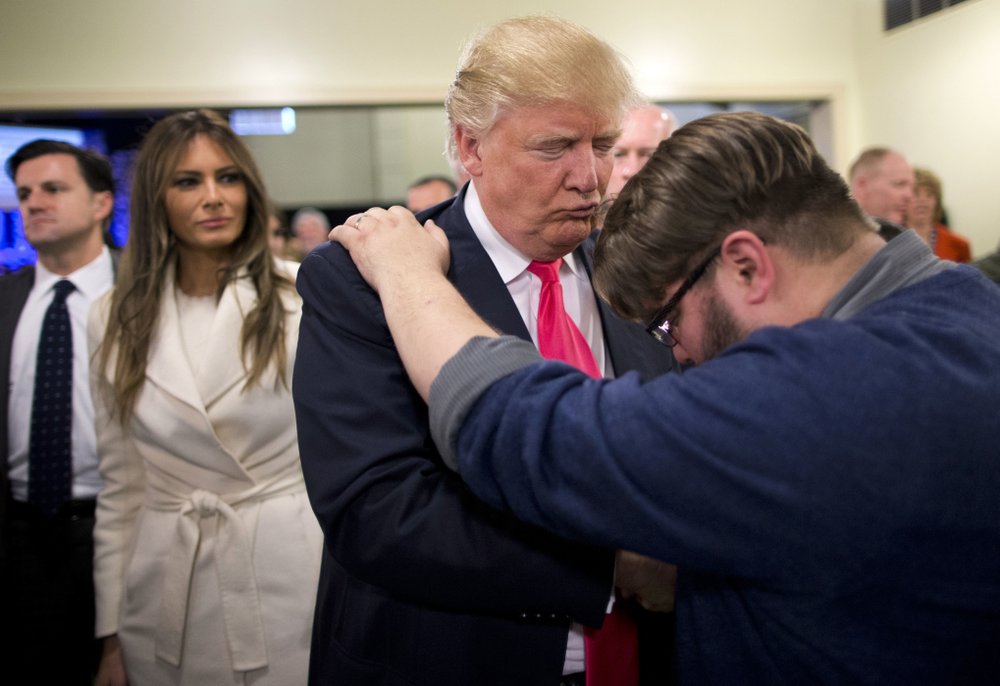 WEST PALM BEACH, Fla. (AP) — In his first campaign move of the 2020 election year, President Donald Trump on Friday will visit a mega-church in Miami to highlight his support among evangelicals as he aims to shore up and expand support from an influential piece of his political base.

The president will host the kickoff meeting of “Evangelicals for Trump” just days after he was the subject a scathing editorial in the Christianity Today magazine that called for his removal from office. But Trump’s campaign believes that his record in office, including the installation of two Supreme Court justices, will cement the votes of religious conservatives this year.

“I think his record in the past three years is rock-solid in things that the faith community cares about him,” said Jentezen Franklin, a pastor to a megachurch in Georgia. “We used to see politicians once every four years but this one is totally different in constantly reaching out to the faith community and we even get a chance to tell him when we disagree.”

Campaign officials said the Miami event was in the works well before the Christianity Today op-ed which raised fresh questions about the durability of his support among the conservative evangelicals who have proven to be a critical component of his political base.

The magazine’s editorial, written by editor-in-chief Mark Galli, envisions a message to those evangelical Christians who have remained stalwart Trump backers “in spite of his blackened moral record.”

“Remember who you are and whom you serve,” Galli’s editorial states. “Consider how your justification of Mr. Trump influences your witness to your Lord and Savior. Consider what an unbelieving world will say if you continue to brush off Mr. Trump’s immoral words and behavior in the cause of political expediency.”

The piece, which comes in a magazine founded by the late Rev. Billy Graham, was denounced by Trump, who tweeted “No president has done more for the evangelical community.”

Graham’s son, Franklin Graham, a major Trump supporters, also criticized his father’s former magazine. But most political observers doubt it will cause many evangelicals to desert Trump, who received more than 80 percent of their vote in 2016.

Still, the campaign is taking few chances, citing the president’s support for Israel, installation of federal judges and prison reform as way to further jolt evangelical turnout that could help them secure wins in states like Michigan, Florida, Pennsylvania, North Carolina and Georgia.

More than 5,000 people are expected to attend the event at the El Rey Jesús church. The kickoff of “Evangelicals for Trump,” which will be followed in the weeks ahead by the launches of “Catholics for Trump”” and “Jewish Voices for Trump,” also comes days after Trump and his wife went to an evangelical Christmas Eve service in West Palm Beach rather than the liberal Episcopalian church in which they were married and often attend holiday services.

Advisers believe that emphasizing religious issues may also provide inroads with Latino voters, who have largely steered clear of supporting the president. In particular, even a slight uptick with faith-focused Latinos could help Trump carry Florida and provide some needed breathing room in states like Texas.

“President Trump has appointed well over 180 solid, conservative federal judges, including two exemplary Supreme Court justices. He has defended religious freedoms and has stood as the most pro-life president we’ve ever had,” said campaign press secretary Kayleigh McEnany. “Evangelicals for Trump will engage the Christian community nationwide to overwhelming re-elect President Trump in 2020.”

The event comes just day after a new poll revealed that white evangelical Protestants stand noticeably apart from other religious people on how the government should act on two of the most politically divisive issues at play in the 2020 presidential election.

A similar divide emerged over whether the government should bar discrimination against people who are lesbian, gay, bisexual or transgender in workplaces, housing or schools. About 6 in 10 Catholics, white mainline Protestants and nonwhite Protestants supported those protections, compared with about a third of white evangelical Protestants.

White evangelicals were also more likely than members of other faiths to say religion should have at least some influence on policy-making.

Rev. Franklin Graham pointed to Trump’s record on abortion as a key driver of the president’s support from his religious community.

“I don’t think evangelicals are united on every position the president takes or says, but they do recognize he is the most pro-life-friendly president in modern history,” Graham said in a recent interview. “He has appointed conservative judges that will affect my children and grandchildren’s lives, long after he’s gone.”

But Democrats have shown strong interest in connecting with voters of faith, even evangelicals whom Trump is often assumed to have locked down. And some religious leaders believe people of faith may be turned off by Trump’s personal conduct or record.

“Friday’s rally is Trump’s desperate response to the realization that he is losing his primary voting bloc — faith voters. He knows he needs every last vote if he wants a shot at re-election, as losing just 5% of the faith voters ends his chances,” Pastor Doug Pagitt, the executive director of Vote Common Good. “In addition, he is trying to use this part of his base to give cover for his broken promises and immoral policies.”

Image: In this Jan. 31, 2016, file photo, Pastor Joshua Nink, right, prays for then Republican presidential candidate Donald Trump, as his wife, Melania, left, watches after a Sunday service at First Christian Church, in Council Bluffs, Iowa. In his first campaign move of the 2020 election year, President Donald Trump on Friday will launch a coalition of evangelicals as he aims to shore up and expand support from an influential piece of his political base. (AP Photo/Jae C. Hong, File)

Bring on 2020: Some Democrats end year with campaign events

Three years in, no sign of Trump’s replacement for Obamacare