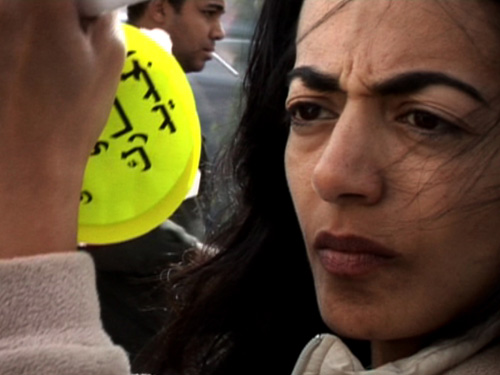 Sometimes certain questions are asked over and over again, because the answers they provoke are never satisfying. In Cairo since 25 January, in the midst of everything else, one such persistent question has arisen: how is art responding to the ouster of Hosni Mubarak and the transformative forces playing out in the country today? Attempts to understand this have been made continually over the past year in the form of news articles, blog posts, op-eds, art exhibitions and now two new documentaries, “Laila, Hala and Karima,” codirected by Egyptian, Switzerland-based director Ahmed Abdel Mohsen and the German Eduard Erne, and “The Noise of Cairo,” directed by German director Heiko Lange.

Bidoun editor Negar Azimi wrote in a piece about “Revolution Art” in Frieze some months ago: “Whatever you think of these platforms and initiatives – and it may very well not be much – they can’t help but leave you lingering over the sort of questions they raise and, indeed, wondering whether too much is being asked of art in times of revolution.”

With each new film, exhibition and piece of writing about art and the revolution, this question rings in the background. What is being asked of art and why? Perhaps the strength of these two recent contributions to the conversation is in the fact that the directors do not ask so much of art itself, but focus rather on the artists, who are in the end simply people, and examine how they position themselves in a changing context.

“Laila, Hala and Karima,” follows theater director Laila Soleiman, visual artist Hala ElKoussy, and dancer and choreographer Karima Mansour, as they navigate the ups and downs of the past year in Cairo. Over the course of the film we see how what began in January 2011 gradually settled into a kind of stable instability. The balance shifts in the three women’s lives as they begin to get back to their work as artists, leaving the life of constant activism behind. But Soleiman, ElKoussy and Mansour articulate contrasting understandings of the relationship between their work and their politics.

Of the three, Soleiman was the first to make work responding directly to current events. Soleiman says that she feels one must “Fight with whatever weapon you have,” which, for a playwright whose first post-January 25th uprising piece was entitled “No Time for Art,” belies a particular disinterest, at least in the context of Egypt in 2011, in art that is not meant specifically to be an instrument of activism.

But for Mansour, a dancer whose work deals with the female body in a way that is not always readily accepted in Egypt, her relationship with politics is more one of navigation than confrontation. “I don’t like to mix art with politics,” says Mansour, “but it is difficult to separate politics in a country like this.” The nature of her work makes it inherently political and often problematic, and 25 January made it possible for Mansour to work in her home country for the first time in seven years.

While it is an effective strategy to examine the last year through personal stories, these three women represent a limited segment of Egyptian society. At one point in the film, activist Salma Said, on a break from rehearsing for one of Soleiman’s plays, points out, “The celebrities of the revolution are all middle class, English-speaking, not veiled girls who use Facebook and Twitter. And it is a shame because the turning point was when other people took part.”

In the context of a film about three middle class, English-speaking, not veiled girls who use Facebook and Twitter, it is an important point to keep in mind.

As a record of artists’ reactions to revolution, “The Noise of Cairo” draws a broader picture than “Laila, Hala and Karima,” despite being filmed over the course of only ten days in the middle of the summer, 2011. The artists interviewed in the film work in a wide range of fields, and are at varying points in their careers. As a group, they portray a great amount of energy and optimism that exists alongside a strong awareness of the fact that what is “new” about Egypt after 25 January is still unclear and still changing. 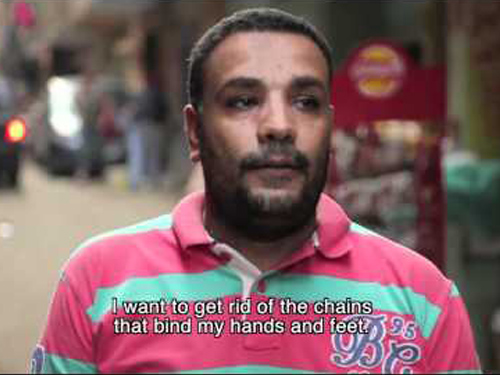 The film captures a specific moment, and it is encouraging to see the energy that was coursing through the arts almost a year ago. In exhibitions, in performances, and in the personal practices of artists like Hany Rashed and Khaled Hafez, there is a buzzing sense of excitement and openness. While not a single person in the film declares a finished victory for the revolution, all seem assured in the power of their own voices, and aware of a nascent, but tangible potential for long-lasting change.

Painter Khaled Hafez describes a shift that was likely felt by many artists like himself – and like Karima Mansour – who long ago decided professional success and fulfillment lay abroad, where neither resources nor censorship are issues in the way that they are in Egypt.

“I enjoyed being a citizen for the first time in my life at 48,” says Hafez.

But perhaps because of its buoyant tone, the film already feels somewhat dated. As power changes hands, conversations about censorship have shifted from discussions of what is possible now that was not possible before, to what is possible now that may not be possible in the future, depending on what happens in upcoming elections and after. It is hard to know how those interviewed in June would respond to the same questions today.

Near the end of “The Noise of Cairo,” Mansour, who is featured in both films, says, “Artists are feared by the government because they are loud, and they make a lot of noise.”

But as visitors filed out of Rawabet Theater, the most distinct noise being made by anyone was the distant chant of Hazem Salah Abu Ismael supporters, wafting over from Tahrir Square only a half kilometer away. It served as a reminder that within this vast city, there are many currents existing side by side, and many people who hope for different, and often conflicting things.

Asked why he chose to focus on artists in his documentary, Lange responded, “I think artists start to reflect early on social issues… it is interesting to see what comes out of confusion.”

And in these two films, artists are asked simply to be thoughtful and reflective humans, and to begin to articulate what revolution in Egypt actually means, and what might come out of this confusion.