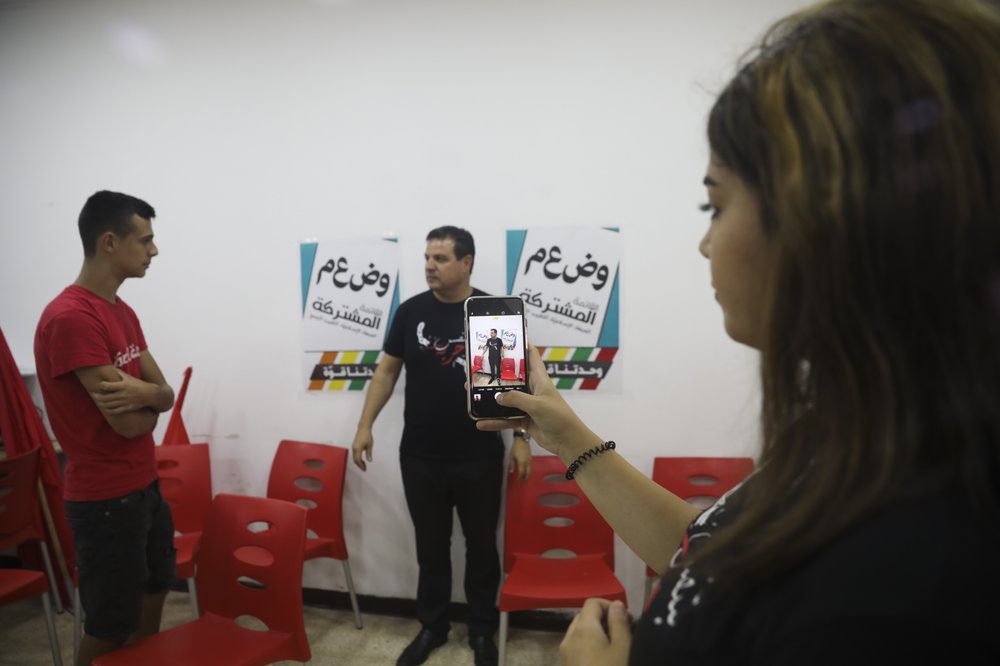 JERUSALEM (AP) — The leader of the main Arab faction in parliament has shaken up Israel’s election campaign by offering to sit in a moderate coalition government — a development that would end decades of Arab political marginalization and could potentially bring down Prime Minister Benjamin Netanyahu.

Ayman Odeh’s offer to back Netanyahu’s chief opponent, Blue and White chairman Benny Gantz, for prime minister reflects the growing desire of Israel’s large Arab minority to take a more active role in shaping the country. It also challenges the longstanding norm that Arabs are out of bounds as political partners with the Jewish majority.

If Odeh can generate excitement and boost Arab turnout, it could be enough to tip the scales in Israel’s fractured political landscape and finally topple Netanyahu, who has long incited against Arab political leaders and questioned their loyalty.

“The truth is we could be the real deciding factor in this election,” Odeh told The Associated Press this week. “Without us the right-wing government will not be replaced. We can’t do it alone, but without us it can’t be done.”

Netanyahu forced the Sept. 17 election after failing to put together a ruling majority after April elections. It is the first time Israel has held two elections in the same year and has many parties, including Odeh’s, scrambling to avoid their mistakes of the April vote.

Whether the repeat election becomes a watershed moment for Israel’s Arabs depends largely on the response to Odeh’s historic call for inclusion.

Israeli Arabs, who make up about 20 percent of the country’s 9 million citizens, have largely been marginalized politically since the founding of the state in 1948.

The Jewish establishment, leery of including those it perceived as identifying with the country’s adversaries, kept Arab-led parties out of government. At the same time, Arab leaders said they had no interest in joining a government for fear of legitimizing Israel’s military occupation of Palestinian areas or being seen as condoning military operations against Palestinians.

But with a younger generation far more comfortable with a dual Israeli-Arab identity and demanding solutions to everyday domestic issues, the political calculus has changed.

Polls show an overwhelming majority of Arab citizens want their leaders to focus more on reducing crime, improving education and addressing a housing crunch rather than solving the Israeli-Palestinian conflict.

“The message is we don’t just want you to get elected, we want you to influence,” said Thabet Abu Rass, co-director of the Abraham Fund Initiatives, a non-profit dedicated to promoting equality in Israel. “The Arabs haven’t stopped supporting the Palestinians, but they know that peace will take time. The other issues are more urgent.”

Israel’s Arab citizens, in contrast to their Palestinian brethren in the West Bank and Gaza, can vote in Israeli elections but have suffered from decades of discrimination and second-class status. This has often translated into apathy at the ballot box.

Angered by the passage of a controversial law that defined Israel as the nation-state of the Jewish people, and by Netanyahu campaign tactics they considered racist, many of Israel’s Arab minority sat out the April elections. Turnout fell to 49%, from 64% in the previous 2015 election.

The low turnout, as well as divisions between the various Arab parties, contributed to a poor showing. Arab parties won just 10 seats in the 120-seat parliament, down from 13 in 2015.

With the four main factions now reunited under Odeh’s leadership, polls project the Joint List becoming the third-largest party after the election.

A grassroots effort is trying to mobilize Arab voters and create optimism that they can tip the election. Odeh himself said if Arab turnout reaches 65 percent, Netanyahu will be unseated.

Odeh, who cited Martin Luther King. Jr. and Nelson Mandela as inspiration, said he also sees an increased openness among Jews to his appeal. A recent survey also showed that his outreach enjoyed widespread popularity with the Arab public. An Arab party has never sat in an Israeli government, though major Jewish parties have had high-ranking Arab members.

“I don’t want to wait until there is a change for me to start influencing. I want to be part of that process,” he said. “The Arabs in Israel want peace and equality. They want pragmatic and influential leadership to implement these principles.”

Plenty of obstacles still stand in his path.

Reviving old tactics, Netanyahu has been seeking to galvanize his right-wing base by painting the Arab minority as disloyal and even treasonous. In 2015, he famously tried to mobilize supporters on election day by warning that Arab voters were heading “in droves” to the polls.

Despite its tepid preliminary response to Odeh, Blue and White seems to realize the potential of the Arab vote and has begun campaigning in Arab communities. Gantz has also included Odeh in opposition protests and made other gestures.

Still, if tapped to be the next prime minister, Gantz is expected to first turn to other Jewish parties and perhaps even Likud to form a national unity government, making Arab inclusion a long shot.

Odeh says it is more likely that he will become the country’s next opposition leader, an official state position that would grant him an audience with visiting dignitaries, a state-funded bodyguard, monthly consultations with the prime minister and a platform to rebut his speeches in parliament.

Other Arab lawmakers have indicated they would still refuse to serve as ministers but would welcome the opportunity to head powerful coalition-led parliamentary committees that oversee budgets crucial to their sector’s interests.

Regardless of the election results, Arab political attitudes have changed, said political activist Afif Abu Much, a computer engineer.

“Today’s Arabs want to be an integral, legitimate part of Israeli politics,” he said.

Photo: In this Thursday, Aug. 29, 2019 photo, an activist takes a photo of Ayman Odeh, the leader of the Arab Joint List parties, during a campaign meeting in Nazareth, Israel. Odeh has shaken up Israel’s election campaign by offering to sit in a moderate coalition government _ a development that would upend decades of convention that has relegated Arab parties to the sidelines and could bring down Prime Minister Benjamin Netanyahu. (AP Photo/Mahmoud Illean)

Israel bans cameras at Arab polling stations in next vote