A number of Arab World leaders have begun taking extraordinary measures in an attempt to avoid widespread public protests like those seen over the past month in Tunisia, which led to the overthrow of Tunisian President Zine al-Abidine Ben Ali.

Kuwait’s Amir Sheikh Sabah al-Ahmad al-Sabah issued an order that every Kuwaiti citizen be granted KD1000 (US$3599), totaling US$4 billion, as well as free basic foodstuffs for citizens carrying a ration card until the end of March 2012.

The grants marked the occasion of the country’s 50th independence anniversary, 20th liberation anniversary and next month’s 5th anniversary of Sheikh Sabah's assumption of office.

Saudi King Abdullah bin Abdel Aziz vowed to increase his country’s budget to achieve prosperity for the Saudi people. He called on the citizens to have patience, saying the objective was to “take care of any failures we were unaware of in the past.”

In Jordan, 11 MPs signed a petition calling for the government to resign and accused it of failing to deal with deteriorating economic conditions following a protest in which hundreds of citizens demanded better living conditions.

In Sudan, opposition parties threatened to organize a “public uprising” to topple the ruling regime. The opposition also demanded that recent price hikes be cancelled, for the Minister of Finance to step down and for parliament to be dissolved.

Meanwhile, recent events in Tunisia echoed across the Arab world, with citizens in a number of Arab countries setting fire to themselves, including one Mauritanian man, in an act similar to that which triggered the uprising in Tunisia. Just hours before the man set himself on fire in protest of the political situation in the country, the Mauritanian government announced it was taking urgent measures to combat rising prices.

On Monday, an Egyptian also protested by lighting himself on fire in front the Egypt’s parliament building.  He was transported to the hospital after security used fire extinguishers to put out the flame. 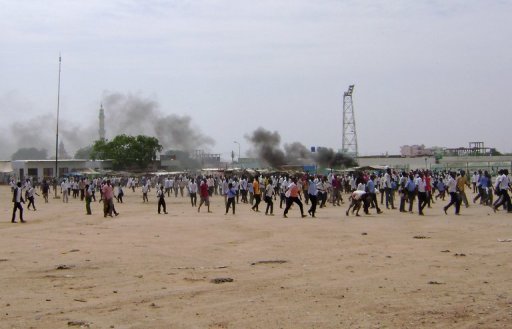 Fourteen killed in clashes in displacement camp in Sudan’s Darfur