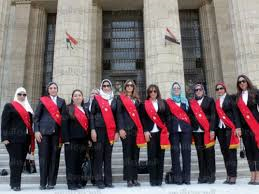 Egypt’s State Council President Ahmed Abou Al-Azm said there was no constitutional prohibition to appointing women as judges in the State Council, adding that the State Council itself has no objection to the matter. However, he said the entire process was a “matter of time”, as there are protocols that have to be followed to appoint women as state council judges, some of which include vacating suitable positions for women.

During a speech he gave at the International Conference of the Arab Union of Administrative Judiciary, Abou Al-Azm added that, at that point, Egypt is content with the number of female ministers in the current government, which is evidence that Egypt is keen on women participating in different fields.

On a similar note, ex-Minister of Communications Maged Othman said that giving the chance for women to have access to all leadership positions has become a priority of utmost importance, as it is a basic right for women.

Women have also been taking positive steps in being an integral part of the judiciary system. In 2015, Egypt swore in 26 new female judges, the largest number to be sworn in since 2007, bringing the total number of female judges in the country to 80. In August 2018, 16 female Egyptian judges were promoted to higher judiciary positions.