PARIS (AP) — Human rights activists in France have urged the country’s soccer officials to pay attention to rights violations of migrant workers in Qatar a year before the World Cup.

“Thousands have died in Qatar and the soccer federation has not said a word,” the banner reads.

Lola Schulmann, an advocacy officer with Amnesty in Paris, said the group has repeatedly asked soccer officials for a meeting to discuss the issue of human rights violations of migrant laborers who have worked in Qatar to build World Cup stadiums and other infrastructure for the tournament, which starts in November 2022.

“Unfortunately, we have no response from the federation,” Schulmann said.

Schulmann said there are 2 million migrant workers in Qatar and “every day they see their rights violated.” She added that the banner “is our message to the national federation that we care about their rights.”

Qatar has refused criticism of its labor laws and practices and World Cup organizers have repeatedly said they have been unfairly scrutinized despite overhauling their legislation.

In a report released last month, Amnesty said Qatar has not delivered on the promise it made to the International Labor Organization in 2017 to end the migrant workers’ abuse and exploitation. Workers across the country are still “left at the mercy of unscrupulous employers, facing wage theft, unsafe working conditions,” the report said.

Workers are still prohibited from forming unions to collectively fight for their rights while justice evades them and compensation for abuse remains scarce, allowing employers to exploit their workforce with impunity, Amnesty said in its latest report on the World Cup in the Gulf country. 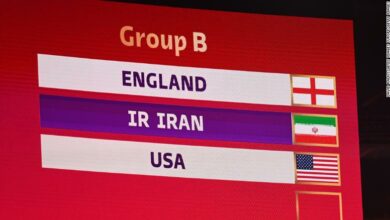 Geopolitical foes Iran and US to clash again at World Cup