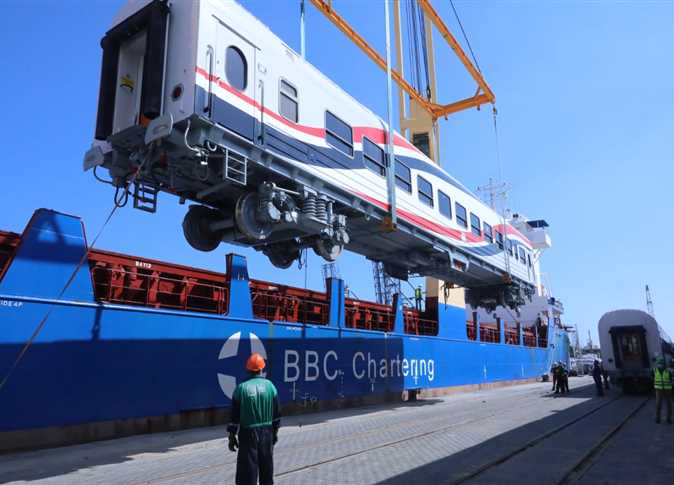 The Alexandria port on Wednesday received 22 train vehicles as part of a 1.16 billion euro deal signed between the Egyptian National Railways (ENR) and the Hungarian-Russian Transmashholding company, the largest deal in the ENR’s history, Minister of Transport Kamel al-Wazir announced.

The deal aims to manufacture and import up to 1,300 vehicles, Wazir added, and said a second batch is due for the first week of July and includes train vehicles to be imported from Saint Petersburg to Alexandria port.

The remaining vehicles, at a rate of 35 per batch, will be imported according to a specified schedule.

Egypt signed a contract back in 2018 with the Russian-Hungarian Transmashholding Company to supply 1,300 train coaches to the ENR.

The largest deal in the ENR’s history, it represents a qualitative shift in the services provided to passengers in Egypt.

Egypt’s government aims to overhaul railway facilities though the periodic updating of infrastructure and coaches, focusing on safety and aiming to utilize unconventional methods to provide further resources to implement developmental plans.

The company implemented anti-coronavirus measures on the container’s crew in line with the precautionary regulations from the Alexandria port to sterilize the vehicles, piers, and marine units.