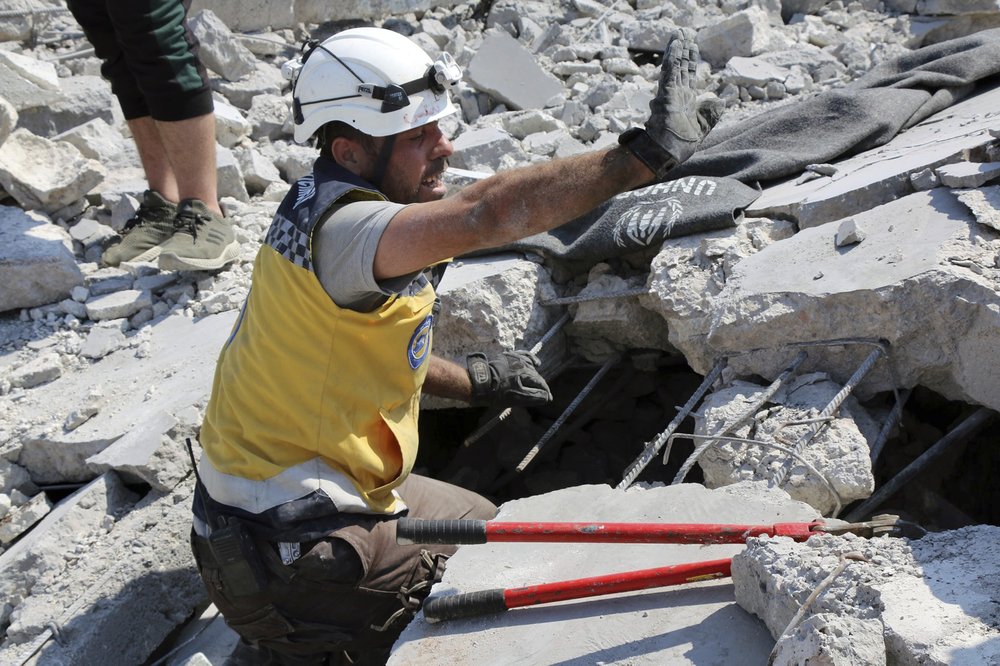 BEIRUT (AP) — Government and Russian airstrikes pounded the southern edge of a rebel stronghold in Syria’s northwest on Saturday, killing at least seven members of one family, activists and a war monitor reported.

The intense airstrikes were coupled with fierce ground clashes as the government, backed by Russia, pushed ahead with a months-old offensive seeking to chip away at territory on the periphery of the rebel enclave.

Idlib and surrounding areas are home to 3 million civilians and is dominated by Islamist insurgents.

The Britain-based Syrian Observatory for Human Rights said a woman and her six children were killed in an airstrike that hit their home in the village of Deir al-Sharqi in southern Idlib. Rami Abdurrahman, the head of the Observatory, said the children were all under 18 years old. Their father survived because he was not home at the time of the airstrike.

The activist-operated Thiqa news agency also reported the casualties and showed images of rescuers attempting to extricate the body of a young boy trapped under the rubble.

Syria’s Civil Defense, a volunteer rescue group also known as the White Helmets, said the village of Deir al-Sharqi was hit with four airstrikes that resulted in the killing of the Hammoud family.

A volunteer from the group, which operates in opposition areas, said the intense airstrikes hit a main highway in southern Idlib, and that a rescue team came under attack as they were putting out a fire caused by one of the strikes.

Thiqa said the barrage of airstrikes sparked a new wave of displacement inside the enclave. Residents have been moving toward safer areas near the border with Turkey.

Overnight airstrikes in the town of Hass hit a gathering of civilians who had escaped the violence further south, killing at least 13, also including children.

The United Nations has been calling for respecting the lives of civilians as well as medical and humanitarian workers, saying that the death toll is “rising every day.”

In the past 3 1/2 months, the UN documented 500 civilian deaths and said 42 attacks on health care facilities were reported. The UN said a paramedic and an ambulance driver were killed in airstrikes Wednesday.

The Idlib stronghold sits on the Turkish border and is surrounded by government and Turkish-controlled areas. Already more than 450,000 people have been displaced inside the rebel-controlled area by the fighting, which began April 30.

Syrian troops, backed by Russia, have intensified their military push in recent days, advancing into the territory and gaining control of a number of villages on the southern edge.

An officer from the Syrian elite army units known as the Tiger Forces told the state-run al-Ikhbariya TV that recent government troops advances aim to “choke the armed groups” in Khan Sheikhoun, Kfar Zita and Latamneh, all the way to the Aleppo-Damascus highway, which runs through the rebel-held territory.

Regaining access to the highway is one of the government’s immediate military objectives.

The Tiger Forces, led by prominent commander Suheil al-Hassan, have been key in achieving a string of battlefield wins for the Syrian government, including securing military supply lines in the north after they were cut off by the insurgents and breaking the siege of a military base. Some Tiger units have reportedly received training by Russian military advisers.

Image: This photo provided by the Syrian Civil Defense White Helmets, which has been authenticated based on its contents and other AP reporting, shows a Civil Defense worker searching for victims from under the rubble of a destroyed building that hit by airstrikes, in Deir al-Sharqi village, in Idlib province, Syria, Saturday, Aug 17, 2019. Syrian activists and a war monitor say airstrikes have pounded the southern edge of a rebel stronghold in the country’s northwest, in one instance killing seven including children. (Syrian Civil Defense White Helmets via AP)