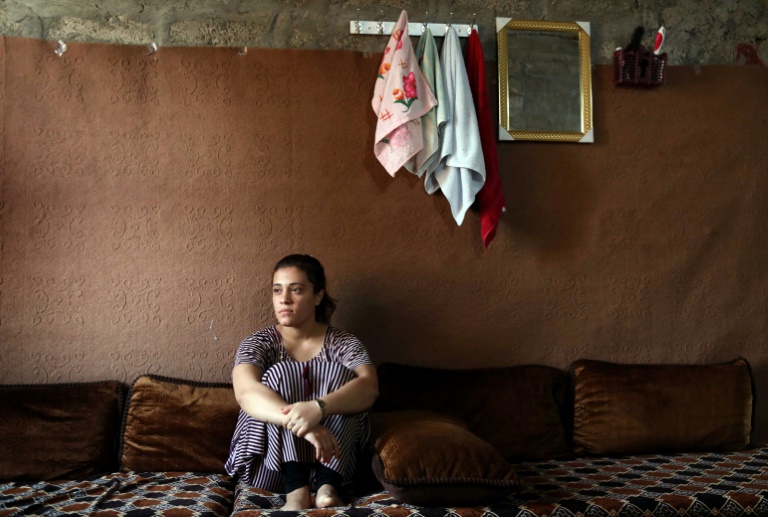 Freed after years in jihadist captivity, Jihan faced an agonizing ultimatum: abandon her three small children fathered by an Islamic State fighter or risk being shunned by her community.

“How could I, when my three siblings are still in IS hands?,” she added, highlighting the harsh reality that the children serve as constant reminders of the brutalities inflicted on the closed, tight-knit Yazidi community by the so-called Islamic State group.

Dozens of Yazidi women and girls systematically raped, sold and married off to jihadi after being abducted by IS from their ancestral Iraqi home of Sinjar in 2014 have faced the same gut-wrenching dilemma. What to do about the children born of these forced unions?

Now freed, the women are desperate to heal from the wounds inflicted on the conservative minority — but raising jihadi offspring would make closure impossible, they said.

Kidnapped at 13, Jihan was forced to marry a Tunisian IS fighter at 15 and then fled with him and their children from IS’s bombarded Syrian holdout of Baghouz four months ago.

When US-backed forces learned she was Yazidi, they whisked her and her two-year-old boy, year-old girl and four-month-old infant to a northeast Syria shelter hosting other mothers from the brutalised minority.

The safehouse, known as the Yazidi House, circulated her photograph on Facebook and her older brother Saman, still in northern Iraq, recognized his long-lost sister.

He wanted her home. But without the children.

After days of an anguished back-and-forth, Jihan decided she would leave her infants with Syrian Kurdish authorities in exchange for what she said was her real family.

“They were so young. They were attached to me and I to them… but they’re Daesh children,” she murmured.

She said she doesn’t have any pictures of her children and doesn’t want to remember them.

“The first day is hard, and then little by little, we forget them,” she said.

‘No one asks about them’

For centuries, Yazidis who married outside the sect — even against their will — were ex-communicated.

Girls forcefully taken by IS in 2014 risked suffering the same fate, but a landmark decree by Yazidi spiritual leader Baba Sheikh said survivors of IS’s sexual abuse should be honoured by the community.

That compassion however has not been extended to their children.

In April, the Yazidis’ Higher Spiritual Council issued an ambiguous decree welcoming “children of survivors,” sparking hope of a second reformation to accept those born of a Yazidi mother and IS father.

But a ferocious backlash from conservative Yazidis prompted the Council to clarify that nothing had changed: it would only welcome children born to two Yazidi parents.

Any further reform was seen as a threat, opening the floodgates of change to a traumatized community, said Yazidi activist Talal Murad.

“If there’s this kind of change in the creed, other things could change too — there will be a breakdown, a total collapse of the Yazidi religion,” said Murad, who also heads Ezidi24, an outlet covering Yazidi affairs.

“First, according to Iraqi law, any child with a missing father will be registered as a Muslim, automatically,” said Kheder in the Council’s headquarters in Sheikhan.

Islamic law, on which the Iraqi constitution is based, stipulates that religion is inherited from the father.

Psychologically too, Kheder said the Yazidi society remained too scarred by the prolonged abduction of their own people to accept raising the children of their abusers.

“Until now, we have thousands of Yazidi women and girls in IS hands. No one asks about them. They ask about a few children that can be counted on one hand,” said Kheder.

The Council said it does not keep statistics on returning Yazidi survivors with infants born of rape.

While most Yazidi mothers leave their children at the Yazidi House in Syria, some brought IS-born infants home to Iraq. They declined interviews because of the subject’s sensitivity.

One woman insisted to her Yazidi family that she would raise her year-old infant fathered by a missing IS fighter, but balked when she discovered she could not acquire Iraqi identification papers for him as his father was not present.

She gave him up for adoption, her doctor said.

Another 18-year-old arrived in Iraq in the spring after finally being freed, but was heavily pregnant by her IS captor, according to a social worker involved in her case.

She spent weeks in a safehouse without her family’s knowledge until she gave birth, sent the newborn away and joined her relatives in a displacement camp.

Last year, five children born to Yazidi mothers and IS fathers were left at an orphanage in Mosul, which helped local Muslim families adopt them, according to Mosul’s director of women and children’s issues Sukaynah Younes.

They are now registered as Muslim.

The psychological impact of this separation will likely be long-lasting. Jihan herself still seemed torn.

Weeks ago, she had described her children to a social worker as her “flesh and blood,” saying she missed them.

While she sounded more detached when speaking to AFP, a shy smile crossed her face as she remembered them. When she was out of her brother’s earshot, she cried quietly.

“If it was up to me, I would have brought them,” she said.

‘The genocide goes on’

Yazidis believe the events of 2014 were the 74th “genocide” suffered by the minority in its 4,000-year history, and that it has not ended.

The most painful wound is that hundreds of men, women, and children remain missing, despite hopes they would be found after IS’s “caliphate” collapsed in March.

Some 100,000, nearly a fifth of the pre-war community, have been resettled abroad and another 360,000 remain displaced in Iraq with their villages lying in ruins.

“The genocide is ongoing. People can’t go home to Sinjar, we still have women and girls missing, everyone is looking to leave to Europe,” said Kheder.

Baba Shawish, a cleric and custodian of the Yazidis’ holiest site at Lalish, blamed Baghdad.

“The federal government in Baghdad knows very well that thousands of Yazidis remain captive, but it has not decided to arrest the kidnappers. It’s not cooperating with us.”

A bill introduced in April by Iraq’s president proposes reparations for Yazidis and a way to determine children’s legal status, but parliament has yet to debate it.

Gripped by such pressing issues, Yazidis expressed frustration with what they saw as misplaced global pressure to enact religious reform and welcome children born of IS.

The best option, community figures said almost unanimously, was for Yazidi mothers to be resettled abroad.

“It’s a very complicated issue, and the most appropriate solution right now can be found outside Iraq,” said Vian Dakheel, a Yazidi and former parliamentarian.

“In my view, it’s for these women to go to Europe with their children.”

Dr. Nagham Hasan, an obstetrician-gynecologist who has worked extensively with Yazidi survivors since 2014, said patients with young children had all but given up on Iraq.

“I’ve been warning that we would be dealing with the issue of mothers for years,” she said.

“Everyone wants to leave. The Yazidi community is broken.”

Image: AFP / SAFIN HAMED Yazidi teenager Jihan Qassem faced an impossible choice after being freed from years as a hostage of the Islamic State group, abandon her three young children fathered by a jihadist fighter or risk being ostracised by her community

Yazidi women seek acceptance for children born of IS rape