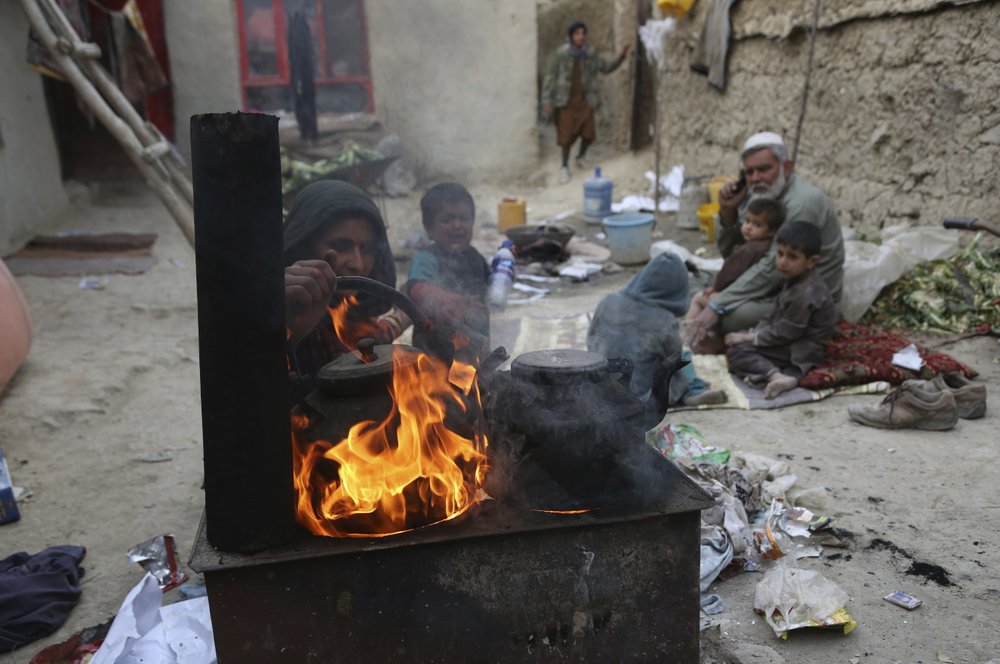 KABUL, Afghanistan (AP) — Yousuf fled with his family from his home in eastern Afghanistan eight years ago to escape the war, but he couldn’t escape tragedy. In the capital, Kabul, five of his children died, not from violence or bombings, but from air pollution, worsened by bitter cold and poverty.

At the camp for displaced people they live in, they and other families keep warm and cook by burning the garbage that surrounds them. One by one over the years, each of the children got chest infections and other maladies from the pollution and never made it to age seven, he told The Associated Press. The 60-year-old has nine surviving children.

“We didn’t have enough money for the doctor and medicine … I can barely feed my children,” said Yousuf, who works as a porter in a vegetable market earning barely a dollar a day. Like many Afghans he uses only one name.

Afghanistan’s pollution may be even deadlier than its war, now 18 years long.

There are no official statistics on how many Afghans die of pollution-related illnesses, but the research group State of Global Air said more than 26,000 deaths could be attributed to it in 2017. In contrast, 3,483 civilians were killed that year in the Afghan war, according to the United Nations.

Kabul, a city of some six million, has become one of the most polluted cities in the world — ranking in the top of the list among other polluted capitals such as India’s New Delhi or China’s Beijing. Decades of war have wrecked the city’s infrastructure and caused waves of displaced people.

On most days, a pall of smog and smoke lies over the city. Old vehicles pump toxins into the air, as do electrical generators using poor quality fuel. Coal, garbage, plastic and rubber are burned by poor people at home, as well as at the many brick kilns, public baths and bakeries. Many apartment buildings have no proper sanitation system, and garbage is piled on roadsides and sidewalks.

The large majority of victims are poisoned by the air in their own homes, as families burn whatever they can to keep warm in Kabul’s winters, with frequent sub-zero temperatures and snow. Children and elderly are particularly vulnerable. At least 19,400 of the 2017 deaths were attributable to household pollution, which also contributed to a loss of two years and two months of life expectancy at birth, according to the State of Global Air survey.

Yousuf’s camp, home to more than a hundred families, has no proper water or sanitation system and is surrounded by garbage dumps. His and other families’ children search through the garbage for paper, cloth, sticks or plastic, anything that can be burned for fuel.

“We are so poor, and we have lots of problems, we don’t have enough money for medicine, wood or coal for heating, so this is our life, my children collect garbage from dump yards and we use it for cooking and heating to keep the kids warm,” he added.

Decades of war have worsened the damage to Afghanistan’s environment and have made it a huge challenge to address them. Environmental issues are far down the list of priorities for a government struggling with basic security issues, rampant corruption and a plunging economy.

Three or four decades ago, “it was a wish for people to come to Kabul and breath this air,” said Ezatullah Sediqi, deputy director for the National Environmental Protection Agency. But in the wars since, “we lost all our urban infrastructure for water, electricity, public transportation, green areas, all these things,” he said.

Authorities warn that this winter is expected to be colder than usual and fear that will only increase the use of pollution-creating fuels to keep warm. The Kabul municipality has also called on residents to stop burning garbage for heat and instead use fuel.

“If everyone follows the instructions laid out by Kabul Municipality, the pollution could be controlled,” the municipality’s spokeswoman, Nargis Mohmand, said. But if not, “then we might live with this untreatable wound for years to come.”

But fuel is either too expensive or not available for many in Kabul. Electrical heaters are too pricey for most, and power outages are frequent.

Doctors at Kabul’s Indira Gandhi Children’s Hospital say they’ve seen the numbers of patients with pollution-related illnesses increase, though they could not give exact figures. In the winter, hundreds of children a day sometimes come in, suffering from respiratory illnesses, according to hospital officials.

Dr. Saifullah Abassin, a specialist trainer at the hospital, said his ward has a capacity of 10 patients but often has three times that number.

The government has launched an environmental awareness campaign. Ads on TV, programs at schools and universities and sermons at mosques talk about pollution’s harm to society and tell listeners about steps to reduce it.

But there are steps the state needs to take, like encouraging the planting of trees and creating green spaces, as well as implementing a city master plan to stop unplanned development around the capital, often a source of pollution because of their lack of services.

Sediqi, of the NEPA, said that ever since the first post-Taliban government was created in 2001, there was no planning on urban infrastructure, which left individuals to build on their own.

“Unfortunately, that led to unplanned development,” he said. “So now we have numerous urban problems and challenges and organizational challenges, which is causing the environmental pollution.”

Image: In this Oct. 29, 2019 photo, Yousuf, who fled with his family from his home in eastern Afghanistan eight years ago to escape the war, sits with children while his wife burns plastic as she makes tea, in Kabul, Afghanistan. In the capital, Kabul, five of his children died, not from violence or bombings, but from air pollution, worsened by bitter cold and poverty. (AP Photo/Rahmat Gul)