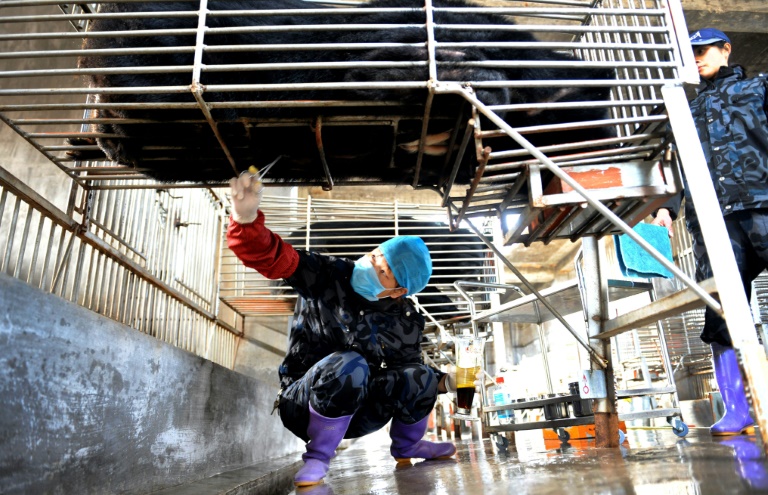 China has approved the use of bear bile to treat coronavirus patients, angering activists and raising fears it could undermine efforts to stop the illegal animal trade which is blamed for the emergence of the new disease sweeping the globe.

The move comes just weeks after China banned the sale of wild animals for food, citing the risk of diseases spreading from animals to humans.

But the National Health Commission in March issued guidelines recommending the use of “Tan Re Qing” –- an injection that contains bear bile powder, goat horn and three other medicinal herbs –- to treat critically ill coronavirus patients.

It is one of six traditional Chinese medicine products included in the directive.

President Xi Jinping has been keen to promote traditional medicine, calling it a “treasure of Chinese civilization” and saying it should be given as much weight as other treatments.

The active ingredient in bear bile, ursodeoxycholic acid, is used to dissolve gallstones and treat liver disease but has no proven effectiveness in treating COVID-19.

China has used both traditional and Western medicine in its battle against the novel coronavirus, which has killed more than 3,000 and infected more than 82,000.

But activists say greenlighting a treatment that uses an animal product is “both tragic and ironic” given that the origin of the deadly coronavirus is linked to the trade and consumption of wild animals.

“We shouldn’t be relying on wildlife products like bear bile as the solution to combat a deadly virus that appears to have originated from wildlife,” Brian Daly, a spokesman for the Animals Asia Foundation, told AFP.

The novel coronavirus is believed to have come from bats, but researchers think it might have spread to humans via an intermediate host mammal species.

Chinese disease control officials have previously identified wild animals sold in a market in Wuhan market as the source of the coronavirus pandemic.

Conservationists have long accused China of tolerating a cruel trade in wild animals as exotic menu items or for use in traditional medicines whose efficacy is not confirmed by science.

“Promotion of bear bile has the propensity to increase the amount used, affecting not only captive bears, but also those in the wild, potentially compromising an already endangered species in Asia and across the world,” Daly said.

There are about 20,000 bears being held in tiny cages under cruel conditions across China to cater to the demand from traditional medicine suppliers, said Kirsty Warren, a spokeswoman for World Animal Protection.

“We estimate the entire market value of bear bile pharmaceuticals to be more than $1 billion,” Warren added.

Bile farming is legal in China — but exports of the product or treatments made from it are banned under the Convention on International Trade in Endangered Species, which China is a signatory to.

“Across Asia, bear bile trade is widespread, although it is illegal in most countries,” said Richard Thomas from animal rights NGO Traffic.

“But the active ingredient in bear bile — ursodeoxycholic acid — is readily synthesised in laboratories, so even if it did prove to be popular, there should be no need for bear bile to be included (in medicines).”

China in February declared an immediate and “comprehensive” ban on the trade and consumption of wild animals that was welcomed by environmentalists.

Beijing implemented similar measures following the SARS outbreak in the early 2000s, but the trade and consumption of wild animals, including bats and snakes, made a comeback.

But in signs that the measures are being taken more seriously this time, the southern city of Shenzhen also passed a law this week banning the consumption of wild animals — including cat and dog meat.

The move was welcomed by animal rights activists, with Humane Society International saying the trade kills an estimated 10 million dogs and four million cats in China every year.

Image: AFP/File / STR Chinese workers collect bile from a caged bear at a farm in Fujian province. Beijing is promoting the use of bear bile to treat coronavirus patients but it has no proven effectiveness

US, China accuse each other of coronavirus fear-mongering