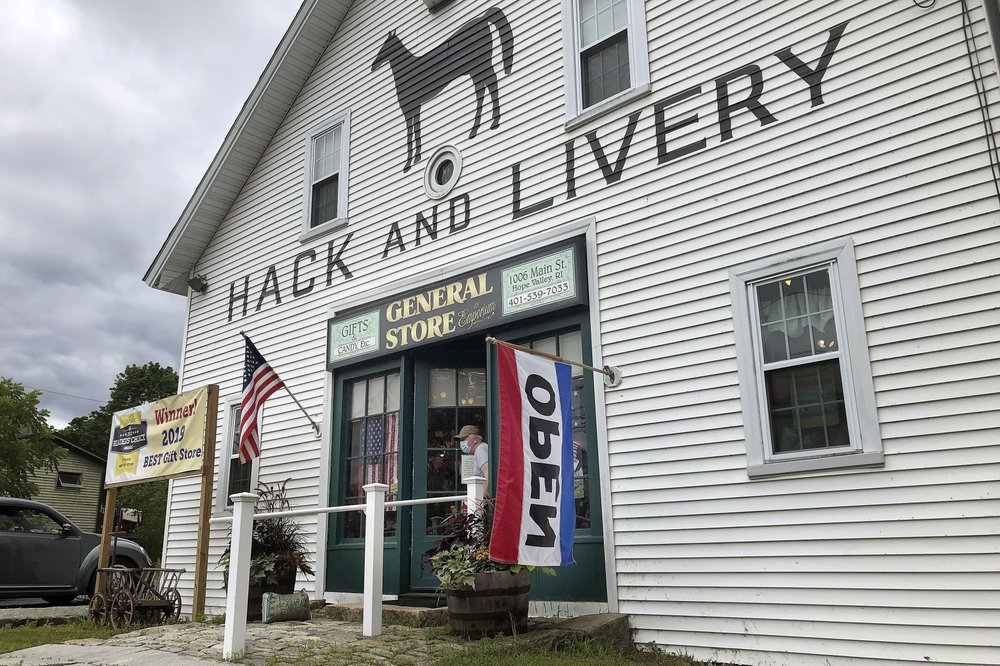 But consider this: What if THESE are the good old days?

Depressing as that might seem after the coronavirus pandemic has claimed well over 630,000 lives worldwide, cost tens of millions their jobs and inflicted untold misery across the planet, it’s entirely possible — increasingly likely, some say — that things will get worse before they get better.

Americans in particular have been optimists by nature for the better part of four centuries. But even here, a bleak dystopian vision is emerging in some corners. It’s not pretty.

It imagines a not-too-distant future where we’ll all look back with nostalgia at 2020 as a time when most of us had plenty of food and wine, could get many of the goods and services we needed, and could work from home at jobs that still paid us.

“This could be as good as it gets, so let’s take pleasure in what we have now,” Katherine Tallman, the CEO of the Coolidge Corner Theater, an indie cinema in Brookline, Massachusetts, told a recent Zoom roundtable.

The pandemic continues to buffet the planet economically, dashing hopes that the worst of the joblessness might be behind us.

For 18 consecutive weeks now, more than a million Americans have sought unemployment benefits. New infections have been surging in states like Florida and California that power the economy, threatening people’s health and livelihoods for the foreseeable future.

That’s bad. But in online forums and on social media, futurists see the potential for worse. Much worse. Their musings aren’t for the faint of heart.

It’s likely that few, if any, of their forecasts will come to pass. This time next year, we may well marvel at how swiftly this existential threat was vanquished. But with the numbers going in the wrong direction, and collective confidence badly shaken, those given to ruinous thoughts can be forgiven for thinking the worst:

— What if humanity’s frantic efforts to produce a viable vaccine take longer than envisioned, allowing the virus to kill indiscriminately in the interim?

— What if that coincides with a climate calamity that ruins crops and shatters supply chains, stripping supermarket shelves bare of much more than hand sanitizer and toilet paper?

— For all our kvetching about masks, could we one day find ourselves having to don hazmat suits just to leave the house?

— Is it such a stretch to imagine the economic fallout moving beyond jobs and 401(k)s and wiping out entire industries — setting off a global Great Depression, Part Two?

The pandemic is “going to get worse and worse and worse,” World Health Organization chief Tedros Adhanom Ghebreyesus told reporters last week. “There will be no return to the old normal for the foreseeable future.”

Even President Donald Trump, in a notable departure from his generally insistent stance that the US has the outbreak under control, said the “nasty horrible” virus “will probably unfortunately get worse before it gets better.”

“We’re getting a taste of what could be ahead if we don’t get control of ourselves here. The empty shelves could be just the beginning,” she said. “It’s hard to imagine, but the climate crisis upon us is probably going to render this a piece of cake by comparison.”

The Rhode Island village of Hope Valley mirrors the new COVID-19 landscape. More is closed than is open, including the local Grange community center, usually a beehive of activity and human connection.

“NO YOGA,” reads a plastic sign out front. “BE HEALTHY BE HAPPY BE SAFE,” it adds, though the hamlet — like thousands of other small towns nationwide — is powerless to help its people accomplish any of those things.

A message board tells residents that yoga classes have been canceled at the Grange Community Center in Hope Valley, Rhode Island (AP Photo/William J. Kole)

For businesses and consumers alike, a new order appears to be dawning — one in which the risk of viral outbreaks increasingly is seen as perpetual, not a one-off.

“These times we’re in right now — perilous as they are — will soon be looked back on fondly as ‘the good old days.’ Prepare accordingly,” tweeted Columbia University philosopher Rory Varrato.

The website Quartz.com asked experts in business, technology, food, the arts and other sectors how the world will be different in five years because of the coronavirus. Their responses? Largely grim.

“My bet is that movie theaters won’t exist,” said one, University of Pennsylvania psychologist Adam Grant.

The pandemic has pummeled airlines and the hospitality industry. The American Hotel and Lodging Association warns that more than 8,000 US hotels could close for good as early as September. Restaurants also are imperiled: Without government intervention, Democratic US Sen. Edward Markey of Massachusetts cautioned this month, “there could be an extinction experience.”

Politics, too, cloud the horizon and moods. For some, a dystopian future includes four more years of Trump’s chaotic presidency; for others, the election of Joe Biden and a sudden lurch back to the left.

As if all that isn’t enough to bring down the room, people love to share word of random supposed signs of the apocalypse — things that certainly aren’t, like the North American invasion of “murder hornets” and that squirrel in Colorado that was found to have been infected with bubonic plague.

That stuff we mostly shrug off. But the future, writ large, is serious business. It is, after all, where we pin our hopes and dreams.

If these do turn out to be the good old days, at least there are things for which we legitimately can be thankful: more time and meals together with loved ones; an extended reprieve from soul-sapping commutes; and — for some of us — a greater emotional investment in our children, if only because we’re seeing a lot more of each other.

“Even now, we can find joy in a day,” said Hetherman, the futurist. “Even if we’re in a hazmat suit, God help us, we’ll have to find what joy we can.”

Image: A man wearing a mask leaves a gift shop on Wednesday, July 15, 2020, in Hope Valley, R.I. Could these be the good old days? Futurists and others say people may actually look back at 2020 with nostalgia if the coronavirus pandemic lingers and health and economic concerns worsen. (AP Photo/William J. Kole)