DAMASCUS, Syria (AP) — At a building site in Damascus, trucks and bulldozers zigzag back and forth ferrying sand and stones for a luxury development of residential high-rises and shopping centers.

The area was up until recently a working-class neighborhood of informal settlements and irregular housing running through orchards and farmland — one that early on in Syria’s conflict was a hub for protests against the government. Over the past year, thousands of residents have been evicted and their property razed to make way for the multimillion-dollar project that promises to be the new commercial center for the capital.

Marota City, as Syria’s largest investment project is known, is seen as setting the blueprint for how the government will undertake the ambitious rebuilding of areas devastated in the nearly eight-year civil war.

The government is using controversial new property laws to create zones where partnerships of the government and businessmen take ownership of neighborhoods and redevelop them. Officials say the projects aim at re-planning slums and destroyed areas and attracting private investors to join the massively expensive task of reconstruction.

Critics say President Bashar Assad is using such projects to consolidate post-war power, expropriate property and reshape Syria’s demographics by pushing out impoverished communities seen as centers of opposition support and replacing them with wealthier ones more likely to be loyalists.

The 53-year old president has survived the war, using help from allies Russia and Iran to crush an armed rebellion that aimed to oust him.

The Marota project lies at the heart of Syria’s tangled web of politics and rebuilding. Having recaptured the country’s key cities from the opposition, the government says it is now time to focus on rebuilding. But Western countries, including the United States, say they will not commit any funds to reconstruction without real progress on a political settlement.

The plan for upscale apartments and glossy malls in Damascus can seem particularly jarring with the enormous destruction in former rebel-held areas just a few miles away and in the rest of the country, where entire city blocks lie crumped, in scenes reminiscent of World War II.

Marota is being built over a southwestern neighborhood called Basateen al-Razi that grew up on farmlands over the past decades as poorer Syrians moved in from the countryside and built unlicensed housing. The district saw anti-government protests in 2012, but they were swiftly suppressed in a crackdown, and the area was relatively untouched by the war’s destruction.

The project was approved in 2012 with a legislative law known as Decree No. 66, which authorized the government to redevelop slum dwellings and illegal housing areas in the capital. 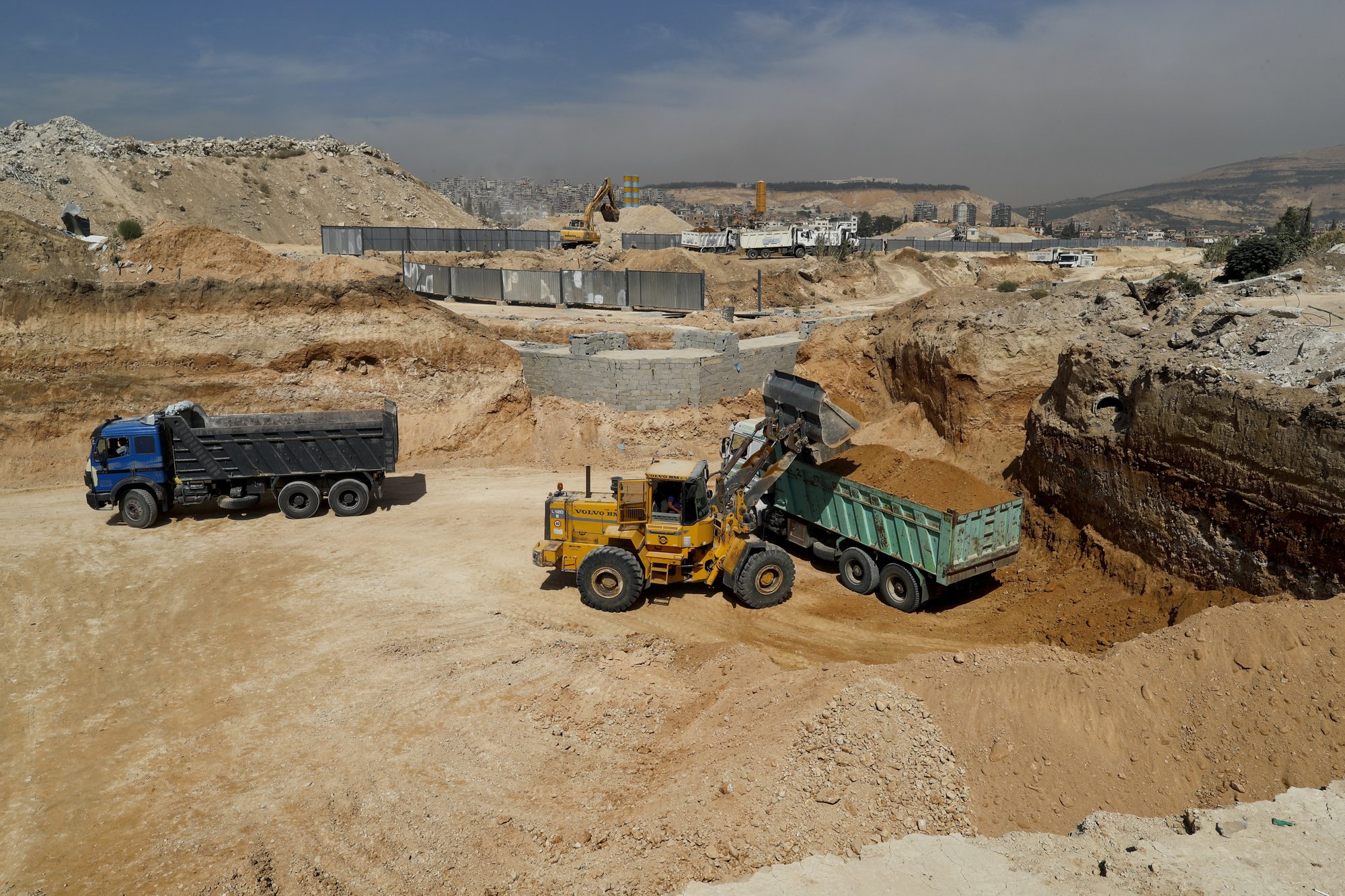 This allowed the Damascus governorate to evict the population, which has largely dispersed to other, inexpensive parts of the capital, and level the district.

The project is managed chiefly by the Syrian government, under a joint-stock company called Cham Holding established in 2016 and owned by the Damascus governorate. It has attracted investments from businessmen known to have close ties to the Syrian leadership, including Samer Foz, a wealthy entrepreneur whose name became well known during the war and who recently bought majority shares in the landmark Four Seasons hotel in the capital. The company is also said to be linked to Rami Makhlouf, Assad’s cousin and one of Syria’s most powerful businessmen.

Speaking to The Associated Press at the company’s stylish headquarters adjacent to the building site, he said the company has so far spent the equivalent of $70 million on infrastructural works for the 2.14 million square meter development. Construction is expected to begin before the end of the year. The project will provide 12,000 housing units for an estimated 60,000 residents.

Marota will be followed by a similar project further south on an area four times bigger, called Basilia City, Nabolsi said, adding that plans to develop these areas existed before the Syrian conflict erupted in 2011.

In April, the government passed controversial property Law No. 10, which expanded the geographic scope of decree 66 beyond Damascus to the rest of the country and extended it from informal settlements to regularly registered property.

Under Law 10, residents initially had just 30 days to prove that they own property in redevelopment zones in order to receive shares in the projects or alternative plots of land; otherwise, ownership will be transferred to the local government.

The law created panic among refugees abroad, many of whom had lost property deeds or could not return to prove ownership. After an international outcry, Syria’s foreign minister announced in June that the 30-day filing period would be extended to a year. Last month, a U.N. official said Syria’s government has withdrawn the law, citing Russia for the information.

However, there is no sign that the law has been formally amended or confirmation that it has been withdrawn.

At least four former-rebel held areas in and around the capital are now being considered for redevelopment under Law 10. They include Barzeh, Jobar, Daraya and Qaboun, where major demolitions are already underway, according to a Human Rights Watch investigation.

Sara Kayyali, Syria researcher at HRW, said the fact that the designated areas are all former rebel-held bastions and the lack of transparency around the property laws only exacerbates suspicions.

“The government’s urban planning laws are often used to confiscate the property of residents, leave them without any alternative housing and never provide them with compensation, so violating their property rights on more than one level,” she told the AP.

A resident of Damascus’ Mazzeh neighborhood whose family owns property in nearby Basateen al-Razi and closely follows the subject said the new property laws were not necessarily a bad thing, but the implementation gives the impression that the government is driving out poor residents and attracting the rich.

She said demolitions started without the provision of alternative housing, and rental money offered was often insufficient to rent within Damascus. She spoke on condition of anonymity for security concerns.

Nabolsi rejects the claims and argues that everyone has been more than fairly compensated.

He said there is nothing wrong with developing society, adding that the Syrian crisis was fueled by poor people who were exploited.

“The mistake of the government is that it did not develop these areas and let them transform into illegal housing areas, and we paid a high price for this.”

Kayyali said there is concern that the laws will be used as a form of “collective punishment” against government opponents and dispossess the poor.

“It’s going to exacerbate the socio-economic imbalance that was actually one of the causes of the uprising,” she said.

Will Erdogan finally deliver on his vow to invade northern Syria?

Will CBE raise interest rate in next meeting?